After a week-long strike, unions have accepted South African Airways's offer. Economists believe the state-owned airline’s crisis is only the tip of South Africa's problems. 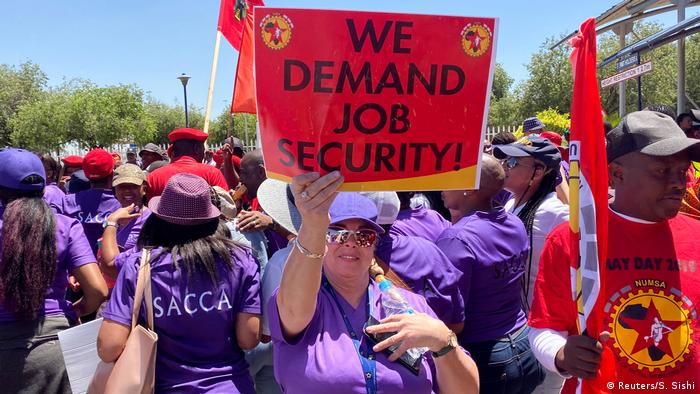 The National Union of Metalworkers of South Africa (NUMSA) and the South African Cabin Crew Association (SACCA) had demanded an 8% pay rise and wanted to halt plans to cut over 900 jobs of the airline. On Friday, November 22, the unions accepted South African Airway's (SAA) offer of a 5.9% wage increase ending the week-long deadlock.

The airline had argued that it could not meet the demands of the unions, and might not have been able to maintain the status quo if the strike continued. "We may not have enough cash to pay salaries at the end of the month," SAA board member Martin Kingston told the Reuters news agency. Many economists believe that the airline, which hasn't produced financial statements for the past two years, is practically insolvent.

Tessa Dooms, a political analyst and development consultant, believes that instead of loading off its problems on its service staff, the airline could look more at its internal structure. The problem is the income inequality, said Dooms in an interview with DW. Some staff members like the management and the pilots, who already have higher salaries, have had increases over the years, while service staff have not. "Income inequality is largely what has been able to give momentum to the strike," she said.

Over the past week, the formerly strongest African airline has managed to continue operating some of its flights, but it continues to be on shaky ground, as unions representing its remaining staff members are contemplating whether to join the strike or accept the airline's conditions. On Thursday, November 21, SAA announced that it would suspend flights to Hong Kong until mid- December, but it has continued to run a number of international and domestic flights.

Economic analyst Daniel Silke believes the strike was just a precursor of the state's general economic woes. "It occurs within the context of the necessity to restructure many of South Africa's state owned enterprises that have been inefficiently run and of course have now racked up huge amounts of debt," Silke argued. The airline has literally been going to the government cap in hand, he explained, to receive the financial boost it needs to stay afloat.

Pravin Gordhan, South Africa's minister of public enterprises, who met with union officials earlier in the week, said that he was still committed to saving the state-owned airline. Yet in a statement published by the ministry he also said that the government was not in a position to provide more financial support. "Over the past three years, the government has provided more than R20.5 billion ($1.3 billion, €1.26 billion) of fiscal support to SAA," the statement read. "The funds that the government has committed to provide over the next three years have been earmarked for the repayment of SAA's outstanding debt." The statement added that the strike was exacerbating the airline's financial crisis. 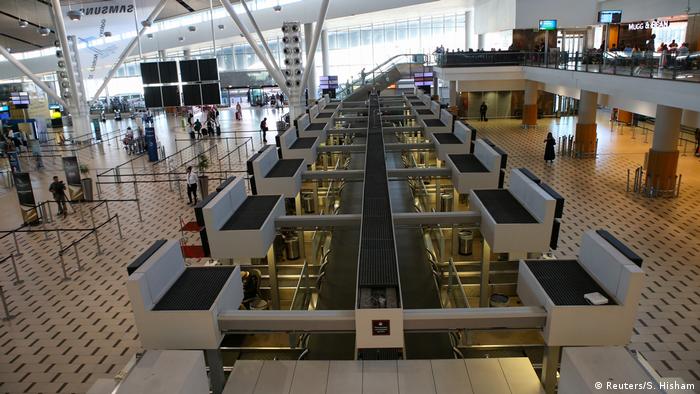 The battle between the traditionally strong trade unions and the airline, which through successful branding is seen as "proudly South African," is in some ways of a battle of the giants. Many analysts believes that an even bigger battle could ensue if or when the state-owned electricity company Eskom follows suit. Finance Minister Tito Mboweni has already cracked down on Eskom, saying that the government would no longer give it additional cash injections, unless the company proves that it is committed to solving its problems.

"I think that what we are seeing now are first signs of the South African government being willing to take the battle to the trade unions and to be somewhat tougher with the trade unions when it comes to wage demands,” Daniel Silke said. In his opinion, cutting jobs and keeping the salaries low is one of the only ways that SAA can become more stable in order to make itself more attractive to potential investors.

Silke's argument which echoes that of SAA interim Chief Financial Officer Deon Fredricks, who this week said they need to stabilize the "sick child before anyone will want to even look into partnering with us." Fredricks, however, also noted that the airline's crisis was a symptom of state capture — the economic and political scandals that have been plaguing South Africa for the past few years. The graft scandals were ultimately what brough former president, Jacob Zuma, to his knees, and have proved increasingly difficult for his successor

‘ANC has to rethink'

The question of selling parts of the airline off to private investors is something that airline officials and even the government are now talking about openly. Ethiopian Airlines and Virgin Atlantic are rumored to have expressed an interest in it. "For this government to now think about the possibility of finding some sort of private equity partner for one of its state-owned enterprises is quite a big ideological shift for the ANC government to make," explained Silke.

But there are still many opponents to such a move. "I strongly hold the view that the question on privatizing something like SAA or Eskom is almost a counterproductive way of thinking," said analyst Tessa Dooms. The fact that investors and other airlines have shown an interest in SAA, show that it has value, Dooms argued. Moreover, she believes that the success of state-owned airlines like Ethiopian Airlines and RwandAir shows that there is a market for such airlines in Africa and the state-run enterprises can survive.

In Doom's eyes, South Africa has a few other options. "One of those options is around the tax base itself," she argued. "Instead of going into equity deals, perhaps [South Africa show start] thinking about a wealth tax or wealth provident fund even — something that gets the money invested into the state — but into a state that people can trust." Rebuilding that trust, however, is one of the ANC government's biggest problems.