South Africans have taken to the streets to protest a controversial advertisement by retail chain Clicks. Opponents said the ad was not only racist but insensitive toward Black people's identity. 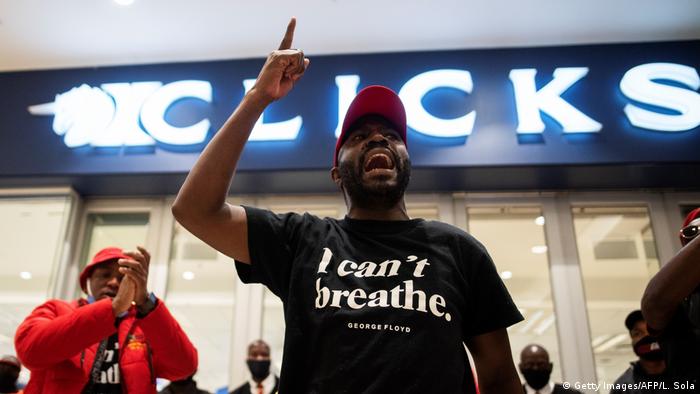 Protests in South Africa forced dozens of stores of the country's largest pharmacy chain to close on Monday after an advert accused of racism triggered widespread anger.

Leaders of the opposition Economic Freedom Fighters (EFF) party led the protests against the nationwide retailer Clicks. The EFF said it wants the retail chain to shut for five days.

The government issued a statement over the advertisement, saying it felt "disturbed by the crude racist display," but added that the "acts of lawlessness of vandalizing and burning down" of Clicks stores "go against the spirit of peace and respect for human rights."

Protesters accused the retailer of racism and of being insensitive toward Black people's identity and physical characteristics.

In Polokwane, Limpopo province, EFF leader Julius Malema led a group of more than 100 supporters who chanted in front of a Clicks store.

"White people insult us and they apologize, they think that is the end," he said. "We have been projected as ugly people for a very long time by white people. It has got to come to an end at some point and it starts total with Clicks, we are tired." 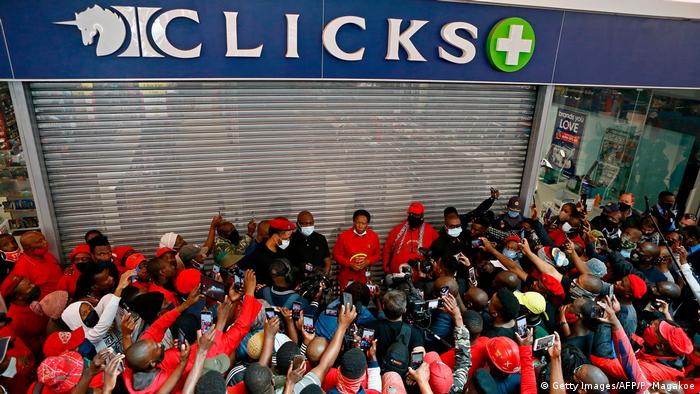 Malema and his supporters picketed this Clicks branch in Polokwane

EFF Deputy President Floyd Shivambu, who led the protest at a Clicks store in Johannesburg's high-end Sandton suburb, said the EFF would not allow the retailer to resume normal operations until it took specific measures to address its problem with racism.

Shivambu said Clicks should disclose the names of all people involved in commissioning the advertisement and the name of the company which produced it. Clicks should also provide evidence it had taken action against them.

"Unless they do that, Clicks will not be open in all parts of South Africa," Shivambu told AP. "We are not going to agree to allow racist institutions to be allowed to continue existing as if nothing is wrong."

Clicks has since issued an apology to the public and said it had suspended two employees who were involved in producing and publishing the advertisement.

"I understand the emotions that are coming through from society… When I looked at those images it took me two seconds to realize how insensitive they were. I don't know why we posted them," Clicks CEO Vikesh Ramsunder told radio station CapeTalk on Monday.

Police violence has increased all over the continent. In most cases, perpetrators get away without appropriate sanctions, dealing a blow to the relationship between law enforcement and the public.