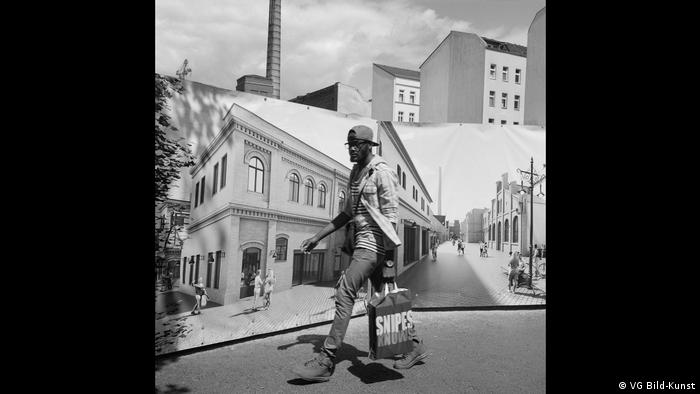 A fashionably dressed young man walks in front of a billboard at a construction site in Berlin. He blends in with the sparkling new buildings depicted on the sign so seamlessly, it is as if he has stepped onto a movie set. Yet, he was simply a passer-by who happened to fit perfectly in the shot.

"That" says photographer Akinbode Akinbiyi "is serendipity." Serendipity is one of the main elements the photographer tries to capture in his photos, a selection of which can be seen in his exhibition, "Six Songs, Swirling Gracefully in the Taut Air"at Berlin museum Martin-Gropius-Bau, on until July 19, 2020.

Featuring Akinbiyi's signature black-and-white medium-format photography, the show depicts scenes from daily life in Johannesburg, Lagos, Athens and Dakar, as well as Berlin, where he resides. "Rarely has a photographer journeyed this extensively to carve out an an encyclopedic suite of images consistently tracing realities across the African world and beyond," writes curator Natasha Ginwala, who selected the photographer.

Born in 1946 in Oxford, England to Nigerian parents, Akinbode Akinbiyi moved to Germany to do a PhD in literature in Heidelberg in the 70s after studying in Nigeria, and remained in Germany.

For the last 30 years, he's been based in Berlin, yet his travels are frequent and he often returns to Africa to teach workshops and embark on what he calls "deliberate wanderings" to snap images at the right time and place.

"I've been doing this for about 40 years now and the more you do it, the more you get to see the way things work together; serendipity or happenstance, or coincidence," he told DW. "You know, it's just things coming together." 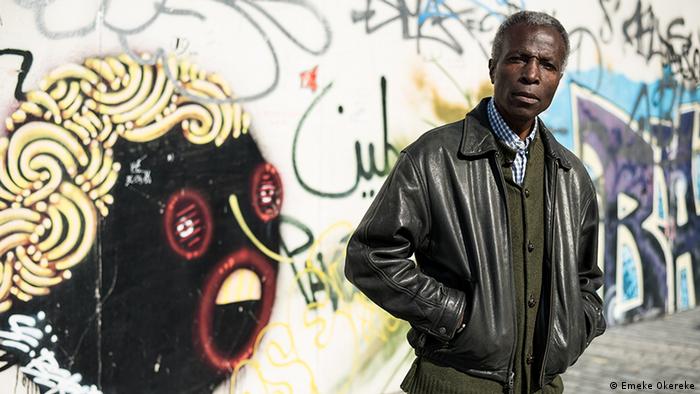 Akinbode Akinbiyi has been taking photographs for 40 years

The dark colonial legacy of the 'African Quarter'

One area of the photographer's interest is the so-called African Quarter in the Berlin neighborhood of Wedding. Even though the area is in fact inhabited by many African migrants, its moniker has more sinister origins. After the First World War, wild animal merchant Carl Hagenbeck planned to open a large zoo in the area, which was to include humans from Germany's African colonies.

Although the plan never came to fruition, 25 streets in the area were named after African countries, as well as a few named after Germans who played significant roles in driving Germany's colonial expansion in East Africa in the 1880s and 1890s.

Three streets, Petersallee, Nachtigalplatz, and Lüderitzstrasse, are to be renamed after a five-year campaign by NGOs. Adolf Lüderitz was a German businessman who claimed the coastal strip of Africa from Angola to South Africa.

The city of Lüderitz in Namibia, named after him, was near Shark Island where the German colonists built concentration camps for the local Herero and Namaqua people between 1904 and 1908 after an attempted uprising. Thousands of them died, many in concentration camps. It is considered by historians to have been the first genocide of the 20th century.

In his photo series "African Quarter," Akinbiyi visits these streets, shooting everyday scenes of children playing and encounters with the neighborhood's African community. "I started going there at the beginning of the millennium and took many photographs. At that time it was very quiet, very residential. It's gotten a bit more lively." He is especially keen on the area's architectural mélange, from Bauhaus buildings to ornate Gruenderzeit edifices from the end of the 19th century.

But Akinbiyi does not shy away from the neighborhood's colonial controversy. In one photo, he captures a street sign named after one of the German colonial leaders which was covered by a local activist with the name of Namibian resistance fighter Hendrik Witbooi. A corner has been torn down, perhaps a reminder that not everyone is happy with the proposed name change. 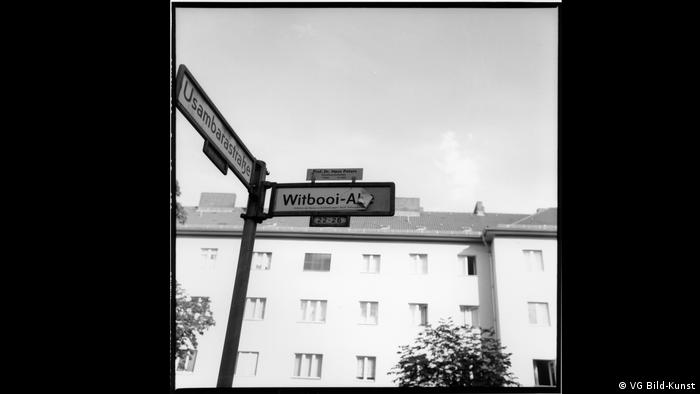 Not a new debate: On 2005, activists covered the sign Petersallee with 'Witbooi-Allee'

In December, the far-right political party AfD argued against the movement to change the names of streets honoring the colonial legacy.

"I think these kinds of things should be revised, thought about and very much change," ponders the photographer, who falls short of condoning activists tearing down statues as they have in Belgium and the UK in recent days.

In search of tolerance

For Akinbiyi, the present political currents with protests in the US after the death of George Floyd are a sign of a broader malaise: a disconnect in society. "OK, it's a black-white problem, but it's also a human problem. We are so inhumane with each other. I photograph all these things in as photographic a way as possible. All the time I'm thinking about these things on my wanderings and trying to sometimes see an image which says something about it."

Some of his works deal with advertisements and other forms of graphic art which depict black people disrespectfully: "I want to show the imbalance. I'm trying to find a way back to a balanced society, [where] we don't disrespect each other. It can be very difficult at times and we all have our prejudices and tolerances and intolerances but I think we wanderers really have to work on this."

The Nigerian photographer has lived in Germany for 50 years but frequently travels around the world to capture scenes from urban streets to vast coasts. His work is shown in an exhibition in Berlin. (19.06.2020)