Human zoos: When people were the exhibits | Culture | Arts, music and lifestyle reporting from Germany | DW | 10.03.2017

Human zoos: When people were the exhibits

From the German Empire through the 1930s, humans were locked up and exhibited in zoos. These racist "ethnological expositions" remain a traumatizing experience for Theodor Wonja Michael. 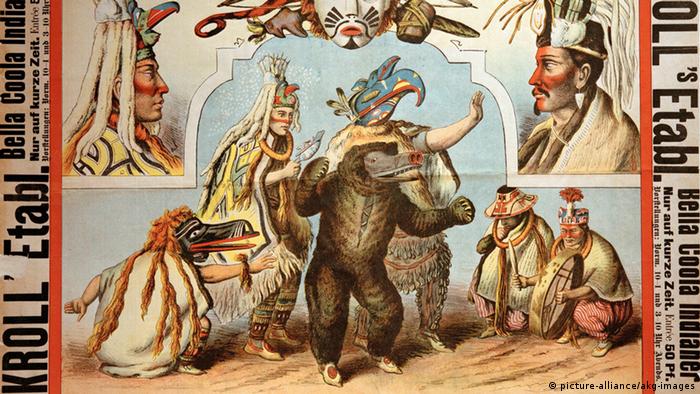 "We went throughout Europe with circuses, and I was always traveling - from Paris to Riga, from Berne to Bucharest via Warsaw," remembers Theodor Wonja Michael. He is the youngest son of a Cameroonian who left the then German colony at the turn of the century to live in the German Empire.

"We danced and performed along with fire-eaters and fakirs. I began hating taking part in these human zoos very early on," says the now 92-year-old. For several years, did stopped talking about that period in his life. Then in 2013, Theodor Wonja Michael wrote about his and his family's story in the book "Deutsch sein und schwarz dazu" (Being German and also Black). 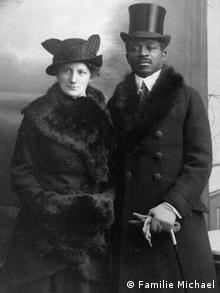 Theodor Wonja Michael's parents: His mother was German and his father from Cameroon

Traveling with a human zoo

At the time, performers of a human zoo would tour through Europe just like rock bands today. They were scheduled to do several presentations a day while visitors would gawk at them.

"In some cases, the performers had contracts, but they didn't know what it meant to be part of Europe's ethnological expositions," says historian Anne Dreesbach. Most of them were homesick; some died because they didn't manage to get vaccinated. That's how an Inuit family, which was part of an exhibition, died of smallpox after shows in Hamburg and Berlin in 1880. Another group of Sioux Indians died of vertigo, measles and pneumonia. 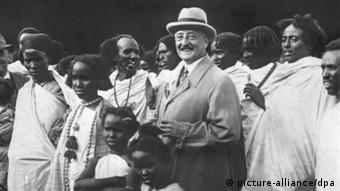 A 1927 photo of Carl Hagenbeck, surrounded by the Somalians he put in a Hamburg zoo

The first big ethnological exposition was organized in 1874 by a wild animal merchant from Hamburg, Carl Hagenbeck. "He had the idea to open zoos that weren't only filled with animals, but also people. People were excited to discover humans from abroad: Before television and color photography were available, it was their only way to see them," explains Anne Dreesbach, who published a book on the history of human zoos in Germany a few year ago.

An illusion of travel

The concept already existed in the early modern age, when European explorers brought back people from the new areas they had traveled to. Carl Hagenbeck took this one step further, staging the exhibitions to make them more attractive: Laplanders would appear accompanied by reindeer, Egyptians would ride camels in front of cardboard pyramids, Fuegians would be living in huts and had bones as accessories in their hair. "Carl Hagenbeck sold visitors an illusion of world travel with his human zoos," says historian Hilke Thode-Arora from Munich's ethnological museum.

"In these ethnological expositions, we embodied Europeans perception of 'Africans' in the 1920s and 30s - uneducated savages wearing raffia skirts," explains Theodor Wonja Michael. He still remembers how strangers would stroke his curled hair: "They would smell me to check if I was real and talked to me in broken German or with signs."

Theodor Wonja Michael's family was torn apart after the death of his mother, who was a German seamstress from East Prussia. A court determined that the father couldn't properly raise his four children, and operators of a human zoo officially became the young Theodor's foster parents in the 1920s. "Their only interest in us was for our labor," explains Michael.

All four children were taken on by different operators of ethnological expositions and had to present and sell "a typical African lifestyle" for a curious public, like their father had done previously. For Theodor Wonja Michael, it was torture. 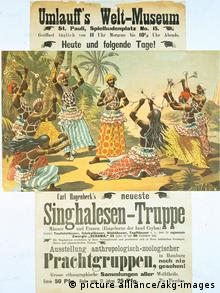 An 1883 advertisement for a show organized by Carl Hagenbeck

Just like fans want to see stars up close today, visitors at the time wanted to see Fuegians, Eskimos or Samoans. When one group decided to stay hidden in their hut during the last presentation of a day in a Berlin zoo in November 1881, thousands of visitors protested by pushing down fences and walls and destroying banks. "This shows what these expositions subconsciously triggered in people," says Dreesbach.

Theodor Wonja Michael was nine years old when his father died in 1934, aged 55. He only has very few memories of him left. From his siblings' stories, he knows that his father worked as an extra on silent films at the beginning of the 1920s. The whole family was brought with him to the studio and also hired as extras because they were viewed as "typically African."

Several human zoos stopped running after the end of World War I. Hagenbeck organized his last show of "exotic people" in 1931 - but that didn't end discrimination.

If reduced to a footnote compared to the Nazi era, German colonial rule is still a painful chapter of history, leading to the first genocide of the 20th century. A Berlin exhibition deals with the still relevant issue. (17.10.2016)

Avoiding racism: the struggle to use the right words

Who would openly call themselves racist today? Still, racism echoes through even the seemingly most benign words. Literary scholar Susan Arndt has taken a closer look at how racism permeates language and society. (06.03.2017)

Robin Rhode: Painting in black and white, but only in art