If reduced to a footnote compared to the Nazi era, German colonial rule is still a painful chapter of history, leading to the first genocide of the 20th century. A Berlin exhibition deals with the still relevant issue.

In a time of resurgent xenophobia and racism, stereotypes from colonial times are being heard more frequently again - making it more important than ever to study the historical background to these ideologies.

"These are the views that led to the Nazis' war of extermination and to Auschwitz," says historian Jürgen Zimmerer, an advisor to the exhibition "German Colonialism, Fragments Past and Present" now shown at the Deutches Historisches Museum. The exhibition aims to tackle these issues and sensitize people, adds the professor.

This call to awake the German population is both urgent and subtle in the presentation. The exhibits in glass cases seek to reveal German colonial history by telling the small stories.

Predecessor to the Holocaust

This might be why Germany's colonial past was never the subject of much historical consideration, explains Zimmerer, head of the department of Global History, Focus Africa, at the University of Hamburg and of the research center "Hamburg's (Post-) Colonial Heritage." Another reason, he adds, is that the country's historians were mainly occupied with analyzing the Third Reich.

Another Eurocentric explanation as to why Germany's colonialism has been largely understudied, says Zimmerer, is: "Many claim, 'It wasn't that bad, it was only 30 years.' How absurd. The Nazi rule lasted 12 years, and no one says that such a short period makes it irrelevant. Yet that argument keeps being used for the colonial period."

Namibia (known as German South-West Africa during colonial rule from 1884 to 1915), Togo and Ghana in western Africa, Cameroon in central Africa and Tanzania (then called German East Africa) were former German colonies. Otto von Bismarck, then Chancellor of the German Reich, initially rejected colonial acquisitions, but the public and the elite demanded them, so he allowed colonization in 1884.

The first 15 years under German patronage were characterized by unfair treaties, racism and violence. 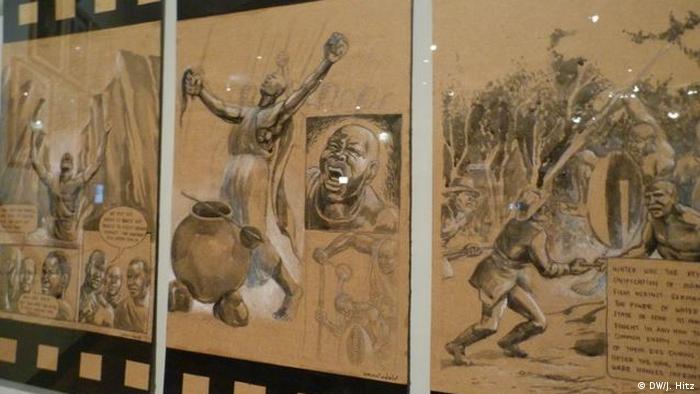 The situation in German South-West Africa, the only colony to which large numbers of Germans were sent as settlers, was particularly atrocious. Germans felt that the white ruling class should be in charge of the country and restructure it without consideration for the indigenous population, explains Zimmerer: "Thirty years before the Nuremberg Laws, there was a 'racial law' in South-West Africa that forbade mixed marriages and stigmatized sexual relations between German men and African women. The equivalent later existed in reference to the Jews under the Nazis, and it was called racial defilement."

When the Herero and Nama people rebelled against German colonial rule in 1904, a campaign of racial extermination was launched. By 1908, up to 80 percent of the Herero population had died - about 80,000 people. Some 10,000 Nama were also killed, practically half of the people's population.

Only in 2015 was this genocide - which preceded the Holocaust by over 30 years - first officially declared as such by the German government. The German Foreign Ministry is currently working out a joint declaration with Namibia.

Even though the German Historical Museum's director, Ulrike Kretzschmar, says they wanted the exhibition to be politically neutral and objective, it is contributing to current political developments.

Msuya, an expert on the Maji Maji Rebellion, observed how historical depictions of that war contrast in Tanzania and Germany: "To us, Maji-Maji warriors are heroes, there's a memorial day for them. German records here usually describe them as rebels."

The Tanzanian historian finds the exhibition's link to current politics particularly interesting and important: "I believe we've made a great step forward ," she said. "But to get a realistic view of their colonial history, Germans probably need further discussions and exhibitions.

The African contributions provide perspectives that go beyond the existing narratives in Germany.

"Onetime colonial powers still profit from the fact that they were colonial powers, as they have greater academic resources. Yet working through the history of this era must be done with exchanges from the countries involved. This needs to be substantially funded by Europe - and that requires a shift in perceptions," said Zimmerer.

The exhibition "German Colonialism, Fragments Past and Present," runs from October 14, 2016 through May 17, 2017 at the German Historical Museum in Berlin.

An exhibition at the German Historical Museum in Berlin is the first major show exploring the painful chapters of Germany's colonial rule. (17.10.2016)