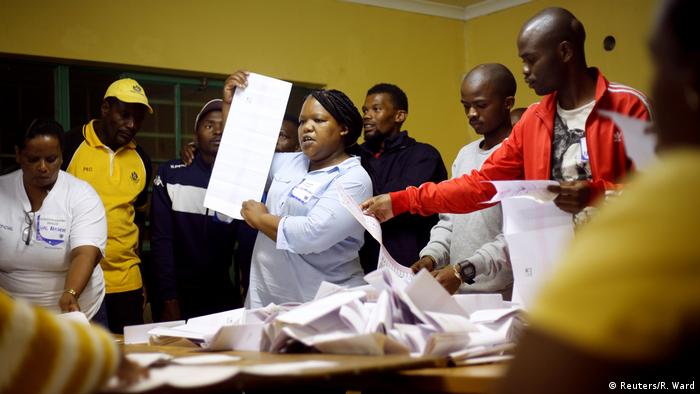 With about 72% of ballots counted, the African National Congress (ANC) is predicted to win around 57% of the vote. If the result stands, it will be the party's worst electoral showing since it came to power 25 years ago.

The voter turnout was relatively low in Wednesday's poll — dropping to 65% compared to 74% in 2014 — as voters said they were disillusioned by widespread corruption and unemployment.

The election commission said final results may not be declared until Saturday.

Opposition parties have leveled corruption allegations against the ANC leadership, which according to observers have dented its image. South African political analyst Makhosini Mgitywa told DW that although voters had become increasingly disillusioned with the long-ruling party, some were reassured by its recent efforts to change.

"The ANC elected a leader who does not only talk about but does practical things against corruption. He opened a process through institutions and commissions to do away with that. People see these things and think, 'The ANC will take the corner,'" he said.

In addition to persistent corruption issues, land rights were also a key issue in the election campaigning. Both the ANC and the far-left Economic Freedom Fighters (EFF) promised land expropriation without compensation. The issue has worried some white South Africans, who still own the vast majority of private land in the country even decades after the elimination of apartheid. That anxiety is tied to the white nationalist party Freedom Front Plus (FF+), which has seen a surge in votes in this election; the Afrikaner party is polling at 2.8% of the vote so far, as compared to less than 1% in 2014.

Independent political analyst Sinesipho Maninjwa told DW that there is an observable pattern to the rise of FF+. "From a numbers perspective, one can see how much they have grown. It has to do with the rise of white nationalism globally and the global movement of antipathy towards white people, especially in Africa. And [whites] feel they do not want land without compensation," she told DW.

Read more: 25 years on, what happened to Mandela's dream?

A weakening economy has also dogged the ANC in recent years and contributed to its falling levels of support in major cities.

There were also administrative problems, including a lack of ballots at a number of polling stations, causing very long delays. Millions of South Africa's eligible voters also failed to register to cast ballots.

Under South Africa's parliamentary system, the National Assembly chooses the country's president after the elections.

DW correspondent Martina Schwikowski in Johannesburg contributed to this report.

President Cyril Ramaphosa is hoping that his African National Congress (ANC) keeps its majority despite a low turnout. The party has won a majority in every election since the end of apartheid in 1994. (08.05.2019)

Rapper and scholar Sizwe Mpofu-Walsh is offering a journey into the "heart of the 2019 South African election" on his innovative WhatsApp channel, #SMWX. (07.05.2019)