In a fresh outburst of xenophobic violence in Johannesburg, at least one person has been killed after police clashed with looters. The violence follows a week of attacks on migrant-owned businesses in South Africa. 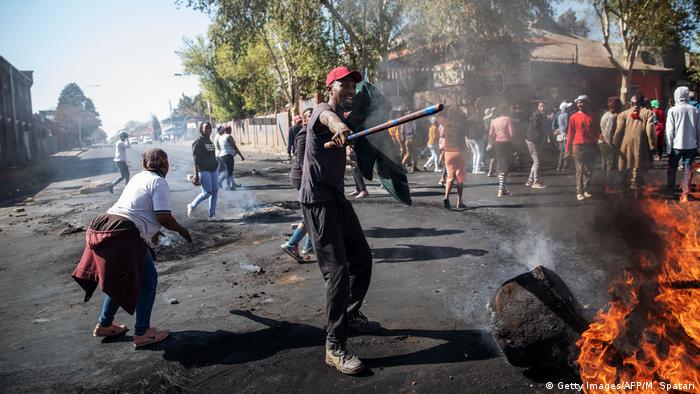 Security forces in Johannesburg confronted looters with stun grenades and rubber bullets on Sunday, in an attempt to break up crowds targeting migrant-owned businesses in the city's Central Business District. At least one person was killed and five others were injured.

The violence is the latest in a slew of anti-migrant attacks in South Africa's biggest city and elsewhere in the country. At least 10 people have been killed in the attacks, which have also sparked protests in several other African nations.

Police later put out a tweet stating that the situation had been brought under control.

Police spokesperson Xlolani Fihla confirmed the fatality to news agency Agence France-Presse following Sunday's unrest, though the cause of death was unable to be confirmed.

In a video address on Twitter on Thursday, South African President Cyril Ramaphosa said attacks on businesses run by foreign nationals is "something totally unacceptable, something that we cannot allow to happen in South Africa."

Critics, however, have said the government has failed to address the serious problem of xenophobia in the country.

South Africa is a major destination for economic migrants from neighboring Lesotho, Mozambique and Zimbabwe. Others come from South Asia and Nigeria looking for work in the continent's second-largest economy.

Despite its large economy, the nation is still struggling with an unemployment rate of 29% — a 16-year high — leading to growing desperation and tension among those out of work. There have also been complaints of corruption against the ruling ANC party placing strains on public services, despite Ramaphosa's pledges to tackle the issue.