Why buy yeast when you can cultivate wild yeast at home? There's a simple science to sourdough. It's a living, fungal bacteria that demands dedication, love and time — and the rewards are nutritious and healthy. 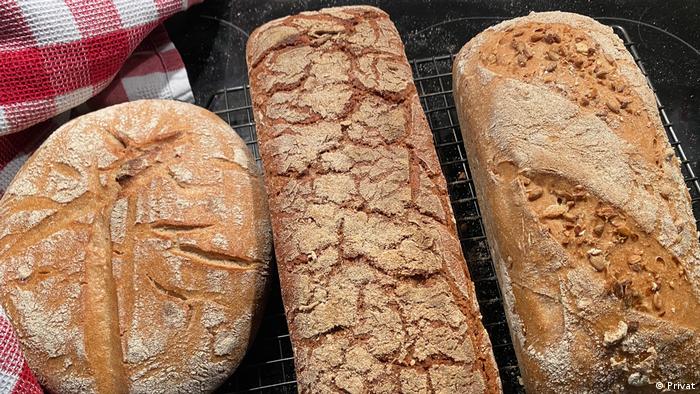 Bread has been a source of basic nutrition for centuries, the holy trinity being wheat, maize and rice. It has also been the reason for a lot of innovation in science and technology, from millstones to microbiological investigations into a family of single-cell fungi called Saccharomyces.

There are breads of all shapes and sizes the world over — from flats and soda breads to buns, baguettes and boules, tinned loaves, crackers, plaits and sticks, baked with a griddle, in a Dutch oven or on a stone.

Jewish communities eat unleavened bread, or "matzo," at the Passover. It's flour and water, mixed and baked in under 20 minutes to prevent the dough from fermenting.

Read more: Will coronavirus spark a wave of food nationalism?

Ancient Greeks also made unleavened breads until about the last century BC, when leavens were introduced, and wheat flour replaced barley meal.

Asian chapatis and rotis and other Middle Eastern flatbreads, such as an Egyptian "aiysh," Palestinian "shrak," Syrian "aiysh shami" or Turkish "pide" are variations of the same, often wholemeal, bread that's used for scooping up saucy food. Some use leaven; others do just fine without. They are fast-action, practical breads.

If you like a little heft in your loaf, you will need a leavening agent.

For those short on time, you can use baking soda. That's a chemical compound of sodium bicarbonate mixed with potassium bitartrate, or cream of tartar.

Soda breads have their traditions in parts of eastern and central Europe, and in Ireland and Scotland, with Melrose loaves and "farls."

They can taste a bit bland, though, and are often considered only as an emergency solution on Sundays. No disrespect intended: They taste just fine fresh from the oven.

Whether it's chemical or more "natural," leavening relies largely on the production of carbon dioxide.

When you mix an acid, such as vinegar, buttermilk, yogurt or apple cider, with an alkaline compound like baking soda, you get CO2. That CO2 creates bubbles, which in turn capture steam in the oven and allow a bread to rise.

But it's better with yeast. Tastes better, too. It just takes more time.

There are yeasts all around us — on grains, in the air, in biofuels. It even lives inside us, but that's not always a good thing. 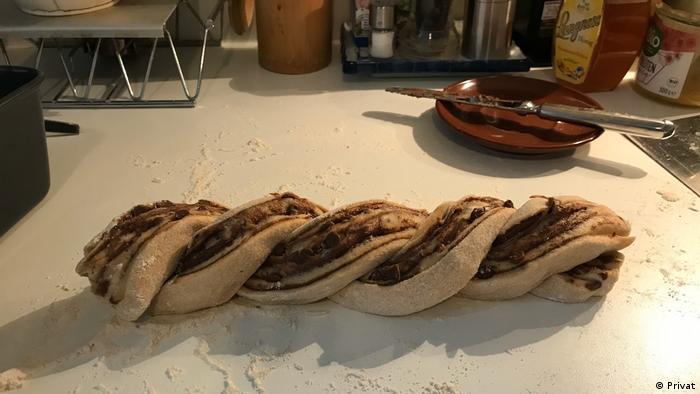 Yeast can be used for a variety of things, even chocolate babka, but let it rest and rise

Candida yeast can cause infections of the skin, feet, mouth, penis or vagina if it builds up too much in the body.

One of the most common yeasts, however, is Saccharomyces cerevisiae. That's "brewer's" or "baker's" yeast.

You can get fresh baker's yeast, often in 42-gram (1.48-ounce) cubes, or as dried yeast (quick action or active, which requires rehydration) in a sachet of 7 grams.

There's little difference: One is compressed and the other is dehydrated and granulated. But they do the same thing, essentially.

Some commercial yeast producers add molasses and other nutrients. But natural yeast has plenty of useful nutrients in it anyway, including B group vitamins, so who knows whether it's good or necessary to add them.

How does yeast work?

When you mix flour, yeast and water, you set off a veritable chain reaction. Enzymes in the wheat convert starch into sugar. And the yeast creates enzymes of its own to convert those sugars into a form it can absorb.

The yeast "feeds" on the sugars to create carbon dioxide and alcohol. The yeast burps and farts, releasing gases into the mix, and that creates bubbles to trap CO2.

It's a vital fermentation process that breaks down the gluten in the flour and helps make your bread more digestible.

The yeast cells split and reproduce, generating lactic and carbonic acid, raising the temperature and ultimately adding flavor to the mix.

The longer you leave the yeast to do its thing, the better for your bread. Time is more important than the amount of yeast.

In fact, that's an enduring question — how much yeast? I'll use 20 grams fresh yeast for 500 grams of flour. Others say that's enough yeast for 1 kilo. If you are converting a dry-yeast recipe to fresh yeast, some bakers advise tripling the weight. So, if a sachet of dried yeast is 7 grams, your fresh yeast is 21 grams.

But that also depends on the flours you are using, temperatures in the bowl and the room, and a host of other things. You'll just have to experiment and see. No number of books (and I've read a stack on bread) will help as much as trial and error.

There is one simple fact, though, and that is that more yeast does not make better bread. It might make it rise quicker and higher, but size isn't everything, right?

Oh, mind how and when you add salt. Salt slows the action in yeast. It toughens the gluten "network," or structure of your dough, making it tougher to knead or stretch.

Keep an eye on ambient temperatures as well. Yeast needs warmth to activate and react, but too much heat will kill it — that's basically what happens when you pop your loaf in the oven. You "finish" the process.

So, good bread needs time. If you have a lot of time, why not move it up a notch and grow wild yeast — a sourdough starter — in your own home?

A sourdough starter is not to be mistaken (as it often is) for the leaven, or "mother," "sponge," or levain. That's more a second stage, a descendant of the starter. You take a scoop from your starter and add it to another flour and water mixture when you prepare the dough for a new loaf. 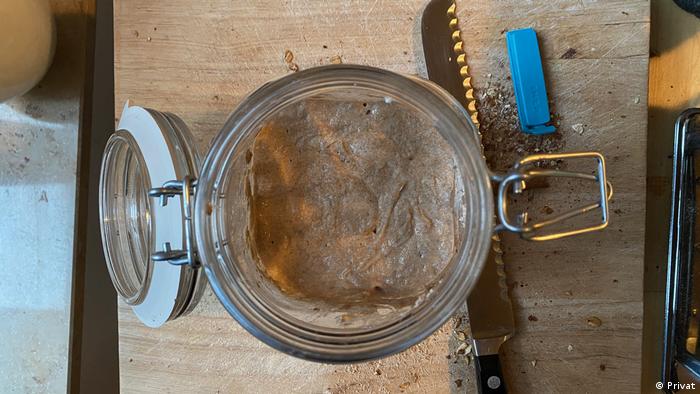 A slow death: the author's rye sourdough starter in much need of love

The sourdough process utilizes yeasts naturally present in flour and … yet more time. A longer fermentation process allows a richer lactic acid bacteria lactobacilli or LAB to evolve, and that can be healthy for your gut microbiome.

It's simple enough to start a sourdough starter. All you need is flour, warm water and time.

Some suggest equal measures of whole-grain flour and water at 28 degrees Celsius (82 degrees Fahrenheit), some say room temperature — just don't let the water exceed 40 C or the yeasts will die. Some suggest two parts flour to three parts water. But it's up to you whether you want a drier or wetter starter. You will know only through experimentation.

Some say you should filter tap water to remove chemicals like fluoride and avoid using water that's boiled and then cooled. Others say that really doesn't matter.

The main thing is, keep it clean and give it time. Days, weeks, months and years.

In the first week, discard half of the mixture each day and add a fresh batch of flour and water. You can use the discarded starter to make patties or a truly dark Russian black bread. But that's for later.

Make sure the starter can breathe — don't screw on a lid, use a cloth to cover it. And after a week, you should start to see bubbles. That's when you know your starter alive and active.

The tricky thing now is keeping it alive and the right amount of active whenever you need some for a loaf. After over a year of cultivating a starter, I still can't get it right. 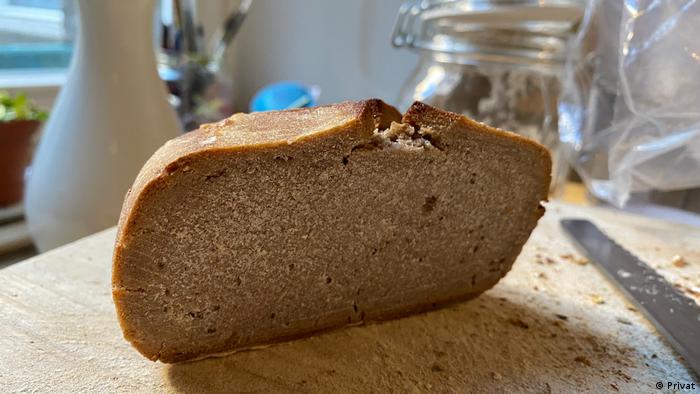 What just happened: one of the author's most recent failed sourdough boules. It's stodgy, clumpy and has no lift

You have to feed your starter regularly with fresh flour and water. If it develops a watery alcohol on top, that's "hooch," a protective layer and just means your starter needs refreshing. If you've only got time to feed it once a week, slow the process by chilling it in a fridge.

Sourdough takes dedication and a scientific approach. You can't knock out a boule.

Yeast aside, it's important to allow time for your flour and water to "autolyze." If you add salt too soon, you will inhibit the gluten structure. Give it time, and two proteins in the wheat, gliadin and glutenin, will bond to give you that all-important gluten (apologies to the gluten-intolerant), the gluten will give the yeast more feed, and you will have an airy, nutritious bread at the end.

But all too often I get impatient and end up having to "juice" my sourdough with a pinch of fresh yeast. It still has that distinctive, sour taste, but it's not "pure." I won't give up. One day I'll make a perfect sourdough rye.