Renewable technology is bringing light into the lives of Kalunga people, descendants of slaves living in remote communities in Brazil. Now, solar powered lamps made from recycled bottles are extending their evenings. 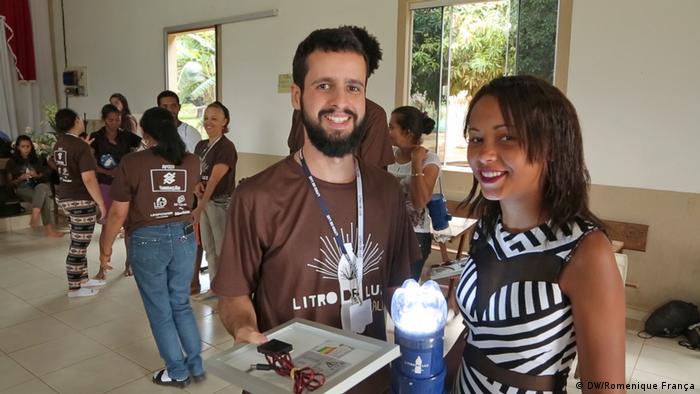 São Domingos' church is the most modern structure in a village otherwise made up of traditional adobe buildings. Its size means it also serves as a kind of community center — and today, as a workshop where locals are busy piecing together a technology to transform life in the village.

Some 50 volunteers from the NGO Litro de Luz have come to teach the villagers how to turn discarded bottles into solar-powered lamps.

"I wanted to get to know completely different realities here in Brazil than the ones we're used to," says Lucas Lima, a 26-year-old engineering student from the south of the country.

Before starting his master's program, Lima wanted to take some time out of education to do something for others. Which is how he ended up here, fiddling with electronic components in a remote village on the Brazilian Cerrado.

São Domingos is only around 350 kilometers from the capital, Brasilia. Yet time seems to have stood still here, deep in the Chapada dos Veadeiros National Park where the Kalunga people have lived for three centuries, accessible only via bumpy gravel track.

Solar power for the Kalunga

Their ancestors were slaves in the surrounding goldmines, and escaped to live in the Brazilian wilderness. The biggest population of slave descendants in the country, the Kalunga shunned the outside world for fear of being recaptured — some communities until as late as the 1980s.

They still live without basic infrastructure. The needs of minority communities are often neglected in Brazil — particularly if they live in remote areas, of which there are many in the world's fifth-largest country.

"We've been virtually forgotten here," says 62-year-old Adir Sousa. "We have no one to help us. We have no roads, no clean water, no high school, no electricity. We have nothing."

Sousa, a member of the Kalunga Association of São Domingos, is trying to improve life in the village. And things are beginning to look up: The community has been formally recognized as a Quilombo, one of the thousands of communities accross the country descended from slaves. 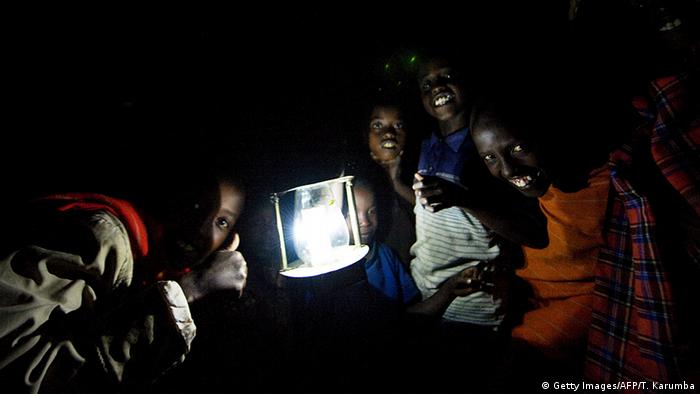 Solar lamps are reaching people living off-grid all over the world, like these children in Kenya

That means they can access state support for farming, building and education. Many hope it will usher in a new era of infrastructure development.

Meanwhile, Sousa has come to the church for a more immediate solution to one of the problems of living so removed from the comforts of modern life.

Like most people here, Sousa is a subsistence farmer and even at his advanced age, he has to work the land each day. When darkness descends, the village falls silent.

"To live without electricity is to suffer," Sousa told DW. "You can't do anything. You have to wait for the next day, until it's light again."

Read more: Living in the dark in rural Nigeria

Like most people here, he uses a kerosene torch to extend the day a little beyond six in the evening. They give off noxious smoke and are a fire hazard. The solar lamps are cleaner, safer and relatively easy to build. 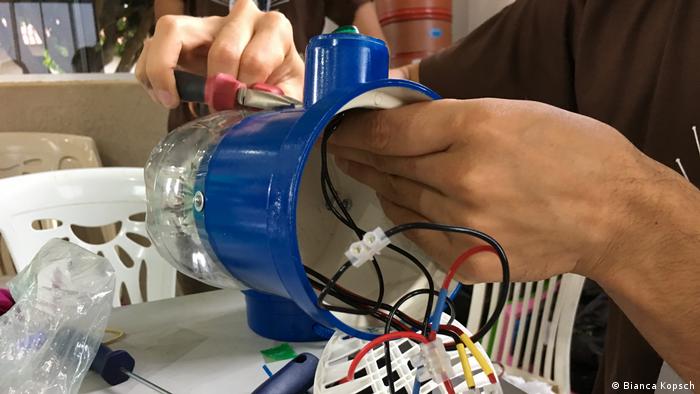 Simple technology, big impact: The lamps can be put together by those who need them

Many of the villagers can't read, so the construction manual uses images without text, and volunteers like Lima are there to help. Lima exchanges a few words with some kids to break the ice, and takes them through the process, step by step.

He helps a girl to first glue the LED panel to the plastic body, which is then screwed onto the upturned base of an old plastic bottle, and finally wired up to the battery, which will be charged by a small solar panel.

As the lamp comes together, the girl overcomes her initial shyness and looks at what they have created with pride. Lima nods, satisfied.

"If you charge the lamp every day, it'll give light for five hours straight and last a good two years," he says. The girl beams.

Across Brazil, around a million people aren't connected to the power grid. Litro de Luz, which was founded in 2014 as an offshoot of the award-winning organization Liter of Light, says more than 10,000 Brazilians now have light thanks to their bottle lamps.

It gets its materials at cost price from the manufacturer, and its work with the Kalunga people was funded with close to 13,000 euros that it won in an international competition held by the state-owned Banco de Brazil.

In São Domingos, the youth are even building solar street lamps and have installed them outside the village's new community center — hoping to get a little nightlife going. 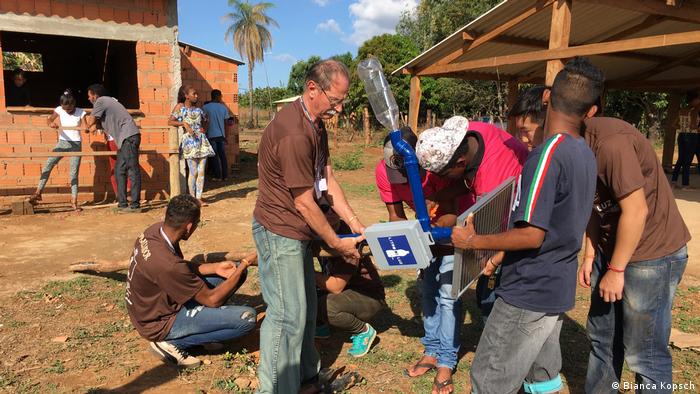 "When we had a party here, we only had a one little lamp," says 16-year-old Daniela da Costa. "We hardly went out at night because it was pitch dark everywhere. That's going to change now."

Read more: When access to electricity is a feminist issue

As dusk closes in on São Domingos, the bottle lamps come on in streets and homes. Behind glowing windows, families enjoy the freedom to study, work, eat and socialize late into the evening.

Rural Georgians look to the sun to ease energy poverty

In the Georgian countryside, many are reliant on firewood for heating. Can local energy cooperatives help fight the resulting air pollution and deforestation, and help families save cash, with a solar-powered fix? (22.05.2018)

Brazil: Bringing light to the Kalunga