So near and yet so far: Yemeni refugees stuck in Djibouti

The war in Yemen triggered a little-reported flood of refugees fleeing across the sea to Djibouti, where they try to recreate a normal life. James Jeffrey reports from a remote camp near the desert town of Obock. 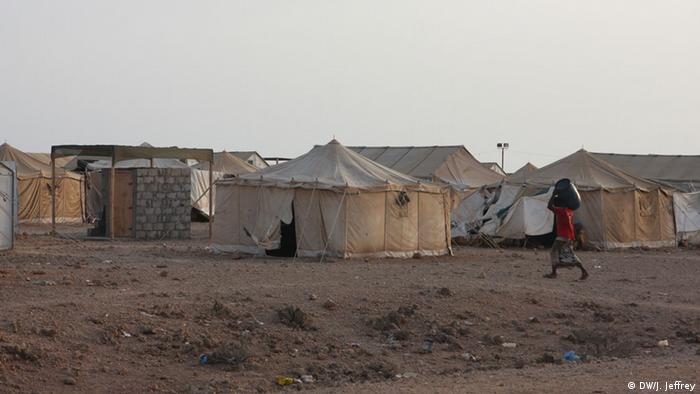 As the sun sets over the refugee camp outside the small town of Obock, Yemeni children giggle among themselves and make various noises as they hesitantly approach and pet a group of camels idling in a sandy lane running between groups of tents. The camels will remain residents of the camp until the end of Ramadan, when they'll be slaughtered for the feast of Eid al-Fitr.

In 2015, the escalation of fighting in Yemen led to a mass exodus, with thousands fleeing to Djibouti across the 30-kilometer (19-mile) stretch of water at the southern entrance to the Red Sea known as Bab-el-Mandeb, the "Gateway of Tears" - a name that refers to the long history of people perishing trying to cross it.

Many settled in a refugee camp that grew outside Obock, an inhospitable sun-parched town in the corner of the Horn of Africa. Facilities in the camp are basic, though they now include a school, started single-handedly by an American missionary, which provides Yemeni children and young adults with education - as well as something more intangible.

"It shows that each individual, each student matters, has a value, a future, and that they're worth investing in as individuals," said Marianne Vecchione, a church volunteer from Los Angeles who has spent the past year in Obock. "It gives families a sense of normalcy back and gives parents a bit of a rest because someone's helping educate their kids, teaching them about right and wrong, and giving them something to do in the desert." 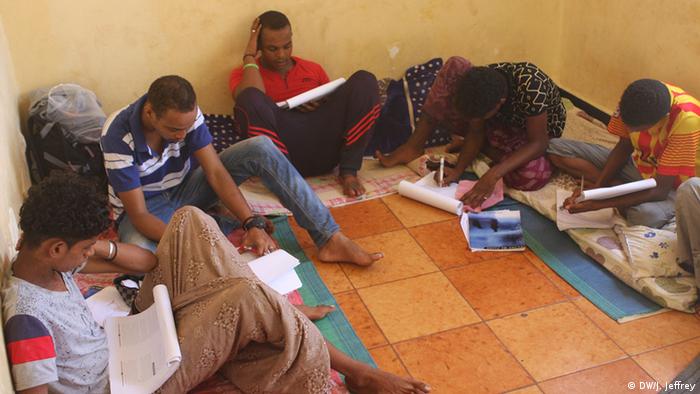 Students studying for their exams in Djibouti City

The sight of the camels provides a rare moment of excitement amid the drudgery of camp life, especially during the testing Ramadan fast, with daily temperatures of about 100 degrees Fahrenheit and more. Housed in these tents are Yemenis from all over the country and from all walks of life: from poor fisherman to affluent professionals.

"Welcome to the Middle Ages," Ali says with a smile as he lifts a cloth that acts as the door to the enclosed area - a small open space with a tent at either end - where Ali lives with his mother and five siblings, two of whom go to the school where Ali volunteers as a teacher. Ali and his family knew a much better life in Sana'a, Yemen's largest city, before his father was killed by a bomb strike and the family fled.

"My future used to be in Yemen when I had a father with an income," said Ali's 18-year-old brother, Issa. "But if we go back we'll be starting from scratch. Before, we depended on ourselves, but how do we do that now?"

The camp housed about 3,000 people at its peak, but now there are just a 1,000, as many refugees have started returning to Yemen.

"There's nothing like home," said one of a group of female refugees discussing what they miss. "Even if you are somewhere better, you can't compare it - where you had your childhood, the traditions, the parks, the mosques and culture. We miss everything, the breath and waves of Yemen. We even miss the shopkeepers, as they were part of daily life." 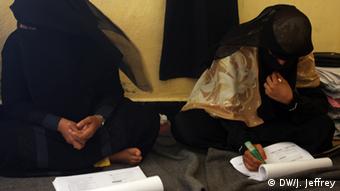 The school gives the refugees a sense of normalcy

One of the women is 44-year-old Dina, who said she had planned to return to Yemen soon but now has doubts after a phone conversation with her son. Having already returned to Yemen to go back to university, he told Dina that there was still heavy fighting there.

Torn apart by a proxy war

"When will there be peace? Maybe in 30 years if the old generation dies and the young are more peaceful and loving," said a 45-year-old Yemeni, a tribal chief back in Yemen who didn't want his name used due to his position. "The rebels came from nothing and took over everything, killing a lot. They had to have someone behind them - big support to get all the weapons."

Yemen has fallen foul of a proxy war between Saudi Arabia, supporting Yemen's government forces, and Iran, backing the Houthi rebels, who according to Yemenis in the camp, have committed the most and worst atrocities.

Vecchione recounts how one day she told young school children to draw pictures for a class and by its end she found herself looking at scrawled pictures of bombed-out houses, dead people and boats being shelled. When some refugees fled across the Bab-el-Mandeb, unknown troops on the Yemeni mainland fired artillery at their boats.

Many refugees are deeply traumatized, something the aid world can forget in its haste to deliver assistance, according to Vecchione.

"In the aid world things are done according to projects and programs; they're not done according to individuals, so the aid world can forget you're dealing with someone who is traumatized and who needs special care, and needs a different way of handling," Vecchione said. "It dehumanizes them in way, and I think what we do as a church is we can see the person and treat them as individuals, not as a group. It's not about a project budget; it's about the person." 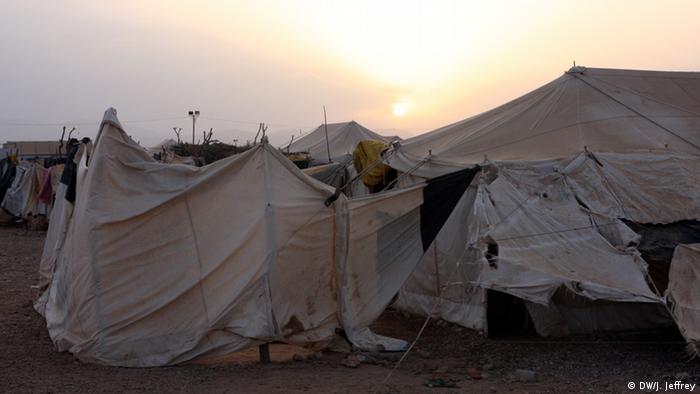 Refuge, of sorts, in Djibouti

Djibouti's government has come in for criticism for not doing enough to help the impoverished in the country. But Vecchione notes that the Ministry of Education helped her when she took two groups of students to Djibouti City to complete their exams.

"The government is showing the way internationally [with refugees]," said Tom Kelly, US ambassador to Djibouti, who has visited the camp several times and hosted the students at his residence while they took exams in the city. "They've saved thousands of lives. It deserves credit for opening its borders to people who had nowhere else to go."

The influx of Yemeni refugees into Djibouti has totaled about 35,000, Kelly said, which, relative to the size of Djibouti's population, would be like 13 million people entering the US.

Having completed their exams, the students returned to Obock and the camp's long torpid days with little to do, though plenty of time to reflect.

But talking about what has happened is still a challenge for many. Twenty-year-old Gada, one of the female students who took her exams in the city, could only dab with a piece of tissue at her eyes between the slit of her black niqab. It's obvious she can't find words to answer the question: How bad was it in Yemen before you left?

"The school also breaks down some of the regional challenges people have based on the war, as there's a lot of north-south and inter-city squabbling based on the fighting and trauma," Vecchione said. "Different cities committed different atrocities, but the school brought [children and parents] together, and unified them as one people."

After meeting with the Prime Minister in Athens, UN chief Ban Ki-moon has praised Greece's 'solidarity and compassion' towards refugees. He called for international support. (18.06.2016)