Communities have been cut off, travel disrupted and more avalanches set off as a fresh wave of wintry weather hit southern Germany and Austria. The weight of the snow is a major danger.

Germany, Austria and Switzerland have been hit by deadly winter storms over the last week. Meteorologists have dubbed the extreme weather phenomenon "snow chaos," warning that more is yet to come.

The weight of the snow on buildings, trees and power lines has been a major challenge for local authorities, police and army personnel brought in to help.

Some areas remain cut off: 17,000 people were reported to be stranded in the Salzburg region alone.

While the snow was forecast to ease overnight to Tuesday, more falls are expected on Thursday, with more snow at lower altitudes as well as in the mountains.

The risk of flooding in lower-lying regions of Germany is also increasing as rivers and streams rise over their banks. 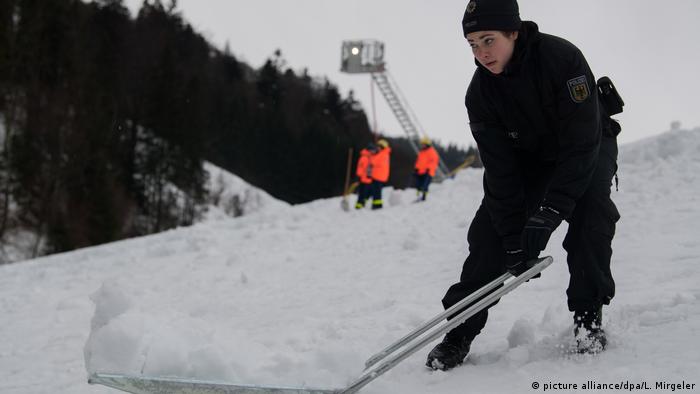 Here are the winter-weather related events during Monday:

17:49 By Monday evening, the German Weather Service said the snowfall looked set to ease, and would gradually subside on Tuesday evening.

16:19 In Austria, a 47-year-old man who had been clearing snow from the roof of a house near Salzburg was killed by an avalanche. He and three other men were carried away by the masses of snow.

14:16  The German Weather Service (DWD) said up to one and a half meters of fresh snow were expected in exposed Alpine congested areas until Tuesday evening, and up to 70 centimeters in the Alpine foothills.

13:38 German Interior Minister Horst Seehofer said more than 200 police offers have been dispatched to help out with emergency efforts in Bavaria.

12:57 A bus operated by the budget travel company Flixbus flipped on its side in Austria. At least 13 people were injured in the accident. 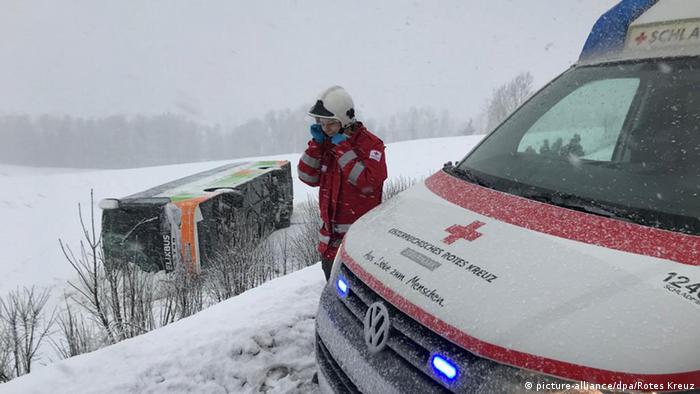 12:23 The Bavarian hunting association warned that the masses of snow pose a life-threatening situation for animals in the area. The association wants to use helicopters to drop hay bales for the animals. "Extreme situations call for extreme measures," said spokesman Thomas Schreder.

11:47 #ICYMI Last week, the Bundeswehr had to deliver supplies to the Alpine town of Berchtesgaden. Here's a photo from the operation: 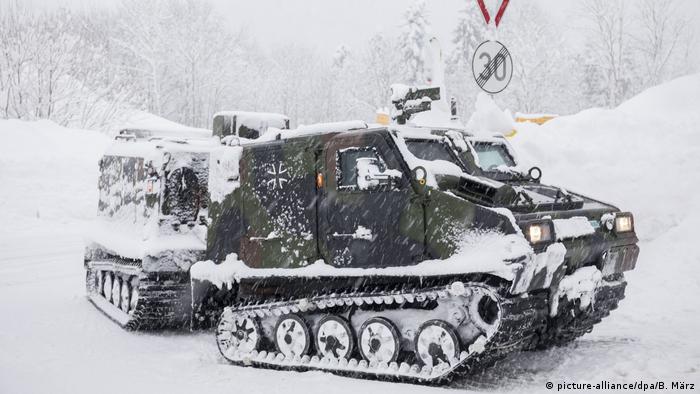 11:39 Don't know where to start with all the coverage of the deadly winter storms? Here's a wrap-up of the heavy snowfall that has wreaked havoc across Germany, Austria and other parts of central Europe.

The Day with Phil Gayle: Central Europe snowed in

11:33 Several schools have been closed in Bavaria due to heavy snow. It is the second week of cancellations.

11:13 Extreme weather: global warming or exaggeration? Let us know what you think in our poll.

11:09 German Interior Minister Horst Seehofer visited the fire department of Berchtesgaden, an Alpine town that was cut off by massive amounts of snow. Last week, the Bundeswehr delivered much-needed supplies to the snow-covered town.

10:42 Police in Bavaria have warned that more rain and snow forecast in the coming days could give rise to dangerous flood waters. In some parts, the water has already started to rise. 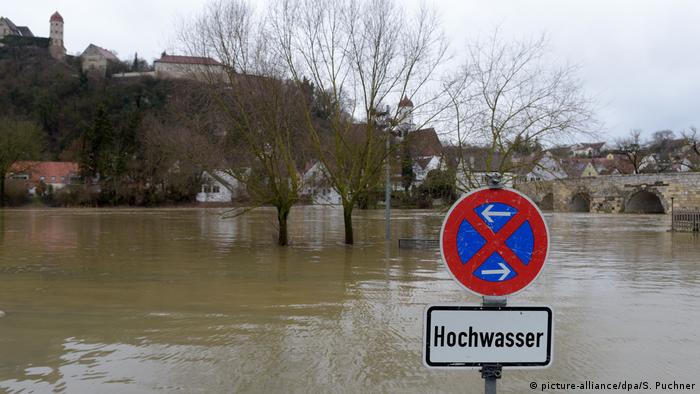 10:34 In Austria, uncertainty about weather conditions has made it difficult for many to go to work. For those working on the slopes, it's even nearly impossible, according to DW correspondent Amien Essif.

10:27 A large avalanche slammed into a hotel in Bavaria, prompting an evacuation of more than 100 of its occupants. The hotel owner described "massive damage" to at least four buildings. 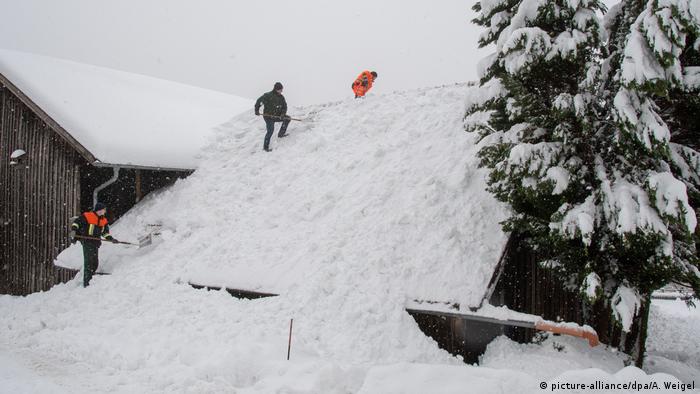 The snow is piling up. Authorities warned that more snow in the comings days could collapse roofs.

10:00 Welcome to DW's rolling coverage of devastating snow storms battering southern Germany, Austria and Switzerland. Over the past few days, several people have been killed by avalanches, including three Germans over the weekend. Authorities have warned that there is more snow forecast in the coming days, which could create more dangerous conditions in the area.

Snowfall has created chaos in Bavaria and neighboring areas with no sign of letting up. From falling tree warnings to major transport disruption, DW takes a look at the extreme weather phenomenon crippling the south. (12.01.2019)