Russian media's portrayal of Sergei Skripal's poisoning follows an official line: The Kremlin is innocent; contrary reports are part of an anti-Russia conspiracy. The latest revelations from the UK only reinforce this. 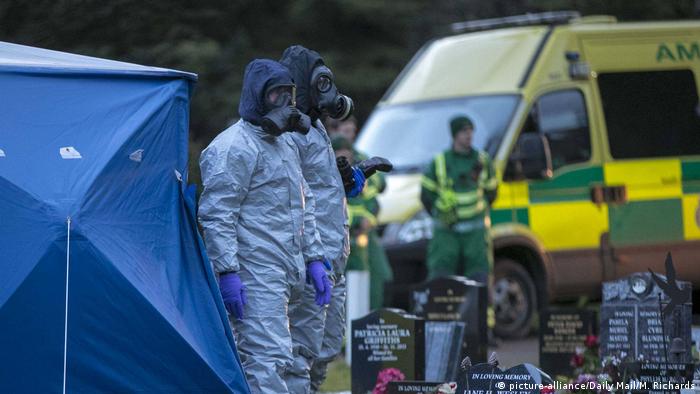 Russian officials and their allies in the media were quick to comment on the UK's admission that the Novichok nerve agent used in the attack on former spy Sergei Skripal cannot be traced back to any specific country. Pro-government Russians have taken it as yet another piece of evidence that the affair is part of a campaign to harm their country's international image.

"This situation has been completely monstrous from the beginning," he told reporters, claiming that the accusations had been "mindless" and unfounded.

"This is just a fancy way to confirm it," he said, "and it's completely official and completely expert-made."

Putin also commented on the Skripal affair while giving a joint press conference with Turkish President Recep Tayyip Erdogan in Ankara. In the light of the Aitkenhead interview, Putin said, "it is surprising, first of all, that the anti-Russian campaign was mounted with such speed."

Scientists have not ‘verified’ poison source

The narrative was also echoed by the mass-circulation Komsomolskaya Pravda,which slammed the "anti-Kremlin campaign."

"This whole time, London and Washington were speaking with one voice about the 'practically proven guilt of Russia' and some even demanded a boycott of the upcoming football world cup in Russia," an editorial read. "And now, something doesn't fit: Yesterday, British biochemists said they did not find Russian traces in the 'Skripal poison.' It's interesting. If it turns out that Moscow had nothing to do about the 'chemical attack in Salisbury' will our 'Western partners' apologize for their shameless hysteria? Or will they pull something else out of thin air and start the whole show again?"

The pro-government Vesti.ru website linked the timing of the UK scientist's disclosure to Wednesday's emergency summit called by the Organisation for the Prohibition of Chemical Weapons.

"It's worth noting that the revelations of the head of the secret laboratory appeared a day ahead of the key Hague meeting where a committee of the Organisation for the Prohibition of Chemical Weapons is set to convene on Russia's request to objectively look into the Salisbury event. This can hardly be considered an accident," the website charged. "Aitkenhead has already given interviews to British journalists last week but did not breathe a world about the lab not being able to detect the source of the neuroparalytic substance that was allegedly used to poison Skripal and his daughter. Instead of real facts, the press were publishing various versions of events involving poisonous doors, floral arrangements and even poisonous porridge."

Well-known for her blunt style of communication, Russian Foreign Ministry spokeswoman Maria Zakharova commented on the UK's position in a Facebook post.

"What are they going to say next? They are going to keep on lying, dodging, shifting responsibility among themselves. Why? Because this is not the first time they are doing it," she said, promising new revelations in the upcoming official briefing.

The dissident-leaning Novaya Gazeta decried the government's response to the crisis and urged more cooperation.

"If it wasn't a Russian operative, then all the power of Russian intelligence, counterintelligence, secret and top secret agencies should be committed to finding out whose hands got on this substance and deliver this person to an international court," the newspaper recommended. "This really is a matter of honor for the country. Propaganda and counterpropaganda will not save it."

Decision-makers abroad are "confident that this is no accident, no exception and no aberration," as the newspaper put it. "They think this is our mentality. Now that is the true catastrophe."

Boris Johnson: 'No attempt to take innocent life on UK soil will go either unsanctioned or unpunished'