Hong Kong voters have sent a clear message to the establishment. District councilors may have very little political power, but DW's Frank Sieren says it would be wrong to ignore the results and continue as before. 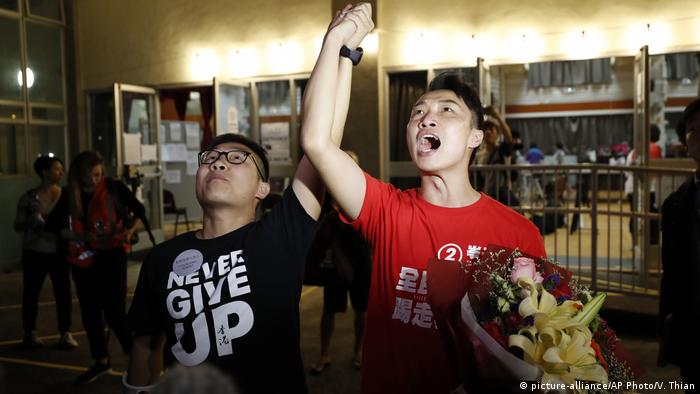 Even if the situation has been overshadowed by the terrible news of the abuses of Uighurs and other Muslims in the Xinjiang region, the developments in Hong Kong last weekend are of fundamental significance for China.

Never before have so many people taken part in Hong Kong's local elections: 71% of the electorate, almost 3 million people, went to the polls on Sunday. The result was a landslide victory for the pro-democracy camp, which now controls 90% of the district councils.

Never before had the Chinese voted so clearly against Beijing in free elections. Many pro-Beijing hard-liners, such as controversial lawmaker Junius Ho, lost their seats. State media had predicted that the elections would be seen as a referendum, but had predicted that the "silent majority" would opt for "security and order" and vote in favor of the pro-Beijing camp. Clearly, they were mistaken.

Pro-democracy voters also want security and order — but even more than that, they want autonomy. They want Beijing to have less influence in their city, they want an independent inquiry into police violence and—most importantly — they want to be able to freely choose their government.

Chief Executive Carrie Lam, who has obstinately refused to make any compromise or introduce reforms, was effectively voted out. But her refusal to step down despite the debacle, and Beijing's continued support of her leadership, show the limitations of democracy in Hong Kong.

Though Lam immediately pledged after the vote that she would listen "humbly" and reflect "seriously" on the results, in her next public appearance she was adamant that she would not give in to the demands of the pro-democracy protesters. Instead, she announced plans for a committee to evaluate Hong Kong's deep-rooted social problems, without giving further details. Clearly, her response was lacking.

For many, Lam is once again using typical rhetoric and delay tactics, which will only serve to escalate the situation. She seems to be hoping the election results represent only a symbolic victory for the pro-democracy protesters. In part, she's right — the newly-elected district councilors have very little room to maneuver. They can't pass laws or make important decisions; instead, they hold more of an advisory role on everyday issues like recycling or health care.

But this belief is another mistake on Lam's part. Pro-democracy forces are already working toward their next goal: the parliamentary election next autumn. If the results are similar, they'll have a good chance of forcing through reforms involving the police, election rules and democracy. But first, they'll have a lot of work to do to lay the groundwork. Many of the new district councilors are young and lack experience. In 2003, the pro-democracy camp made similar advances after anti-establishment protests, but came to a standstill when faced with the daily political grind.

China's state media have glossed over Sunday's results, and at times ignored them completely. Newspapers China Daily and Global Times concentrated on the candidates' alleged disabilities and spoke of nebulous infiltration by "foreign forces." Chinese Foreign Minister Wang Yi stressed that Hong Kong was a part of China "no matter what happens." He was sending a clear message: the results would not force Beijing or Carrie Lam into anything, and autonomy ends where Beijing's interests begin.

However, there is still a path that Lam — or preferably, her successor — can take: she must immediately introduce reforms and respond to the concerns of the people of Hong Kong.

Although much seems possible, it remains nearly certain that Beijing will not allow a free election of the city's parliament, even if this would be a very valuable and sensible experiment on a comparatively small territory. It would allow for the "one country, two systems" principle to be expanded, and yet it wouldn't mean Hong Kong was splitting off from the People's Republic. This remains a deeply-rooted fear in Beijing, after China's disintegration in the first half of the 20th century.

Autonomy also has its limitations. This is the case in Western democracies too, as the case of Catalonia shows. Whereas an absolute majority in Catalonia voted for independence in 2017, the Spanish constitutional court ruled that the vote had been anti-constitutional, citing the "indissoluble unity of the Spanish Nation" that is anchored in the constitution.

This would be the case in Germany, though there are no strong independence movements there. Parties that call for Bavarian independence, for example, are considered anti-constitutional. In 2017, the German Federal Constitutional Court ruled there was "no room under the constitution for individual states to attempt to secede."

Time to swallow their pride

Beijing could take the risk of conducting the "one country, two systems" experiment for ever. This would not damage its sovereignty, but actually reinforce it. Unfortunately, for the government to have the courage and the openness to do so remains inconceivable.

Now that the pro-democracy camp has received this boost at the polls, protesters should also swallow their pride and sit down at the negotiating table. An armistice would be an important step for Beijing. Democracy and autonomy are not about putting across interests using endless violence, but about finding compromises in dialogue.

Time is of the essence, and it's playing against the protesters at the moment. The more painful the economic impact of the protests, the more people will ask themselves whether they are ready to put their lives and children on the line for the pro-democracy movement. For many, the price will be too high.

Sieren's China: In Hong Kong, it's time for compromise

Beijing is not doing itself any favors with its current tactics dealing with protesters in Hong Kong. Frank Sieren thinks the concerns of the protesters should be addressed and resolved. (30.08.2019)

Brazil: WHO condemns attacks on monkeys over pox fears 56m ago

US: Suspect arrested over murders of four Muslim men in New Mexico 3h ago

US: Biden signs off on semiconductor bill in challenge to China 7h ago