A well-known and controversial imam and one other person were wounded in the attack on the Sunna mosque in Brest on the French Atlantic Coast. The gunman was later found dead. 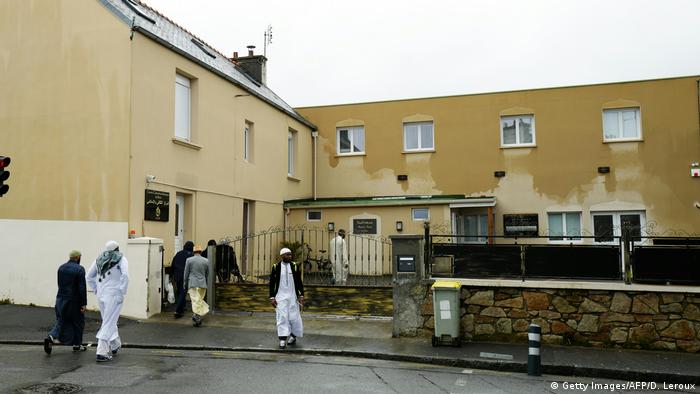 The Sunna Mosque in Brest

Several shots were heard in front of the Sunna mosque in Brest on Thursday afternoon and two people, including the imam Rachid Eljay, were injured.

Both of the injured men were taken to the hospital and were later said to be "doing OK," according to police.

After firing at the two men, the gunman fled the scene in a Renault Clio car that was found by police in a nearby neighborhood shortly afterward. The body of the assailant was found with a gunshot wound to the head close to the vehicle.

The police search was then called off as investigators believe the assailant acted alone.

According to the local newspaper Le Telegramme, the suspect claimed responsibility for the attack on Facebook. The targeted imam has a large following on the site.

An imam's change of name

Eljay was previously known under the name of Rachid Abou Houdeyfa and made a series of controversial statements and online videos.

He first came to prominence in 2015 while France was confronting a series of terror attacks. The imam's strong, Salafist-inspired statements dated to 2012 and in one video he was seen telling children who liked listening to music that "Allah would change them into pigs or monkeys." His YouTube channel at the time had 68,000 followers.

In April 2016, then-President Francois Hollande said on television that the Brest mosque had been closed and Imam Rachid Abu Houdeyfa was being prosecuted. However, this was later found to be inaccurate. On Facebook, the imam responded to Hollande's accusations saying: "The imam of Brest has never committed any criminal offense, he has never broken any law, or been indicted because of his speeches — unlike many other people." He has reportedly received death threats from the "Islamic State" group.

While the mosque and the imam's home had been raided, no legal proceedings ensued and the imam has continued his activities and as of Thursday had over a million likes on his Facebook page.

Dresden prosecutors say a Bosnian man linked to the 2015 attacks on the Bataclan nightclub in Paris is under arrest in Germany's Saxony-Anhalt state. An extradition to Belgium is being considered. (27.06.2019)