Sexual violence in Pakistan: How female police officers are helping victims | Asia | An in-depth look at news from across the continent | DW | 08.02.2021

Many rape and domestic violence victims in Pakistan prefer to not report to authorities because of the male-dominated police staff. Some female officers are now taking measures to encourage them to come forward. 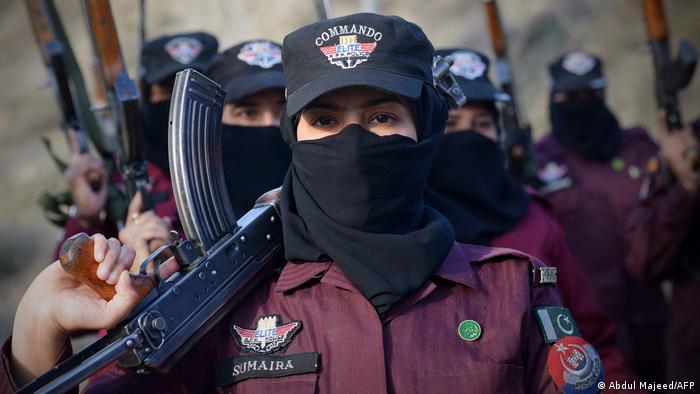 Gender balance in the police force is still a distant dream

Violence against women is rampant in Pakistan, with several rape cases over the past year making national headlines and causing an uproar in the Muslim-majority South Asian country.

But activists say the recorded cases are only the tip of the iceberg, as most cases of gender-based violence go unreported in the country. In many instances, women do not come forward and report the abuse to authorities.

One of the reasons behind this is a sense of fear. As much of Pakistan's police force and judiciary is male-dominated, women are reluctant to interact with them. There have been reports of harassment in police stations during investigation.

Human rights groups are urging the government to pass a new law to establish special courts for rape trials, so that victims of sexual abuse and gender-based violence feel more secure. They also demand that the number of female police officers and female judges be increased to deal with such cases.

Women make up only 1.8% of the country's police force. In the past few years, there has been a modest increase, but gender balance in the police is still a distant dream.

"We don't have many women officers in police stations, but our senior officers go through a rigorous training. At the same time, we need to empower young policewomen, who, I think, are very capable," Muhammad Ahsan Younas, a deputy inspector general (DIG) for the Rawalpindi city police, told DW.

Younas has launched several projects that are led by policewomen. For instance, to encourage women to report cases of harassment and violence, the police station has established a separate unit to deal with complaints.

He has also set up a helpline that is operated only by female police officers. Women in Rawalpindi and surrounding areas can call the toll-free 111-276-797 number to report domestic abuse or harassment without having to go to the police station. After the complaint is lodged through the helpline, a female police officer makes an appointment with the complainant.

Amna Baig, a 29-year-old female police official and one of the main figures behind the helpline, says it is a difficult task for women to report harassment. "Most of the times it is not even an option for them because of the social stigma. Women going to the police station is considered a taboo in Pakistan. Our helpline ensures anonymity and safety," Baig told DW.

The helpline was launched on December 8, and as per statistics provided by Rawalpindi's women police station, scores of women called the helpline in December, and police registered 25 formal complaints as a result of it.

According to police, complaints about teasing in public spaces accounted for 52% of calls, 12% were about sexual harassment and around 36% about domestic violence.

Baig notes that while the helpline is encouraging more women to lodge a complaint, formal police reports are still rare, as women often succumb to family and social pressures to forgive the culprits, especially when they are family members.

Baig is hopeful that more women will join the police force in the coming years. "I come from a common Pakistani household. If a female family member has an issue that involves police, a male member takes it up for her," she said.

"Pakistani women can easily go to a hospital or a school because there are many women working there. I wanted to join the police force so that women can access police services without fear," she said.

Baig has over 80,000 followers on Twitter. She is tech-savvy and represents a change in the Pakistani police force.

But it was more difficult for women to join the police in the past. Shahida Yasmeen, a station house officer (SHO), has been a police officer for the past three decades.

"When I joined the force, a female police officer was pretty much unheard-of. I am happy to see that it is not the case anymore," Yasmeen told DW.

"We were often harassed by our male colleagues, and we could do nothing about it. Now, male police officers are more respectful, and gender-sensitized," she added.

Yasmeen is planning to start a career counseling service to encourage young women to join the police force.