Several dead after military helicopter is shot down in Ukraine

Several people have been killed after a helicopter was shot down in eastern Ukraine. It's reported pro-Russia separatists carried out a repeat of an attack on a military helicopter in the same region last month. 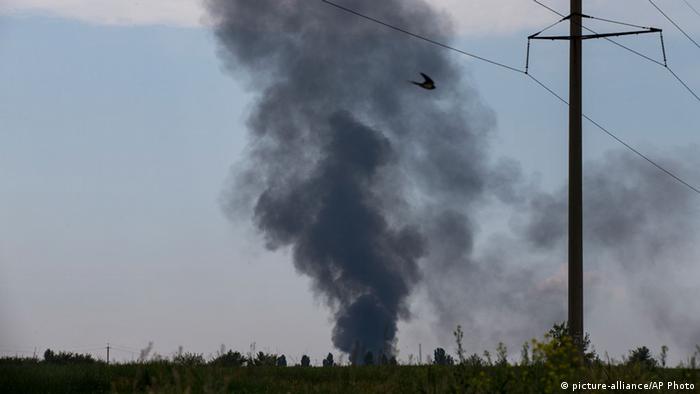 It was the second time in recent weeks that a military helicopter was attacked by pro-Russia separatists in the Slovyansk area. Fourteen servicemen were killed on May 29, (pictured above), including a general.

A Ukrainian military spokesman said that all nine people on board the helicopter in Tuesday's attack had also died.

The helicopter was carrying technicians who had been installing equipment to monitor violations of a peace plan in eastern Ukraine.

The crew were on their return journey when the Mi-8 cargo helicopter they were travelling in was struck by a missile near Slovyansk, government forces spokesman Vladislav Seleznyov confirmed.

"There were 9 people on board. According to preliminary information... all those on board were killed," Seleznyov said on his Facebook page.

The incident happened just hours after pro-Russia separatists on Monday night announced a ceasefire until June 27.

The move was in line with a week-long truce by government forces ordered by Ukraine's President Petro Poroshenko.

Ukraine's President Petro Poroshenko was trying to secure national and international support for his peace plan to end two and a half months of fighting in the country's east.

The plan would offer a safety "corridor" back to Russia for pro-Kremlin fighters who lay down their arms.

The proposal secured the backing of Western governments and qualified support from Russian President Vladimir Putin.

During a visit to Vienna on Tuesday, however, Putin dismissed the ceasefire as "too short."

"We hope that this ceasefire will be extended, and that it will be used for substantial negotiations," he said, as he called for further serious talks between Kyiv and representatives from eastern Ukraine.

Making it clear that Russia will always protect the interests of Ukraine's ethnic Russians, Putin said, "I hope that armed forces will not be necessary for this."

Putin also asked Russian lawmakers to revoke a resolution allowing him to invade Ukraine in a shock change of heart that Kyiv hailed as the "first practical step" in defusing the months-long crisis.

Fighting in eastern Ukraine has claimed the lives of around 390 civilians and fighters on both sides.