Serious tensions in German-Russian relations | Europe| News and current affairs from around the continent | DW | 29.04.2014

For many years, relations between Germany and Russia were seen as particularly close. But the Ukraine crisis has put a severe strain on that friendship, and Germany risks losing its special relationship with Russia. 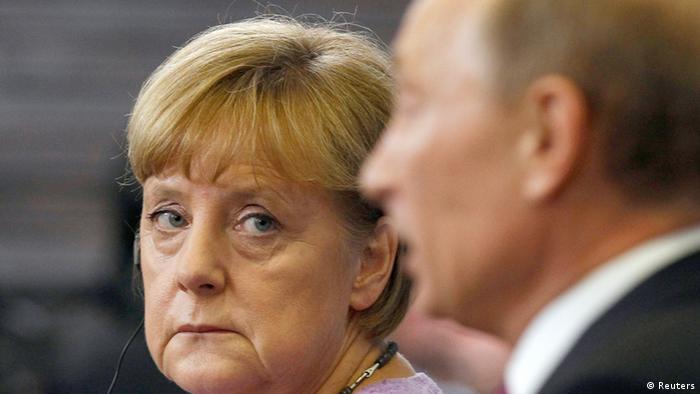 Two good friends greeted each other with a hearty embrace at a reception given in Saint Petersburg by the Russian gas pipeline company Nord Stream. Their names: Vladimir Putin, Russian president, and Gerhard Schröder, former German chancellor. The party was being given on Monday evening (28.04.2014) in Schröder's honor to mark his 70th birthday. He's chair of the shareholders' committee of Nord Stream, which is mainly owned by the Russian energy giant Gazprom and which operates a gas pipeline through the Baltic Sea from Russia to Germany.

From the warmth of the embrace, one would think that there were no shadows on the relations between Germany and Russia. Even if Schröder is no longer involved actively in politics, his Social Democratic party is part of the government. One of his closest political allies, Frank-Walter Steinmeier, is foreign minister - and the Ukraine crisis has changed German-Russian relations for the worse.

Pale shadow of a partnership 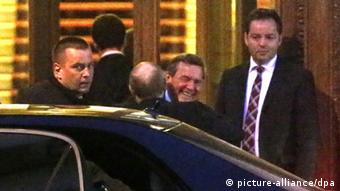 Once, Germany was seen as Russia's most important partner in the West. "Germany was Russia's privileged contact within NATO and the EU, says Hans-Joachim Spanger of the Hessian Foundation for Peace and Conflict Research. "That gave Germany a somewhat more prominent position."

But now, with a "newly activated Cold War," Spanger sees a need "for solidarity within the alliance and not for a special relationship." Germany's allies mistrust any such privilege.

"The German foreign minister is making a lot of effort to maintain a moderate tone in the very shrill exchange, so that channels of communication and bridges of understanding can be maintained," says Spanger. "That's all that's left of the German special relationship."

But Alexander Dynkin, director of the Institute for the Global Economy and International Relations at the Russian Academy of Sciences, is critical of Germany's role: "Germany has not exactly demonstrated its leading role in settling this crisis," he says. Normal people in Russia don't allot any privileged role to Germany compared with the rest of the West. Experts might see it a bit differently, but Dynkin says he does not see any "European activity that is independent from Washington."

The German government coordinator for Russian affairs, Gernot Erler, said on Tuesday that he would like to see a new round of Geneva talks with Russia: "There's plenty to talk about: why haven't the commitments which were made then been implemented?"

Dynkin agrees that such talks are right in principle, but says the Geneva talks failed to develop mechanisms to ensure implementation: "Signing pretty documents without having the instruments to impose them only highlights failures." 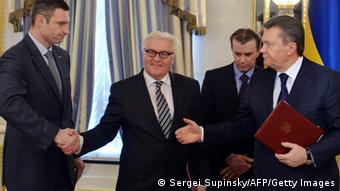 Dynkin remembers that Steinmeier had signed an agreement in Kyiv on February 21 "that landed in the trash not 24 hours later." That was when the foreign ministers of Germany, France and Poland got the opposition to agree with then-President Viktor Yanukovych on the way forward. Shortly afterwards, Yanukovych was overthrown.

Both Spanger and Dynkin agree that Germany and Russia remain closely tied on an economic level.

"German business is fighting a fairly dogged battle against the third round of sanctions," says Spanger, "Since industry leaders rightly fear that this would close the Russian market." And Dynkin adds, "The Chinese economy would profit most from such sanctions."

He wants to see more cooperation between Russian and the Europeans - claiming the crisis in Ukraine can only be solved by them working together. But he adds that the influence of Russia on the East of the country is much less than is often made out, and it's certainly less than the influence of the West in Kyiv.

However, a mutually trustworthy partnership also needs good personal relations between those involved: "Specifically with regard to relations with Russia, personal contacts play an unusually important role at all levels," Spanger points out, "Much more important that institutional relations."

Meanwhile, the tone between Putin and the German chancellor, Angela Merkel, seem to be cool. Dynkin says, "Unfortunately, I don't see any good chemistry in their bilateral relations."

The German government wants to see the OSCE observers set free, and Russia has even pledged support to make this happen. But Berlin wants to avoid an attempt by Ukrainian forces to free the hostages by force. (29.04.2014)

Krichbaum: 'Russia needs to extinguish the fire in Ukraine'

The Ukrainian crisis summit in Geneva has produced a peace plan. Gunther Krichbaum, chairman of the European Affairs Committee of the German Bundestag, welcomes the agreement, but doesn’t view it as a breakthrough. (18.04.2014)