Serie A club Atalanta: Returning to play in a coronavirus hotspot

Italy's Serie A is among the leagues to have restarted during the coronavirus pandemic. This includes Atalanta, whose Champions League match is widely thought to have been a major driver of the outbreak in Bergamo. 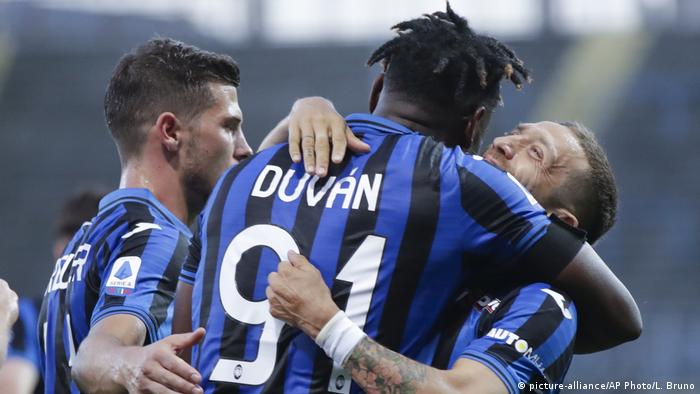 The square in front of the Gewiss Stadium in Bergamo is deserted. About 150 ultras from the Curva Nord gather in front of a nearby bar, their usual meeting place before a match. They have brought banners with them – not to celebrate their beloved Atalanta but to condemn the restart of Serie A as a "disgrace."

"Shame, shame" the ultras chant in front of the main entrance to the stadium as their side score the first of four goals on this Sunday. "Football without fans is no football" is written on another banner hanging from a fence outside the stadium.

Meanwhile, the sports daily Gazzetta dello Sport celebrates the "Atalanta goal machine" after their 4-1 victory over Sassuolo – as if the match itself was the main event. However, the very restart of football in Bergamo is a much bigger story than what happened on the pitch. One hundred and three days have passed since Atalanta's 4-3 win over Valencia in the Champions League – a match that is broadly accepted to have accelerated the spread of the coronavirus, turning Bergamo into a hotspot of this pandemic.

Who could forget the images of Italian army trucks transporting hundreds of coffins out of the city because the cemeteries there were overwhelmed? Almost 6,000 people died in Bergamo in March alone.

"We have all lost someone, friends, acquaintances, relatives," said Sara Mazzoleni, who runs the kiosk right next to the stadium where the ultras regularly meet and from where they set off for Sunday's protest.

"There are all kinds of tests for the professional footballers. But they are in short supply in the hospitals," she told DW. "There is not even enough for all the nurses. And these are the people who help you in an emergency."

Mazzoleni and many of her customers see the restart of Serie A as a sign of a lack of respect for the dead. Unsurprisingly, people in football see things differently.

"What has happened can never be undone. It has completely changed our lives. Through football we want to bring a smile to faces in a city that has been so damaged," said Atalanta coach Gian Piero Gasperini, who was himself infected with the virus.

The fact that he was apparently already infected when he traveled to Valencia for the return leg of the Champions League round-of-16 tie caused anger in Spain, but he denies any responsibility.

"I know that I followed all the protocols. I didn't do a swab test at that time. And it wasn't until May, when we did the antibody tests, that I discovered I had the virus."

His case shows how careless the response to the virus was at the beginning of the pandemic in Italy and that testing began far too late.

Review of the game zero

The fans didn't take the virus seriously back then either. Some 45,000 Atalanta supporters traveled to the San Siro in Milan for their first-leg match against Valencia on February 19.

"Back then, the virus was a Chinese problem. We were thrilled to go to the game as Atalanta were new to the Champions League," Alessandro Pezzotta, president of an Atalanta fan club, told DW. "We didn't know what our team might be capable of. But then we scored a goal, then a second, a third and a fourth. We shed tears of joy. It was something we would be able to tell our children about."

Now Pezzotta can tell his children that he was at "Game Zero," which many experts regard as a driver of the pandemic in Italy. Pezzotta himself was not infected, nor does he know of anyone whose infection can be traced back to that game. Nevertheless, he has lost friends, including some fans and two who worked as stewards. Pezzotta is a steward himself, one of about 20 allowed into the stadium this Sunday, a tenth of the normal number.

"We're not concerned with security now, but we're here for the journalists and cameramen," he said. He had to fill out a form declaring that he wasn't suffering from Covid-19 before entering the stadium. He arrived wearing a mask and his temperature was taken. The players arrived by bus, after spending the previous night at the Zingonia training center. But after the final whistle, some of them were picked up by family members and brought home. The day before the game, central defender Jose Palomino was even seen strolling through downtown Bergamo.

The quarantine rules have in fact been relaxed. Until a few days ago, the rule was that if a positive case occurred, the whole team would have to go into quarantine. Now, the rest of the team can continue to train and play as long as they test negative for COVID-19. The rules were relaxed due to a sharp drop in the number of new confirmed cases. There were only 31 new cases reported in Bergamo on Saturday – compared to about 300 positive tests per day in mid-March.

Back then, a lot of fans tried to do their part to help contain the pandemic.

"Many fan clubs produced masks. One club even cut up the old banners for the stadium choreographies. The money was donated to hospitals and charitable organizations," Pezzotta said.

Some ultras from Curva Nord also worked on the construction of the temporary hospital at the Bergamo exhibition center. The hospital was built entirely by volunteers and was largely paid for through donations.

At the moment, though, football is not the uniting force it once was in Bergamo. Many of the few who were allowed to enter the stadium appeared disillusioned when they left. Atalanta, it seems, is no longer the affair of the heart it was for many before the crisis. By the middle of the second half, the ultras had already left their bar – without even having tuned in to the match on TV.

Bundesliga set to kick off play

Bundesliga set to kick off play in empty stadiums

With games in the penultimate matchday of the Bundesliga season all played at the same time, there was room for plenty of drama. A trio of teams celebrated avoiding relegation, while one still needs a special final day. (20.06.2020)

Tennis player Grigor Dimitrov has tested positive for COVID-19, which has led to the cancellation of a tournament in Croatia. Meanwhile, France has given the green light for fans to return to stadiums. (21.06.2020)