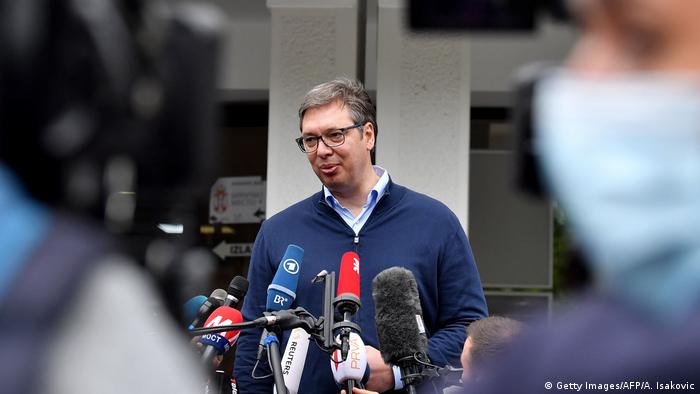 Serbia's ruling Progressive Party (SNS) has won a landslide victory in Europe's first national election since the coronavirus crisis began, according to projections on Sunday evening.

"I am grateful to the people for this historic support," President Aleksander Vucic, who leads the SNS party, said in a victory speech. "We received a huge vote of confidence, which is also a call for us to do even better."

A sample of polling stations by pollsters Ipsos and CeSID put Vucic's SNS firmly in the lead with 63.4% of the vote, the Socialist Party — junior partners in the governing coalition — in second place with 10.3%, and the center-right Serbian Patriotic Alliance in third place with 3.9%.

Exit polls are not allowed in Serbia.

Some 6.5 million people were eligible to cast ballots for the Balkan country's 250-member parliament. But turnout was lower than in previous years, likely due in part to fears of COVID-19 infection.Pollsters put turnout at 48%, compared to 56.7% during the 2016 elections.

A number of main opposition groups boycotted the vote, saying the election was a risk to public health and wasn't being held under free and fair conditions. But others broke with that block and decided to run.

The vote, initially planned for April, had to be postponed due to the pandemic.

Sunday's election went ahead with face masks, gloves and hand sanitizer handed out at polling stations, where physical distancing rules were in place.

Serbia is still reporting dozens of new cases each day after easing its lockdown. On Sunday, authorities reported 91 new infections and one more fatality, bringing the death toll to 261.

Although Vucic was not up for reelection, he has played a leading role in the campaign, using the media outlets he owns to deride the opposition and promote his party.

Critics warn he is becoming increasingly authoritarian, and say he has sought to erode democratic freedoms since coming to power in 2012.

A major item on the future government’s agenda is pushing for EU membership for Serbia. At the same time, Brussels and the US will be pressuring Belgrade to recognize Kosovo’s independence. US-brokered talks on Kosovo's future are to be held in Washington on June 27. Serbia rejects Kosovo's 2008 declaration, a stance which is supported by Russia and China.

The tariffs had been imposed in 2018 as a result of Serbia's efforts to block Kosovo's access to international agencies like Interpol. (01.04.2020)