A new bout of violence rocked Serbia despite the government's ban on mass gatherings. The protesters decry the state's handling of the pandemic, with many of them pelting the police with bottles, rocks and flares. 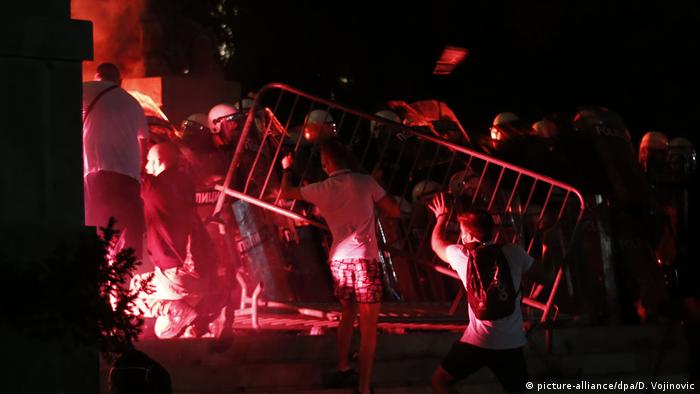 Hundreds of protesters in Serbia clashed with the police in front of the parliament building in Belgrade on Friday, as protests rocked the country for the fourth consecutive day. Serbia faces a new wave of coronavirus infections, which the protesters blame on the government's pandemic policy.

Despite the ban on mass gatherings, thousands rallied in Belgrade and other major cities. Groups of protesters threw bottles, rocks and flares at the police guarding the parliament. The rioters also used the protective metal fence around the building as a weapon in the scuffles with the police.

The police fired tear gas at the protesters and prevented people from entering the building.

Fourteen police officers were injured in the rioting, and 71 people have been detained so far, said police director Vladimir Rebic. Several reporters have also been hurt. 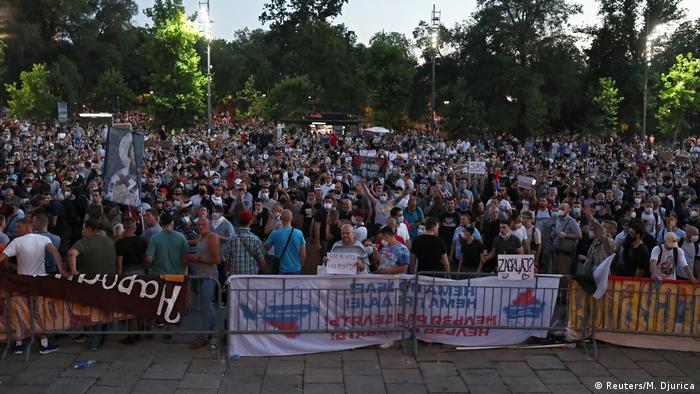 Protesters gathered outside the parliament building in Belgrade

The protests happened hours after President Aleksandar Vucic said that he was not worried about losing political power despite the unrest. Vucic also told RTV Pink, a pro-government news channel, that protesters attacking "brave" policemen would be arrested.

Some opposition leaders in Serbia alleged that Friday's attack on the parliament was orchestrated by demonstrators controlled by the government.

The most intense protests since 2000

Serbia is in the grip of the most intense protests since 2000, over the Vucic government's coronavirus measures.

The government had imposed draconian lockdown measures in the earlier stages of the outbreak, but then lifted all coronavirus restrictions as the country was nearing a parliamentary election.

In the days following the election, top medical officials and Vucic himself raised the alarm over the galloping infections and the increasing strain on the country's ineffective healthcare system.

On Tuesday, Vucic announced gatherings of over five people would be banned starting on Wednesday, and that a curfew would be reintroduced from Friday evening until Monday morning, but did not specify if the decision would apply to the whole country.

He has since changed his mind, with the country's emergency coronavirus council declaring a ban on mass gatherings but stopping short of a curfew.

Protests began on Tuesday against the government's measures, stretching into a fourth consecutive day on Friday.

Protesters briefly managed to breach the parliament building during hourslong unrest on Wednesday. Vucic has described protesters against his government as "criminal hooligans."