The stage is now set for a final Senate vote next week that could secure Amy Coney Barrett's seat on the top court ahead of the US election. The vote took place despite a total abstention by all Democratic members. 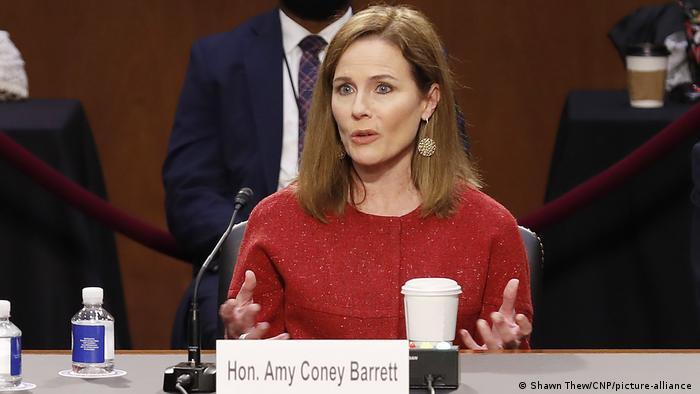 All 12 Republican members of the panel voted unanimously to advance Barrett's nomination to the full 100-member Senate, which is expected to make a final decision on Monday.

The 10 Democratic senators on the committee refused to show up in protest of the Republican party's rush to install Trump's nominee to replace late Justice Ruth Bader Ginsburg. Instead of attending, Democrats displayed posters at their desks of Americans they say have benefited from the Affordable Care Act.

The committee has never before confirmed a Supreme Court nominee so close to a presidential election.

"We did it. Judge Barrett's nomination is going to the floor," said Chairman Lindsey Graham, the top Republican on the committee. "This is a groundbreaking, historic moment for the American legal community and really politically."

The 48-year-old conservative judge's ascent to the top court would lock a 6-3 conservative majority on the court for the foreseeable future. That could open a new era of rulings on the Affordable Care Act, abortion access and even the results of the presidential election. 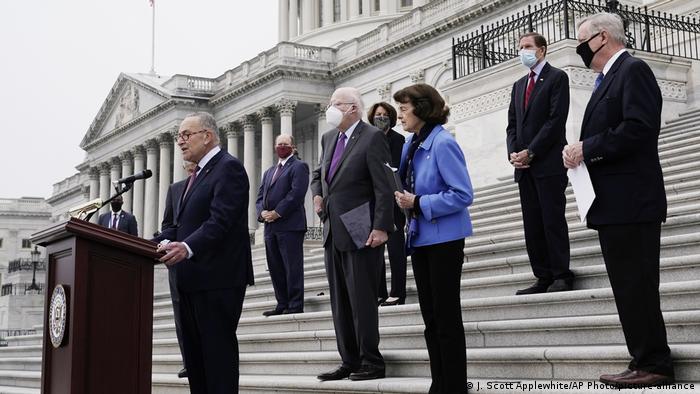 Republicans moved forward with the vote despite a committee rule that two members of the minority party — the Democrats — be present in order to conduct business. Graham said it was the Democrats' "choice" to boycott the vote, but "we're not going to allow them to take over the committee."

Unable to stop the vote with a majority, Democratic senators have been taking all possible measures to stop the nomination before the November 3 election. Democrats argue that the winner of the election should be the one to nominate a judge to fill the vacancy on the Supreme Court.

With Republicans holding a 53-47 majority in the Senate, Trump's pick for the court is likely to be confirmed. All Democrats are expected to oppose Barrett's confirmation.

"We should not be moving forward on this nomination,'' Senate Democratic Leader Chuck Schumer said. He also called Barrett's views "so far out of the mainstream" and said Republicans were "concerned only with raw political power" in a "sham process."

Republicans slammed the Democrats' decision to abstain from the meeting.

"Rather than show up and do their job, they continue the theater,'' said Senator John Cornyn, a Republican from Texas, pointing out the posters at the senators' desks.

Trump has said he wants a judge seated in time to hear any potential disputes arising from the election. Barrett, an appellate court judge from Indiana, appeared for three days before the panel last week, fielding questions on her approach to abortion access, same-sex marriage, and a peaceful transfer of presidential power.

Many judicial nominees decline to discuss their views on certain issues, saying they will consider the issues on a case by case basis. Barrett took a similar approach, raising Democratic eyebrows after she had previously spoken out against abortion and past rulings on the Affordable Care Act.

Trump's party holds a 53-47 majority in the upper chamber of Congress, but not all Republican senators have publicly committed to voting for Barrett, partially because it is so close to the election.

Trump opponents rally for 'Women's March' across the US

Protesters demanded an end to Donald Trump's presidency and honored late liberal icon Ruth Bader Ginsburg at hundreds of marches around the US. Meanwhile, Trump continued his campaign push with a rally in Michigan.

US Supreme Court to review Trump's 'Remain in Mexico' policy

Donald Trump's asylum policy, which took effect last year, have kept tens of thousands of asylum seekers outside of the US. The Supreme Court agreed to take up two key Mexico-related cases after the November election.