US Supreme Court to review Trump's 'Remain in Mexico' policy

Donald Trump's asylum policy, which took effect last year, have kept tens of thousands of asylum seekers outside of the US. The Supreme Court agreed to take up two key Mexico-related cases after the November election. 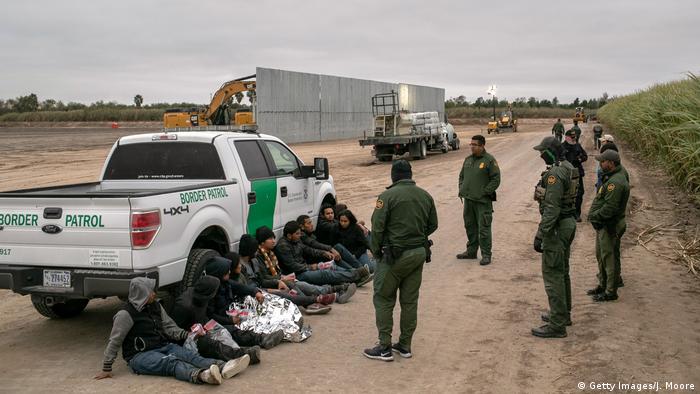 The US Supreme Court said Monday it would look into the legality of President Donald Trump's tough immigration policy that has kept tens of thousands of asylum seekers in Mexico, rather than enter the US while their claims were processed.

Trump's "Migrant Protection Protocols" policy, known informally as "Remain in Mexico," was a main pillar of the US' response to a surge of asylum-seeking families at the US-Mexico border.

The case was brought to the Supreme Court due to a Trump administration appeal against lower court rulings over the administration's hardline stance against immigration.

Immigration advocacy groups and 11 asylum seekers from Central American countries, including El Salvador, Guatemala and Honduras, filed a suit to challenge the policy.

"We look forward to making the same case before the Supreme Court and finally putting a stop to the administration's unconstitutional power grab," said Dror Ladin, a lawyer at the American Civil Liberties Union, which brought the case on behalf of other advocacy groups.

The other case involve a challenge to the diversion of military funds to build the US-Mexico border wall.

The Supreme Court already has a full schedule, so the law will likely not be reviewed until 2021. If Trump's Democratic opponent Joe Biden is elected in next month's election, the cases may become a moot point.

The law went into effect in January 2019, but has been challenged in lower courts several times. A federal judge blocked the program nationwide, saying that keeping asylum seekers in Mexico was contrary to the text of the Immigration and Nationality Act. The Ninth US Circuit Court of Appeals partially upheld the ruling in February.

The Supreme Court put the injunction on hold, however, allowing the policy to continue.

More than 60,000 asylum seekers were returned to Mexico due to the policy. The Justice Department estimated in February that there were 25,000 people still waiting in Mexico for their hearings in US court, but hearings have been halted due to the coronavirus pandemic.

Many children who have been forced to wait have faced hardships including violence and homelessness in Mexico while awaiting a trial date. Human rights groups said some have been victims of kidnapping, rape and assault.

In 2019, the Trump administration redirected $2.5 billion (€2.1 billion) from counter-narcotics programs to construct a border wall in California, New Mexico and Arizona. The money transfers enabled the administration to build more than 100 miles (160 km) of walls in places that the Department of Homeland Security considered ripe for smuggling drugs across the border.

Tear Down This Wall: Music Against Trump

The Southern Border Communities Coalition, a group that advocates for people in border areas, linked with the Sierra Club environmental group to block the action. They said the wall would harm the environment in part because it could worsen flooding and hurt wildlife.

The fund transfer was tried by the Supreme Court last year, but a 5-4 decision allowed the project to continue. The ninth US Court of Appeals subsequently ruled 2-1 that the movement of funds was unlawful because he did not have the constitutional authority to authorize a transfer.