The man calling himself the "King of Germany" has been sentenced for embezzling over a million euros ($1.1 million) from his "subjects." He had set up his own bank, spending depositors' funds for his own purposes. 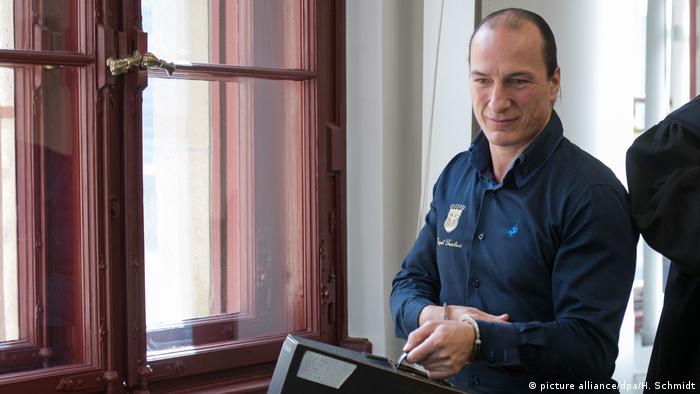 The judge in Wednesday's verdict ruled that the self-proclaimed "King of Germany" had run an illegal banking operation between 2009 and 2013, in which effectively stole over a million euros in deposited funds.

The 51-year-old, whose real name is Peter Fitzek, had convinced almost 600 people to deposit a total of 1.7 million euros into his supposed bank. The prosecution had accused him of spending around 1.3 million euros for his own purposes, charges the "king" denied.

When the ruling was read out, Fitzek - who calls himself Peter I - erupted into a violent rage, launching insults at the judge.

Sporting the crown since 2012

After training as a chef, working as a karate instructor and owning his own tattoo studio, Fitzek twice campaigned to become mayor in his town in the German state of Saxony-Anhalt. On both occasions, he won just 0.7 percent of the vote.

Deciding that democracy wasn't his thing, he went on to found the "Kingdom of Germany" in 2012, declaring himself as king. His kingdom consists of little more than an abandoned hospital in the eastern German town of Wittenberg.

A bizarre video of his coronation was posted online.

However, his highness managed to gather a following of hundreds of "subjects," most of whom deposited money on to savings accounts they had opened with Fitzek's "bank."

This was not the first time Peter I had had to grace the courtroom. Last year, the "King" was caught driving without a licence for an eighth time. He gave up his German licence in favor one he "authorized" himself.

Fitzek's fantastical kingdom mirrors the radical Reichsbürger("Citizens of the Reich")  movement, which believes that the 1937 borders of the German Empire still exist and that modern-day Germany is simply an administrative construct still occupied by the Western powers.

They refuse to pay taxes, issue their own ID cards and passports, and have declared their own small territories, such as the Second German Empire" and the "Free State of Prussia."

However, while easily dismissed as crackpots, many Reichsbürger ascribe to right-wing, ant-Semitic and Nazi ideologies.

Many are also believed to be heavily armed. Last October, the movement gained attention in the media after one member shot dead a policeman in Bavaria.