Searching for ET outside Berlin

Some believe that aliens may have already visited us here on earth, leaving signs such as crop circles in our fields. Two new crop circles have recently appeared outside Berlin and are attracting the curious. 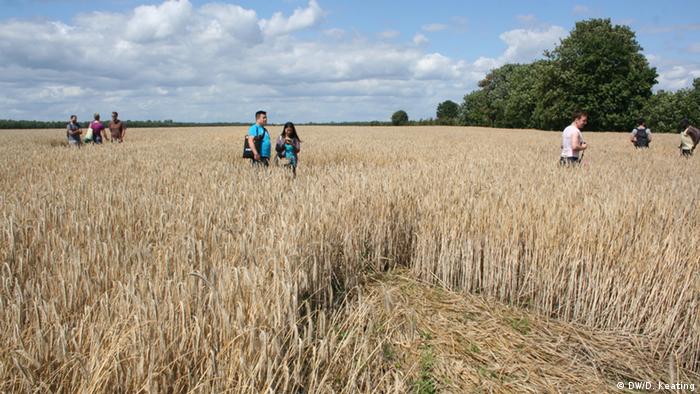 The search for extraterrestrial life got a big boost recently when Russian billionaire Yuri Milner and physicist Stephen Hawking unveiled a $100 million project to search for signs of aliens. The call is likely to be taken up by UFO enthusiasts, who believe aliens may have already visited us here on earth, leaving signs such as crop circles in our fields.

The latest focus for that curiosity is the quiet suburb of Schönefeld outside Berlin. It is near one of the city's airports, but aside from the normal airplanes, some believe that there may have been some paranormal flying in the area's vast wheat fields too. That's because geometric patterns have formed in these fields recently. These "crop circles" are a global phenomenon that some believe are caused by clandestine extraterrestrial visits.

The sun is shining down upon a group of 15 curious people and skeptics, who want to check out if these patterns could really have been caused by a landing UFO.

One of them is Sarika Sinha, who lives in Berlin. This is her second visit to the site. The last time she came with a group of crop circle enthusiasts who travel the world looking at these patterns.

"Maybe four weeks after I got to Berlin I started looking for groups of people who have information on aliens and UFOs, and a week later, I joined a meet-up group and this popped up, so I thought why not just take a look."

Sarika and the rest of the group are busy examining the crop circles and the possibility that there could be life beyond earth. The field pattern is made up of a series of circles connected by lines. From the air, it looks like a large flower pattern. The patterns can easily be spotted by flights taking off and landing at the nearby airport. Leo Ferronato came to look at the Berlin crop circles after experiencing one near his hometown in Brazil. 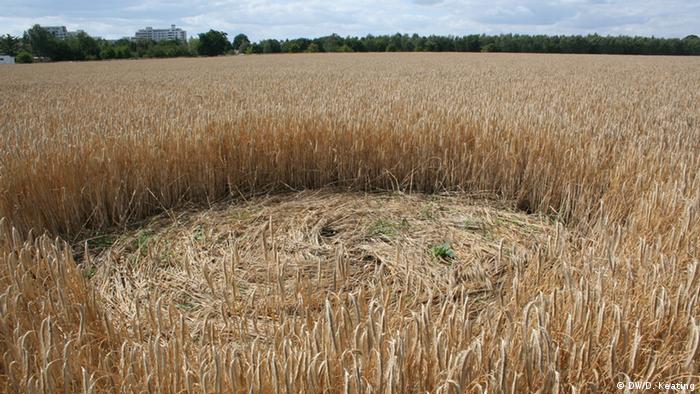 'I was expecting to see more geometrical folding of the wheat,' Leo Ferronato from Brazil said

"I'm from a small town in Brazil and the first registered crop circle in Brazil was in a nearby town. The first one was very simple, two rings, and it amazed a lot of the population because it had never happened before. A lot of people thought it was fake because it was so simple, but a few years ago we had it again, in another part of town. The second time it was a little bit more complex."

Having seen the Brazilian ones, Ferronato isn't so convinced by the Berlin circles.

"I was expecting to see some more geometrical folding of the wheat, but it looks to me like someone with a piece of wood was walking around and doing the patterns."

Is there other life out there?

He says he heard that people's mobile phones would shut off at other crop circle sites, something that has not happened in Schönefeld. Sinha explains that she isn't sure whether the crop circles are man-made or extra-terrestrial in nature. On her previous visit, she challenged her guide for any proof that the pattern wasn't just made by pranksters:

"He replied that he'd heard that after the crop circles appeared, the area was cordoned off by police cars and there were helicopters circling the area; that made both of us think maybe that's not a normal response to breaking and entering."

Crop circles started being documented in the 1970s and have increased over time. But there has never been any evidence that they are anything other than man-made. Suspiciously, they usually appear near major highways or airports. But the doubt that hangs over them doesn't seem to prevent a continuing fascination with them which just fuels our collective curiosity about the possibility of extra-terrestrial life.

This fascination was given a boost last week with the launch of Milner and Hawking's breakthrough Listen project. It's a ten-year venture to search for life in the universe. Their backing has lent increased legitimacy to a science that has so far hovered on the fringes. 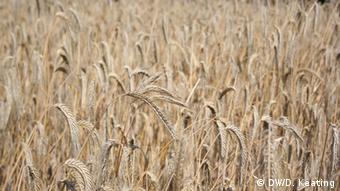 'In an infinite universe, there must be other occurences of life.'

Scientists have been searching the skies for radio signals from distant planets for more than 50 years, but it has remained an underfunded and understaffed endeavor. The new initiative will use the existing database organized by the SETI (Search for Extra Terrestrial Intelligence) program and apply new technology to boost the search. It will use powerful telescopes, software and hardware to search up to 50 times more of the radio spectrum than before.

The new funding will also work to create a unified message from all the people of earth to send out to other solar systems. Hawking announced the project last week:

"In an infinite universe, there must be other occurrences of life. It's time to commit to finding the answer to the search for life beyond earth. The breakthrough initiatives are making that commitment. We are alive, we are intelligent, we must know." 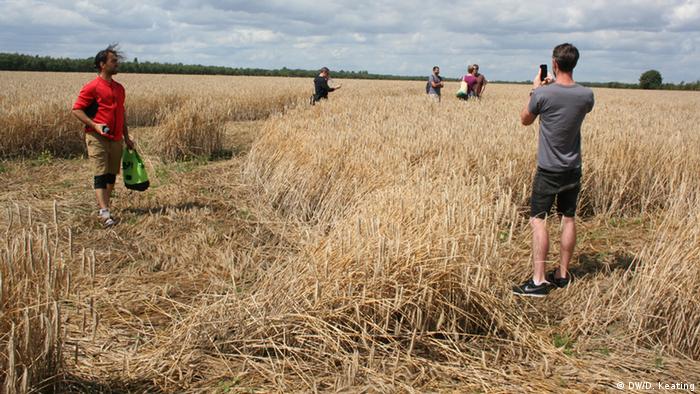 "I want it to be true that aliens are out there," said Sarika Sinha.

Perhaps most importantly, the new project will also allow people at home to participate. The idea is to give people the ability to look themselves at the data being collected on their home computers or even their smartphones. This crowdsourcing technique is designed to tap into the public's enthusiasm for the possibility of the existence of alien life, and avoid having to pay hundreds of researchers. For Sinha, the question is too exciting to ignore.

"It's an opportunity to let your curiosity run wild. In the same way that people on earth have been exploring other cultures and other countries, the reason that we take vacations in other places, it's all about discovery. So the idea of discovering that there are various civilizations in the universe that could be living their lives totally differently is very exciting. I want it to be true that aliens are out there, that they've visited. I don't really want it to be true that the US government or any other government is doing secret deals with aliens or cross-breeding exchanges, that's a little creepy."

Whether or not the breakthrough project finds any alien life, it will certainly give people an outlet to channel their curiosity which Sinha mentions which might mean tours of crop circles in places like Berlin have their days numbered.