Italian police arrested the German captain of a migrant rescue ship after she docked at the port of Lampedusa. Sea-Watch told DW Italy is the safest option and bringing migrants to Germany is risky and time consuming. 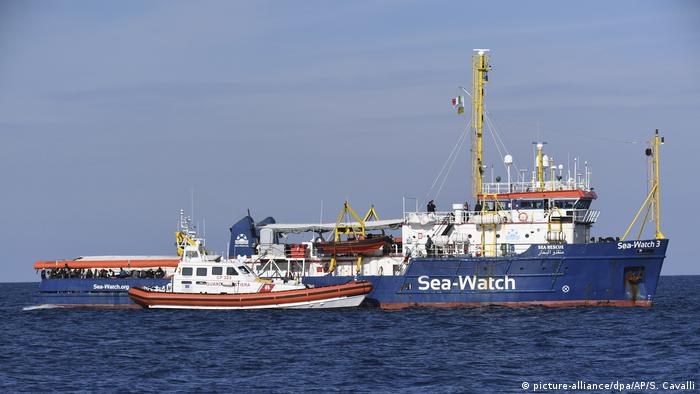 Sea-Watch 3 entered the Italian port of Lampedusa without authorization early Saturday following a two-week standoff between the charity ship's captain and Italian authorities.

German captain Carola Rackete was arrested as the boat docked with 40 migrants remaining on board, spokesman Ruben Neugebauer told Agence France-Presse. Television footage showed a heavy security presence at the port and police escorting 31-year-old Rackete off the vessel.

Italy had refused the German rescue ship port entry since it picked up 53 migrants who were floating on an inflatable raft off the Libyan coast on June 12.

After waiting at sea for an invitation from Italy or an EU state to accept the ship, Rackete decided to head to Lampedusa, where she was blocked by Italian government vessels.

"Even though in the afternoon the prosecution has opened an investigation against me, at the same time they notified us that they will not help to bring the rescued off the ship," Rackete said in a video statement on Twitter. "I have decided to enter the harbor, which is free at night, on my own."

Sea-Watch told DW that its boats are unable to bring migrants to Germany or the Netherlands because both countries are too far away from the search and rescue (SAR) zone off Libya, and this could allow for lives to be lost in the SAR while they were making the journey there and back.

The boats would also have to go via the Atlantic Ocean and through the Gulf of Biscay where the sea is much rougher than in the Mediterranean.

"We cannot impose this rough journey on weakened people which we have rescued from the sea," a Sea-Watch spokesperson said. "Secondly, we don't want to send our ship on a 5-week journey to Hamburg when it is desperately needed back in the SAR zone."

Sea-Watch also said that the law of the sea and several SAR conventions asks rescuers to take rescued people to the nearest place of safety.

Italian Interior Minister Matteo Salvini has implemented a "closed ports" policy as part of efforts to crack down on immigration. He had previously said he would only allow Sea-Watch to dock if other EU states agreed to accept the migrants.

Rackete's arrest comes after five European countries on Friday agreed to that, signaling a possible end to the standoff.

Italy's Foreign Ministry said that Finland, France, Germany, Luxembourg and Portugal had agreed to host the estimated 40 African migrants remaining on the ship.

Foreign Minister Enzo Moavero offered his "sincere thanks" to the countries for their "positive response."

However, it was not immediately clear when or where the migrants would be allowed to disembark.

"We are waiting for precise guarantees on numbers, timelines and means," Interior Ministry sources told AFP.

European Commission spokeswoman Natasha Bertaud said it was too early to provide details, as "intense contacts (were) still going on with many member states."

Speaking to journalists earlier on Friday, Rackete warned that the situation on the ship was "incredibly tense, getting worse and worse."

Several of the most vulnerable people had been allowed to disembark, but Salvini has said that no more are welcome in Italy.

On Wednesday, Rackete decided she had no choice but to illegally enter Italian waters. Salvini responded by threatening to seize the ship and fine Rackete. Italian prosecutors were also reportedly were exploring charges against Rackete of aiding illegal immigration.

Rackete has said that the migrants rescued by the Sea-Watch 3 are victims of trauma, and uncertainty over their fate is causing tensions to mount aboard the small vessel.

"The necessity to go into port is to prevent any harm or any self-harm which people might be contemplating," she said.

Italy's far-right interior minister has condemned the seizure of the ship, saying migrants on board should not have set foot in Italy. However, the condition of the refugees had swayed the authorities' opinion. (20.05.2019)