Italian authorities have given permission for a sick man and his brother to disembark from Sea-Watch 3. The boat is still carrying some 40 migrants and has been sitting in international waters for more than two weeks. 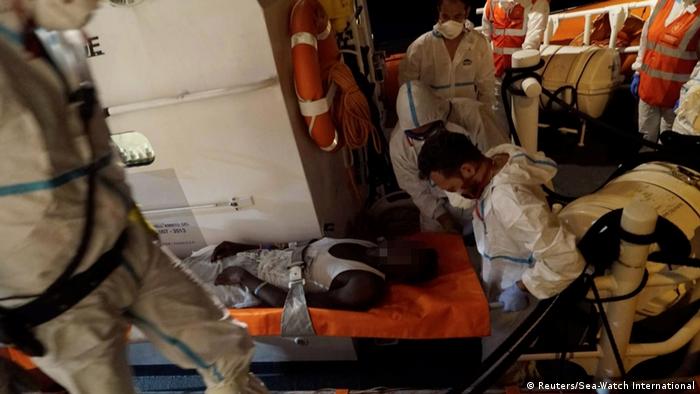 "A medical evacuation just took place. One patient under serious pain and his brother were disembarked from #SeaWatch3," Sea-Watch tweeted.

"We cannot wait for every single person to become a medical emergency until Europe recognizes they have basic rights," Sea-Watch quoted the ship's captain, Carola Rackete, as saying.

She added later that "at the moment the situation is incredibly tense, getting worse and worse," and that the uncertainty was adding to the trauma the refugees had already encountered traveling to Europe.

On June 12, there had been 53 migrants on board who had been rescued off the coast of Libya.

Italy has already taken in several vulnerable people on medical or humanitarian grounds, but it has refused to take in the others.

Italy hopes to pass migrants to other EU states

Tensions between Sea-Watch 3 and the Italian authorities escalated on Wednesday after the vessel entered Italian waters despite the threat of substantial fines from far-right Interior Minister Matteo Salvini.

Salvini has said the migrants can only leave the boat if they head straight to the Netherlands, where the Sea-Watch 3 is registered, or to Germany. He has also slammed Rackete as "that uppity captain...a heroine from the left, born white, rich and German."

Speaking on the sidelines of the G20 summit in the Japanese city of Osaka, Italian Prime Minister Giuseppe Conte said he had "news that three to four countries would be available" for the redistribution of migrants, without specifying which nations.

On Thursday, EU Migration Commissioner Dimitris Avramopoulos said Brussels was "closely involved in coordinating with the member states to find a solution for relocating the migrants on board Sea-Watch 3 once they are disembarked."

A group of five Italian left-wing MPs spent the night on board the ship in a gesture of solidarity.

"We'll remain on board until all of the migrants have disembarked," said Graziano Delrio, who was the minister in charge of the Italian coast guard between 2015 and 2018.

Italy has allowed 10 rescued migrants on the Sea-Watch 3 to leave the vessel. Two pregnant women and two sick men are among those who have been given permission to disembark. (16.06.2019)