A 2014 referendum saw 55% of voters opposing Scottish independence, but nationalists argue that the 2016 UK referendum in favor of Brexit calls for another vote. In Scotland, 62% voted to stay in the EU. 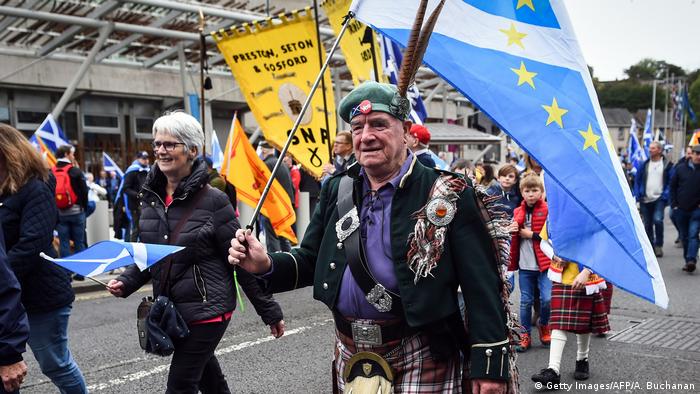 Calls for a fresh independence referendum are getting louder in Scotland just weeks before a possible British exit from the European Union. On Saturday, thousands of people participated in a pro-independence rally in Edinburgh.

Demonstrators were carrying Scottish flags, some wearing kilts and playing bagpipes, as they began their rally from Holyrood Park in the Scottish capital.

Organizers of the march said hundreds of thousands of people took part in the event. Police estimates were not immediately available.

Joanna Cherry, a Scottish Nationalist Party (SNP) lawmaker, was one of the prominent rally participants. Cherry was behind the successful legal challenge to Prime Minister Boris Johnson's decision to prorogue Parliament in September. She was also one of the lawmakers that voted in favor of a law to force Johnson to ask the EU for more time to avoid leaving the 28-nation bloc without a deal.

Nationalists in Scotland are demanding a new independence referendum from Britain. Although Scotland voted against independence in 2014, pro-independence groups say the fact that 62% of Scots voted in favor of staying in the EU in the 2016 Brexit referendum shows that Scotland no longer wants to stay with Britain as it leaves the EU.

Nationalists have argued that some people voted against Scottish independence thinking it would guarantee their place inside the EU.

Nicola Sturgeon, first minister and leader of the SNP, argued that Brexit will devastate Scotland's economy. Sturgeon has lent her support for a second independence referendum in 2021.

Scotland's First Minister Nicola Sturgeon has told DW she hopes the UK's Supreme Court rules that the prorogation of parliament was unlawful. Judges must choose between Scottish and English interpretations of the law. (18.09.2019)

'Scotland wants to trade as freely as possible with Europe'

Scotland overwhelmingly voted to remain in the EU in 2016. As the Scottish Trade Minister Ivan McKee explained in an interview with DW, the country is eager to promote itself in the face of ongoing UK political chaos. (12.12.2018)