Schalke′s Weston McKennie: ′I want to be the one that people remember′ | Sports| German football and major international sports news | DW | 15.08.2017

Schalke's Weston McKennie: 'I want to be the one that people remember'

Just down the road from Dortmund another American is hoping to reach the heights of Christian Pulisic. DW sat down with Schalke's Weston McKennie to find out more about the Gelsenkirchen club's American midfielder.

Leaving the pristine green of the training pitch, a group in blue and white shirts carefully navigates its way through the rubble and the potholes around Schalke's facilities. Franco di Santo, Ralf Fährmann and new boss Domenico Tedesco took a detour down the rocks to take selfies and sign autographs through the holes in the temporary fence. And, having put down the drinks cooler, so did Weston McKennie.

"I don't like disappointing anyone. Whenever I'm down here and walking past the fans, I might be carrying two mannequins and a ball bag and something, but I still try and stop," McKennie tells DW.

The soon-to-be 19-year-old midfielder from the States has quickly impressed in Schalke's youth set-up and after a strong preseason, finds himself in the first team squad for the new campaign. And to think, he might have never made it to Gelsenkirchen had he made a different choice seven years ago.

"I used to go to my soccer games and my coach would say 'If we go up by two goals or if you just score a goal, you can leave.' So I'd try and help do that real quick then I'd leave. I was 10 or 11 years old. On the way to my [American] football game, I'd be getting changed in the car and my mom would be stressing about getting to the game late. I put my pads on, pick up my helmet, run to the field, get subbed on and play the rest of the game," McKennie says.

A huge Washington Redskins fan, McKennie's talent at American football saw him play on offense, defense and special teams. "I think I could have made it if I'd have stuck with it."

But after a summer in Germany and a phone call or two, McKennie's future lay with the round ball. At Schalke, Norbert Elgert took McKennie under his wing and changed the young man's future.

"He's a role model for me. He was my coach, but you can still say your coach is your role model," McKennie says of the man who nurtured the likes of Leroy Sane, Mesut Özil and Benedikt Höwedes.

For all the bad press Schalke get about holding onto their talents they certainly know how to raise them, and McKennie is the latest case in point. Elgert's role was, and continues to be, pivotal, but that support hasn't stopped now that McKennie is in the first team squad. The midfielder is locker room buddies with Benedikt Höwedes and regularly swaps tips with Leon Goretzka, a man he jokingly calls sir.

"Honestly, I get advice from everyone. And I'm like no problem, tell me more. How I take it is, if they're criticizing me, one it's because they care about me and two because I have room to improve," says McKennie, whose favorite player when he was growing up was Francesco Totti. 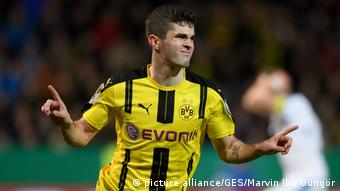 The Texan, though, has always been just fine on his own. Between the ages of 10 and 13, McKennie made five or six international trips alone. He went to a different school every year of his high school career, and even did online school for his senior year.

The grown-up-fast-teenager who hasn't forgotten how to smile is determined to get to his destination. "If you can stand the feeling of losing, you have to rethink," he says.

"I told Bastian Oczipka, I'm probably the most annoying young kid that has ever come through the academy," McKennie jokes. "The only part that makes me feel 18 when I'm on the field is having to carry out the equipment before training. I feel like, yes am I growing up fast, but it's part of the job."

Schalke's task this season will be to return to European football. Lofty ambitions have long haunted the Royal Blues and with the club not looking like it can take much more disappointment, the pressure is on McKennie and co. to succeed under new head coach Domenico Tedesco. 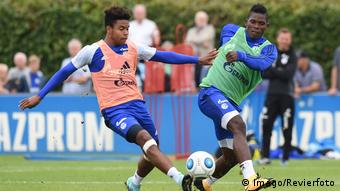 McKennie has many friends in the squad, Breel Embolo is one of them

On the same page

"He's one of the youngest coaches in the Bundesliga and he's not shying away from the challenge. He's not backing off. He's going at it full throttle. That's kinda how I try to take it onto the field," McKennie said of Tedesco, who can be heard swapping between German, French, English and Spanish on Schalke's training pitch. McKennie is grateful his head coach takes the time to explain things in English, but his German - particularly his accent - is impressive and it isn't the only language he can speak. "I'm from Dallas, I have to speak Spanish," he added, with a wry smile.

McKennie hopes this is the season he bursts onto the scene, just like his friend and local rival Christian Pulisic. "This guy is something else. He's a young prodigy. I know he doesn't like it when people say that because he's a really humble kid," McKennie said of his first friend at US soccer youth level.

It would be difficult to write a better script. McKennie and Pulisic, after a season impressing on both sides of the Bundesliga's leading rivalry, leading the US towards a successful 2018 World Cup campaign in Russia. McKennie knows a good season at club level must come first, but he's approaching it with the same youthful abandon. "I mean, I may be young but it's worth a try."