Schäuble defends German trade surplus in the US | Business | Economy and finance news from a German perspective | DW | 20.04.2017

Schäuble defends German trade surplus in the US

The German finance minister has rejected US charges that Germany's trade surplus is a sign of unfair policies and called on the Trump administration to remain engaged in trade liberalization. 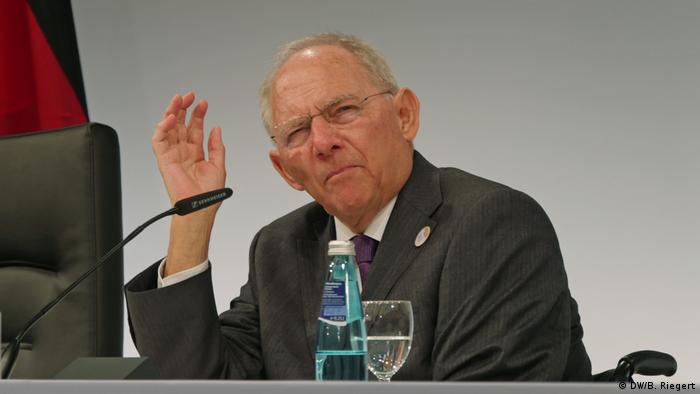 Speaking at an event of the Carnegie Foundation in Washington on Thursday, Wolfgang Schäuble said that "all of us have benefited greatly from global integration and trade in recent decades," and that Washington had been a leader in the process.

The German finance minister's remarks came in the wake of the Trump administration's protectionist rhetoric that has created a tense atmosphere for meetings of the International Monetary Fund (IMF) and World Bank over the next few days.

"Surely it's in America's own interest to ensure security and economic stability" in its trade partners, Schäuble said.

Trump economic officials have focused on attacking individual countries for their trade surplus with the United States rather than looking at global trade more broadly.

Under the chairmanship of Wolfgang Schäuble, Germany will host a gathering of the Group of 20 finance ministers and central bankers in Washington on Friday, where currencies and trade are a regular part of the agenda.

For the meeting, the German finance minister is reported to have prepared a seven-page paper listing 29 points on the issue of Germany's massive trade surplus with the rest of the world.

In 2016, Germany exported goods worth 253 billion euros ($270 billion) more than it imported. The current account surplus, which also includes services, was even higher at 266 billion euros.

This has given rise to criticism by the Trump administration, IMF chief Christine Lagarde and French presidential candidate Emmanuel Macron. Donald Trump's top trade advisor, Peter Navarro, for example, has accused Germany of exploiting a "grossly undervalued" euro to boost its exports.

As Wolfgang Schäuble is expecting to hear more complaints in Washington this weekend, his staff has prepared a paper designed to dismiss any such criticism. The document reads like an introduction to the basics of economic theory.

First of all, Germany does not see the current account balance as a so-called key control parameter because it can only be controlled by political policy in extremely limited areas.

"The German trade surplus is primarily the result of market-based supply and demand decisions made by companies and private consumers in the global marketplace," the paper says

Structural factors that policy cannot change in the short term are "the high competitiveness of German exporters on the global markets," but also the high quality and complexity of Germany's industrial products.

The paper also emphasizes that Germany's current account surplus has already reached its zenith. In 2015, it was 8.6 percent of gross national product (GDP) while in 2016, it sank to 8.3 percent. "Current forecasts assume a further surplus drop to 7.5 percent in this year and to 7 percent next year," the paper notes.

The document likewise claims that Germany's high foreign asset holdings are a main contributor to the high surpluses. It resulted from high levels of capital exports, with German companies and private citizens investing much more money abroad than domestically to take advantage of new markets and to generate higher returns.

These foreign assets produced profits that increased the country's current account surplus. The paper further argues that the American economy is one of the primary beneficiaries of German capital exports.

"German investors are among the largest foreign employers in the US," the document reads. They hold a stake in more than 3,000 American companies, which employ around 672,000 people and account for a total turnover of 466 billion euros. In the years up to 2015, German companies invested around $319 billion in the US, making the country the third-largest direct foreign investor in the US.

Trade imbalances of the kind the new Trump administration is complaining about, the German government experts say, aren't a bad thing. Rather, they are "normal in an open economy." Indeed, "they are the expression of diverse comparative advantages held by different national economies and their associated specialties." Each country does what it can do best.

The authors of the paper do not dispute that the extreme imbalance could "justify economic policy intervention." But the Finance Ministry believes that Germany has already taken significant steps to reduce the surplus. One example listed in the paper is the minimum wage that was introduced in 2015 and was increased at the start of 2017. During the same period, tax cuts worth 11 billion euros have been introduced. "These measures increase domestic demand."

Plus, the government has increased public investment by 45 percent and introduced measures to increase private investment. "The current rate of investment is likely to increase slightly this year from 20 to 20.2 percent in relation to gross domestic product."

Berlin is increasingly worried that the new US administration might accuse it of currency manipulation. Trump has already indicated that he would do so in the case of China, before surprisingly pulling a step back last week.

In conclusion, Schäuble's paper says that the country's current account surplus is not particularly meaningful. In the global comparison, the eurozone's trade balance with the rest of the world is decisive. "California's trade balance with China is just as insignificant in the debate as Germany's with the U.S. should be," it says.