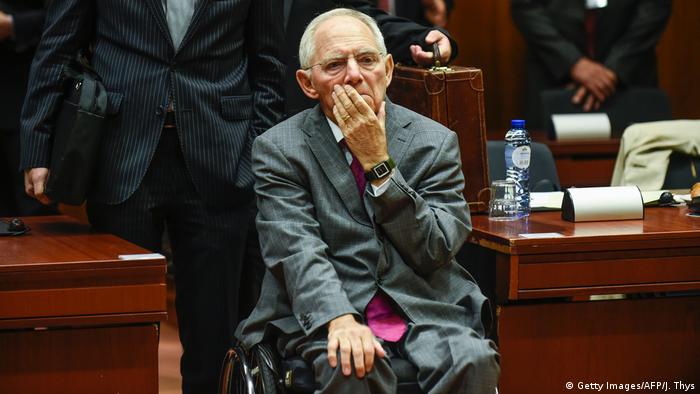 Wolfgang Schäuble, a senior member of Chancellor Angela Merkel's Christian Democrats (CDU), on Monday expressed confidence that Germany would soon get a stable government comprising the CDU, the Greens and the Free Democrats (FDP).

"Let things play out. There will be a way," Schäuble told a special edition of German newspaper Bild am Sonntag. He added that a "Jamaica coalition" was just a matter of time, as "we need a stable government for our country."

The so-called Jamaica coalition, named because the three parties' traditional colors of black, yellow and green correspond to the Caribbean country's flag, is being seen as Chancellor Angela Merkel's best shot at forming a government after the Social Democrats ended their partnership with her CDU, following a dismal show in general elections last month.

But coalition talks are expected to be lengthy and tricky with the three parties having vast ideological and policy differences, including on immigration.

The Greens on Saturday unanimously approved exploratory talks with the business-friendly FDP and the CDU to form the next government.

In the same interview, Schäuble also dismissed the importance of settling on a cap on the number of refugees coming to Germany every year. This has been a sticking point between some members of Merkel's CDU and their Bavarian sister party, the Christian Social Union (CSU).

The CSU calls for a ceiling on refugees, a demand that Merkel has repeatedly turned down. The Greens and the FDP similarly oppose any cap on migrants.

The 75-year-old conservative said the issue of a refugee cap does not need to be part of a possible coalition contract.

Schäuble also defended Merkel's open-door policy at the peak of the refugee crisis in 2015.

"Our children will be proud of the readiness to help shown by Germans during the refugee crisis," he said.

'No-one can wreck our democracy'

Schäuble, who is due to become president of Germany's next parliament, expressed optimism that Germany's democratic institutions would withstand the entry of the far-right Alternative for Germany (AfD) in Bundestag.

Lawmakers in Germany's other parties have accused the AfD of whipping up anti-foreigner sentiment and violating the country's political norms.

"Our free, democratic system based on the rule of law is so strong that nobody can wreck it, neither from within nor from without. Anybody who tries will fail," said Schäuble, who is Germany's longest-serving parliamentarian.

Chancellor Angela Merkel has the backing of nearly 60 percent of voters to form a ruling coalition with the Greens and FDP, a new survey says. However, Germany may have to wait until the new year for a new government. (29.09.2017)