Sarkozy Calls for Global Summit to Overhaul Financial System | Europe | News and current affairs from around the continent | DW | 23.09.2008

French President Sarkozy called Tuesday for a summit to tackle the global financial crisis and urged world leaders to draw lessons from capitalist excesses in a speech before the UN General Assembly. 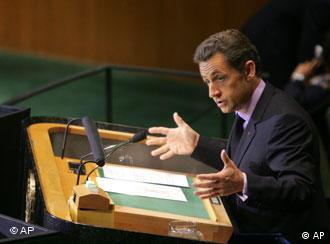 In a hard-hitting speech before the UN General Assembly in New York on Tuesday, Sept 23, French President Nicolas Sarkozy demanded that those responsible for the global financial turbulence be punished and called for a "regulated capitalism."

"Today, millions of people across the world fear for their savings, for their apartment, for the funds they have put in banks. It is our duty to give them clear answers," the French president, who chairs the EU's presidency, said. "Who is responsible for this disaster? May those who are responsible be punished and held accountable," he said. 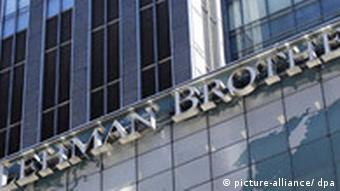 In his first public statements on the financial crisis which has rattled world markets and sparked a $700 billion US rescue package, Sarkozy urged major powers to devise a new form of regulated market economics that would prevent the excesses behind the current credit crisis which felled investment bank Lehman Brothers.

He however did not spell out who was responsible for the global upheaval, how the system should be reformed and why governments in Europe and the US did not act earlier to stem the crisis.

Addressing the 63rd session of the UN General Assembly which has been dominated by the financial upheaval on Wall Street, Sarkozy urged world leaders to draw lessons from the global financial crisis, rebuild a system that regulates the markets, curb speculation, increase transparency and punish the reckless.

"It's the duty of heads of state and government of the countries most directly concerned to meet before the end of the year to examine together the lessons of the most serious financial crisis the world has experienced since that of the 1930s," Sarkozy said.

"Let us rebuild together a regulated capitalism in which whole swathes of financial activity are not left to the sole judgment of market operators, in which banks do their job, which is to finance economic development rather than engage in speculation," Sarkozy said.

The French leader criticized hedge funds and credit ratings agencies for their roles in the current crisis and denounced pay practices in investment banks.

In a press conference afterwards, Sarkozy called for a summit in November to deal with the crisis, adding he had in mind a "G8 format," referring to the eight leading economic powers, that could be opened to "emerging countries."

The G8 is made up of the United States, France, Britain, Germany, Italy, Japan, Canada and Russia. 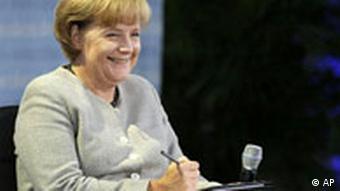 Speaking in French through an interpreter, Sarkozy called for "rules that apply to all and serve to avert and soften shocks instead of exacerbating them."

Like Sarkozy, other European leaders, chiefly Germany's Chancellor Angela Merkel, have voiced annoyance at what they perceive as US failures to implement more stringent financial controls.

Both Sarkozy and Merkel have complained that their calls last year for tighter regulation of the markets were shunted aside by the United States and Britain.

Separately, speaking on behalf of the 27-member European Union, Sarkozy also appealed for a "continent-wide economic space" between Europe and Russia.

At the same time, Sarkozy warned Russia after its war with Georgia that force cannot be used to settle disputes.

"Europe is also telling Russia ... it cannot compromise on the principle of states' sovereignty and independence, their territorial integrity, or respect for international law," he said´.

Sarkozy brokered a ceasefire to end the conflict between Georgia and Russia last month, although the United States and EU countries have sharply criticized Russia for what they described as its excessive use of force.

Sarkozy also said the EU would never tolerate a nuclear-armed Iran, "which would endanger the peace and stability of an entire region, nor can it tolerate Iran calling for the destruction of ... Israel."

He told reporters that Paris fully supported a fourth round of sanctions against Iran for refusing to suspend its nuclear enrichment program, but acknowledged that Western powers would need Russia's support to pass a new UN sanctions resolution.

The chaos in the US has Europeans believing they'll have the upper hand in future regulatory negotiations. Not so fast, Irwin Collier of the John F. Kennedy Institute at Berlin's Free University told DW-WORLD.DE. (23.09.2008)

Germany Says it Sees No Need for Own US-style Bailout

Germany said on Monday it sees no need to create a US-style financial sector bailout of its own as Chancellor Merkel renewed calls for tighter regulation of the financial sector. (22.09.2008)