The rise of migration, as well as, the threat of terrorism has sparked a new interest in the Sahel region. Experts on security in the region give an insight into the new importance of the age-old trade routes. 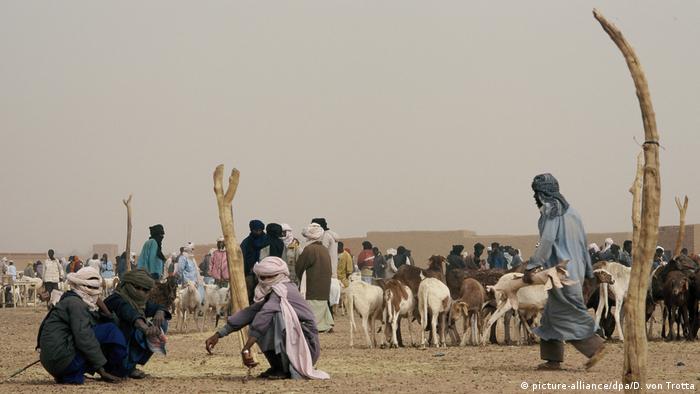 The Sahel region is made up centuries-old routes - routes that have been used for the movement of people, goods, weapons and drugs. And over the centuries these routes haven't changed, said Wolf-Christian Paes,  who was addressing a panel of security experts for the region. Paes has worked for several peace and disarmament missions for Germany, the EU and other international organizations. Today he works with the think-tank Bonn International Center for Conversion (BICC).

The informal and often criminal networks across the Sahel region, which includes countries like Mauritania, Mali, Niger, Algeria, and Chad, have flourished in recent years. The vast arid region has often been neglected by the governments, or governments have turned a blind eye to what goes on there, as Paes explained.  "You're dealing with a zone that is stateless to a large extent. The state is not seen as a positive actor, as someone who provides you with services, safety, education, health care and so on. But rather as just another bandit." Consequently, he said, many communities living in the region have learnt to fend for themselves.

Sani Adamu Mohamme,d who heads the Small Arms Control Division at the Economic Community of West African States (ECOWAS), confirms what he views as governments' failure to integrate the communities into the Sahel's major trading hubs.  Towns like Agadez in Niger or small border towns, he said, are the most affected.  "Most border communities are far away from their capital," Mohammed said.  "There are no facilities that will allow socio-economic activities to thrive. Border communities are desperate. Any activity that is coming their way, they will embrace it." 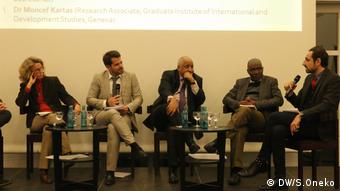 The fall of Gadhafi, drug trade and the use of the old networks have all lead to the situation we have today explains Kartas

The fall of Gadhafi

In an age of large migration flows, the threat of terrorist attacks and increasingly interconnected terrorist networks, such as  Boko Haram, al Qaeda in the Maghreb (AQIM) and ISIS , the Sahel region has caught the attention both western and African governments. "I think that that's not only true for policymakers in Germany. I think the whole Sahel region also came to the attention of the general public in Germany and in Europe," explained Susanne Baumann, Deputy Commissioner for Disarmament and Arms Control in Germany's Foreign Office.

A rise in the trade of arms and illicit movements in general can mainly be traced back to the fall of Moammar Gadhafi's regime in Libya. At the time, Gaddafi's large arsenal of weapons was plundered and sold across the region, said Moncef Kartas, a researcher of the Graduate Institute of International and Development Studies, in Geneva.  Other conflicts in the region, like the Islamist insurgency in Mali in 2012 have had similar, albeit smaller effects. "Weapons from governments in the Sahel region have been traced as far away as Somalia and Yemen," said Paes. In general, the experts agreed that the region's weapon stockpiles need better management and guarding.

The illicit trade in drugs like cocaine has also added to the insecurity in the Sahel. "Before trafficking was there, it was obviously illegal because people were not respecting tariffs and customs, but now with those commodities like drugs, smugglers became really heavily armed," said Kartas.  Suddenly, he said, the goods were no longer worth $ 50,000 (47,000 euro) but millions.

For Germany, the movement of people across the countries of the Sahel has become a major point of focus, irrespective of whether it's human trafficking or the flow of migrants and refugees. Aside from military support such as contributing to the EZ training mission in Mali, Germany has lead the way in approaching governments in Eritrea, Ethiopia, Sudan and West Africa about curbing the flow of people.  Many of these countries are known to disregard human rights, and Sudan's President Omar al-Bashir stands accused of war crimes by the International Criminal Court (ICC) in the Hague.

In December, the European Union pledged 170 million euro ($159 million) to tackle migration, improve conditions in the countries of origin, as well as, methods to monitor the movements.

These migration partnerships have two sides, explained Paes. "Assisting refugees on the way and there's nothing to be said against that, because, of course, the humanitarian situation of all these people is catastrophic. But it also looks to strengthening border control and improving law enforcement."

This part of the deal, however, would demand some soul-searching on the part of the European governments. "Do we really think that the local elites in say Khartoum have an interest in stopping the migrants from Somalia and Eritrea from coming towards our shores. We always call for the state and then we assume that the state is doing what it says but often local elites have no interests in doing so."

Better coordination is needed and that is something that the experts agreed on. Yet when it comes to the who, where and how, opinions diverge.

ECOWAS has several policies in place to control trade, arms and movements of people. The policies just need to be implemented, noted  ECOWAS's Sani Adamu Mohammed. He applauded Germany for its involvement in the EU training mission in Mali, but international organizations really needed to coordinate their activities better. "There is a lot of duplication of effort and resources," he added.

At the same time Zahabi Sidi Mohamed, former foreign minister of Mali, said that greater awareness of problems such as radicalization amongst local communities. Organizations like the UN also need to stop turning a blind eye. "We, the Malian government, see these things. But when we ask the UN , why don't you do anything on drug trafficking or human trafficking, they will say it's not in their mandate."

On Wednesday, the German government agreed to raise the limit in the number of troops it can send to Mali from 650 to 1,000. Susanne Baumann from Germany's foreign ministry, however maintained that Germany still hopes to place a stronger emphasis on training and civilian aid, than military involvement.

"Crisis–Stabilization–Order: Courses of action for the Sahel” was hosted by the Bonn International Center for Conversion (BICC) and chaired by DW's West Africa correspondent Jan-Philipp Scholz.

This weekend President Hollande attends his last Africa-France summit. On taking office, he pledged to break with 'Francafrique' but almost five years later the French footprint in Africa appears undiminished. (12.01.2017)