Russia′s hypersonic missiles ― what you need to know | Science | In-depth reporting on science and technology | DW | 22.03.2022

Russia's hypersonic missiles ― what you need to know

Russia claims to have used hypersonic weapons in Ukraine. They are extremely fast and can evade interception for longer than conventional ballistic missiles. 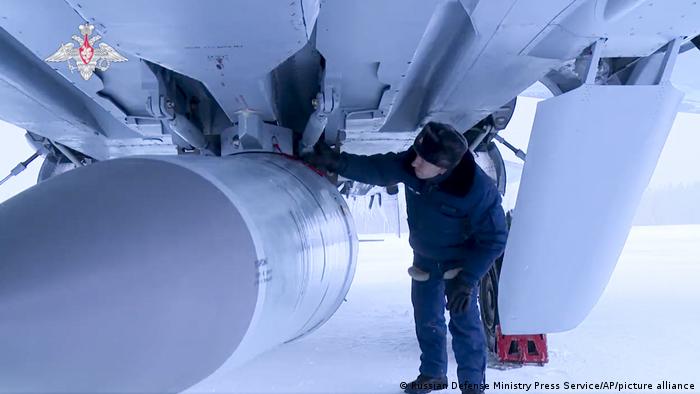 Russia released images of Kinzhal missiles during a military drill in February, days before its invasion of Ukraine

Almost four weeks into Russia's war on Ukraine, one strike last Friday was like no other so far. The target was an underground arms and munition depot in the small village of Deliatyn, 100 kilometers (62 miles) from Ukraine's border with Romania.

The attack stood out — not only because the facility was destroyed — but also because Russia had used a hypersonic missile for the first time in the Ukraine war.

"Invincible." That's what Russian President Vladimir Putin called hypersonic missiles in 2018 when he unveiled his country's arsenal of the missiles.

It was perhaps a lofty description, designed for propaganda purposes, but there was some element of truth. Hypersonic missiles differ from conventional ballistic weapons in ways that make them harder to catch by missile defense systems. It comes down to speed and altitude.

How fast are hypersonic missiles?

Hypersonic missiles fly five to ten times as fast as the speed of sound. That's known as Mach 5 to Mach 10.There is no fixed speed of sound because it depends on variables, namely the medium and the temperature of the medium through which an object or soundwave moves.

But as a comparison, the Concorde commercial airplane flew at about twice the speed of sound. Concorde was a supersonic aircraft that had a maximum cruising speed of 2,180 km (1,354 miles) per hour, or Mach 2.04. So hypersonic takes those speeds at least three notches higher.

The hypersonic missile that Russia used on the depot in Deliatyn is known as a "Kinzhal," or dagger. It is 8 meters long.

Some experts say this type of missile flies as fast as 6,000 kilometers per hour, which would be around Mach 5. Others say it flies at Mach 9 or even Mach 10.

Either way, it's fast. So fast, in fact, that "the air pressure in front of the weapon forms a plasma cloud as it moves, absorbing radio waves," the weapons experts at US website Military.com explain.

That makes "Kinzhal" and other hypersonic weapons very hard to catch on radar systems, an effect compunded by their low altitude.

Hypersonic missiles fly at a much lower altitude than conventional ballistic missiles.

They follow what is known as a low atmospheric-ballistic trajectory. That means that by the time a radar-based missile defense system clocks them, they are already so close to their target that in many cases it is too late to intercept them.

On top of that, hypersonic missiles can change direction midflight.

What is their range?

The hypersonic missile used by Russia in Ukraine was fired from the air, most likely from a MiG-31 warplane.

Hypersonic weapons can also be deployed from ships and submarines. They are capable of carrying nuclear warheads.

If hypersonic missiles were stationed in the Russian territory of Kaliningrad, that would put several European capitals within their reach. Kaliningrad is separate from the Russian mainland and borders Poland, Lithuania and the Baltic Sea. The German capital Berlin is less than 600 kilometers away.

But some analysts say the attack on Deliatyn in Ukraine was an isolated event and that despite the advantages that hypersonic missiles have over conventional ballistic missiles, Russia won't use their "invincible" weapons indiscriminately.

The Speed of Sound (NASA)

Hypersonic missiles show 'Russia is not going to back down': DW's Nick Connolly from Lviv

While the fight for supremacy on the battlefield continues, it seems the fight for the hearts and minds of the Russian people may have already been won. Support for the war remains high; so too does indifference. Pollsters are trying to find out why.