The Kremlin has stressed its sovereign right to deploy missiles on Russian territory after reports that the country deployed the Iskander nuclear-capable missile system in Kaliningrad on the Baltic Sea. 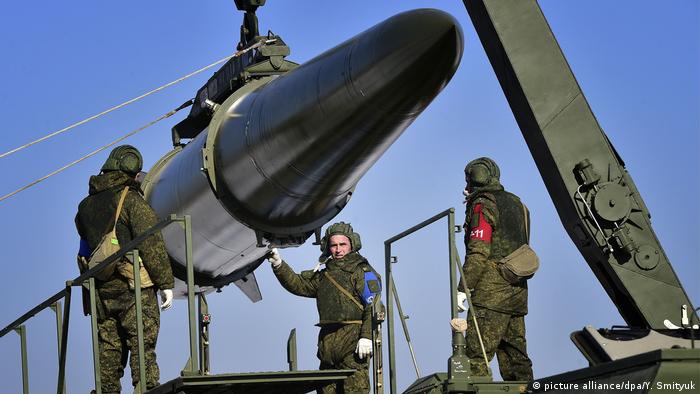 On Tuesday, Russia claimed the right to put weapons anywhere it chooses on its own territory after reports that the country had deployed nuclear-capable Iskander missiles in Kaliningrad drew criticism from its neighbors and NATO.

Kaliningrad is a Russian exclave on the Baltic Sea, and the missiles would be able to reach large parts of NATO members Poland, Lithuania, Latvia and Estonia.

The president of Lithuania, which neighbors Kaliningrad, and a senior Russian lawmaker both said the missile systems had been deployed to the region. Russia has not confirmed the deployment.

Asked about the reports on a conference call with journalists, Kremlin spokesman Dmitry Peskov said: "The deployment of one weapon or another, the deployment of military units and so forth on Russian territory, is exclusively a sovereign issue for the Russian Federation. Russia has never threatened anyone and is not threatening anyone. Naturally, Russia has this sovereign right. It should hardly be cause for anyone to worry."

"It means that what we have been talking about — the necessity to discuss strengthening air defense elements during the NATO summit in July, strengthening the chain of command, to talk about many questions that affect defense of our region and Latvia specifically — it all has been confirmed by the practical actions of Russia," Rinkevics said.

The reported placement of Iskander missiles so close to NATO territory is perceived by some alliance members as a threat at a time when tensions between Russia and its neighbors are running high over Moscow's 2014 annexation of Crimea.

"This again makes the situation even more serious because Iskanders in Kaliningrad is a danger to half of European capitals," Lithuanian President Dalia Grybauskaite said on Monday.

The Kremlin has often announced plans to station Iskander missiles in Kaliningrad to counter the US missile shield being developed in Eastern Europe. Washington claims that the shield is to counter possible missile attacks by Iran. However, Russian officials say it is directed against their country.

Speaking on condition of anonymity, a NATO official said: "Any deployment close to our borders of missiles that can carry nuclear warheads does not help to lower tensions. In the spirit of transparency, we look forward to hearing more from Russia on this."

Russian President Vladimir Putin has said Russia will "take countermeasures" in response to NATO expansion. Deployment of the S-400 air missile defense system and ballistic Iskander missiles in Kaliningrad is a start. (21.11.2016)