Russia′s ambassador to Turkey assassinated in Ankara | News and current affairs from Germany and around the world | DW | 19.12.2016

Russia's Ambassador Andrei Karlov has been shot dead in the Turkish capital, Ankara. The attack comes amid a peak in anti-Russian sentiments in Turkey sparked by Moscow's handling of the war in Syria.

Russia's ambassador to Turkey Andrei Karlov has died after suffering fatal gunshot wounds while he was speaking at an art gallery in the Turkish capital, Ankara. In graphic footage from the actual shooting, the gunman is seen shouting the words "Allahu Akbar," "revenge" and "Aleppo" before assassinating the ambassador with at least nine shots from the back. 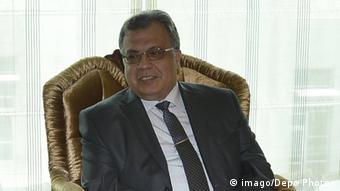 "Today in Ankara as a result of an attack, the ambassador of the Russian Federation to Turkey, Andrey Gennadyevich Karlov, received a wound from which he died," Zakharova said. "We regard this as a terrorist act," she added.

Russia's foreign minister Sergei Lavrov emphasized that there should be no "concessions to terrorists" during talks today with his Turkish counterpart on Syria.

"This tragedy forces all of us to fight more decisively against terrorism," Lavrov told Turkey's Mevlut Cavusoglu as they sat down together in Moscow.

"For this reason, I very much hope that our talks and the upcoming three-way meeting with our Iranian colleague will allow us to reach agreements, which will through concrete actions advance the settlement in Syria," Lavrov said, also insisting that they should not allow "any concessions to terrorists".

Ambassador Karlov served as Russia's representative to Turkey since 2013.

The Interior Ministry later confirmed that the gunman had been involved in special operations with riot police. His mother and sister have since reportedly been detained in the western Turkish city of Aydin.

The Russian Foreign Ministry said that medics had tried to treat the diplomat at the scene while shooting continued, retracting an earlier report that emergency services had managed to take him to hospital. Turkish news outlets reported that three other people had also sustained wounds during the exchange of fire at the art gallery. 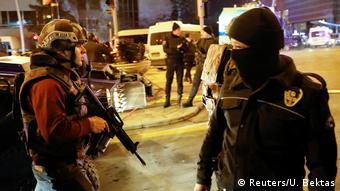 Police confirmed that they had 'neutralized' the assailant, while it remained unsure whether the hostile situation was still unfolding

Turkish police have meanwhile reportedly beefed up security around the Russian embassy after the attack, as further assaults could be planned. A temporary blackout on related coverage has also been imposed.

Turkey has undergone more than a dozen major terrorist attacks in the past 18 months claimed either by the co-called "Islamic State" (IS) or the Kurdistan Workers' Party (PKK), which has been waging an insurgency in the country for more than 30 years.

A failed coup earlier in the year led to the declaration of an ongoing nationwide state-of-emergency, which saw scores of dissident voices being placed under arrest across Turkey, adding fuel at hostile sentiments against the government.

The incident occurred following several days of rallies across Turkey, with protestors holding Moscow responsible for human rights violations and mass killings in Aleppo in neighboring Syria. Turkey has the highest number of Syrians refugees, with migrants from Syria increasingly turning into a political bargaining tool.

Turkey has been a vocal opponent of Syrian President Bashar al-Assad - while Russia has deployed troops and its air force in support of the Syrian leader. Turkey and Russia underwent a major diplomatic crises after Turkey shot down a Russian fighterjet along the Turkish-Syrian border in 2015.

"The European Union condemns in the strongest possible manner this attack against your country's representative in Turkey. We wish to express our solidarity with Russia in the face of this criminal act of violence," she said in a statement.

US Secretary of State John Kerry also joined the voices of those condemning the killing of the Russian ambassador:

"We stand ready to offer assistance to Russia and Turkey as they investigate this despicable attack, which was also an assault on the right of all diplomats to safely and securely advance and represent their nations around the world."

US ambassador to the United Nations Samantha Power meanwhile said on Twitter that she would "Strongly condemn savage attack on Russian ambassador to Turkey Andrey Karlov and several other people."