US Secretary of State John Kerry has met with his Russian counterpart Sergei Lavrov in Paris. The two discussed the withdrawal of troops from the Ukrainian border and the sharing of intelligence on "Islamic State." 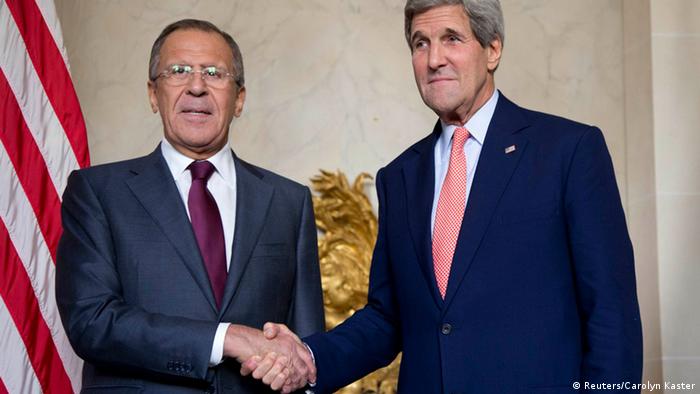 US Secretary of State John Kerry and Russian Foreign Minister Sergei Lavrov met in Paris on Tuesday to discuss a number of issues, including the crisis in Ukraine, which has heavily strained Moscow-Washington ties.

Kerry said that Russian troops were withdrawing from Ukraine – a necessary initiative to have Western sanctions lifted.

"There are four to five principal requirements with respect to lifting the sanctions: release of hostages, release of all prisoners, is one; the withdrawal of troops and equipment is another," Kerry said after meeting Lavrov in Paris.

"And at this point ... many of them are happening now, the troops are pulling back, the heavy equipment still has to be pulled back and the border is yet to be properly monitored and secured."

Before Tuesday's meeting, Russian President Vladimir Putin - who will meet with Ukrainian President Petro Poroshenko - had called back over 17,000 soldiers which had been stationed at the Ukrainian border since the summer.

Lavrov tried to convince Kerry to remove sanctions against Russia, which have been having a massive impact on the country's economy and could have long-lasting repercussions.

"We do not know who is losing out more in economic terms: Russia or the European Union," he said before flying to Paris.

Kerry also said the US and Russia would share intelligence on "Islamic State" (IS) militia currently fighting in Iraq and Syria.

"I suggested to Foreign Minister Lavrov that we intensify intelligence cooperation with respect to ISIL and other counter-terrorism challenges of the region and we agreed to do so," Kerry said, using an alternative name for IS jihadists.

"The foreign minister indeed acknowledged their preparedness to help with respect to arms, weapons, they are doing that now, they already have provided some, and also potentially with the training and advising aspects," he added.

Lavrov agreed that while Moscow and Washington still had "differences of opinion," they both had a particular role to play in resolving global problems.

This could mark a turn for Moscow-Washington ties, as Moscow has previously supported Damascus and spoken out against US airstrikes on IS in Syria.

Before Tuesday's meeting in Paris, the Ukrainian parliament voted for a sweeping reform of the Prosecutor General's office and also to set up a national anti-corruption agency.

The reforms are seen as a nod towards the EU, which has made them a condition for closer political and financial cooperation.

The parliament also voted in favor of Stepan Poltorak as Kyiv's new defense minister in a 245-1 vote. His candidacy had been submitted on Monday by President Petro Poroshenko, after Valeriy Heletey was dismissed from that post.

Poltorak is the country's fifth defense minister this year and the fourth since the Russian annexation of Crimea and the subsequent pro-Russian rebel uprising in the east of the country.

The president dismissed Heletey on Sunday after just three and a half months in office. He was widely criticized after the Ukrainian army suffered setbacks in the conflict with separatists in eastern Ukraine in August.

Meanwhile, seven civilians were killed on Tuesday and 17 injured when artillery shells hit a village outside the city of Mariupol, according to local authorities. A ceasefire in eastern Ukraine came into force at the beginning of September. Sporadic fighting has continued nonetheless.

Iraqi Christian village takes the fight to 'IS'

While the world's focus is on Kobani, "Islamic State" fighters are continuing their campaign against minorities in Iraq. In the ancient village of Al Qosh, a group of poorly armed Christians are trying to stop them. (13.10.2014)