Iraqi Christian village takes the fight to 'IS'

While the world's focus is on Kobani, "Islamic State" fighters are continuing their campaign against minorities in Iraq. In the ancient village of Al Qosh, a group of poorly armed Christians are trying to stop them. 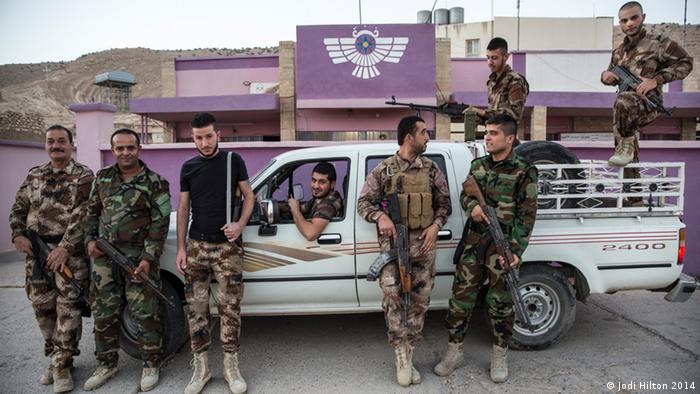 Mrayma Mansour, who leads the night patrol of Assyrian Christian fighters in the town of Al Qosh, looks jumpy. He has a dagger tucked into the waist band of his fatigues and his large green eyes are bloodshot.

Around him sit his men, holding hand-me-down weapons and drinking sugary tea. The talk is of betrayal. When the Kurdish peshmerga forces retreated from the "Islamic State" (IS) advance on Christian towns at the beginning of August, Mrayma's and his men stayed on, not knowing if Al Qosh would be attacked. IS forces were just a few kilometers south. Almost all the residents fled, fearing the worst. "We had 70-80 men who stayed and stood watch on the mountain," he said. "They were from different local parties, fighters, men with guns. We were scared thieves would come."

Al Qosh, an Assyrian Christian town of around 6,000 people, overlooks the flat Ninawa plains from its hillside perch. Families are now cautiously returning and peshmerga fighters are pushing back again on the front line, just 15 kilometers away. A lone-shopkeeper mans a corner store in the boarded up bazaar. The afternoon tolling of the church bells and the passing of an occasional vehicle punctuate the silence. The 7th century Rabban Hormizd monastery built in the cliffs overlooking the town is closed due to the security situation. 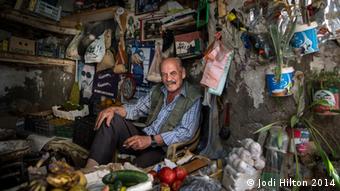 A semblance of normalcy

An air of unease still cloaks the town. A few peshmerga checkpoints dot the road between here and the front line just outside the town of Tel Isqof. Mrayma saw the peshmerga retreating from his lookout. "I saw cars and tanks withdrawing from Tel Isqof to Dohuk," he says, "when we saw this we told our families to go because it's not safe."

Now the Christian fighters, who dress in camouflage and drive rusted-out vehicles, are determined to protect their beloved town, but they know they are no match for the IS forces. Instead they reassure residents and stay alert for signs of the peshmerga retreating. "If I see them withdrawing I know [IS] is coming so it is a good alarm," he says, adding, "If they leave us and go what can we do? [IS] will kill us without weapons."

Hemin Hawrami, who heads the Kurdistan Democratic Party's foreign relations office, said that the peshmerga forces were "outgunned" by IS. There are around 100 fighters with the Assyrian Democratic Movement, and around 2,000 volunteers ready to fight, as well as forces aligned to different Christian parties. 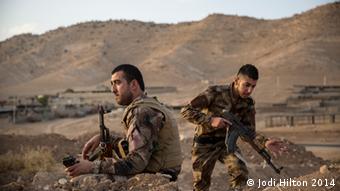 Arms are bought privately or come from the Assyrian Democratic Movement and their supporters, say leaders.

In such a small community, rumors travel fast. Thaer is Mrayma's father-in-law. Over a lunch of cracked wheat in their airy home, he says "yesterday people were shouting, telling us to leave our homes, but that was just a rumor." He looks down. "Nobody knows why ISIS didn't come here, maybe it is because we are in the mountains. But we are still scared, at any time we could be attacked."

A village vs. IS

A deacon with the local church of Saint George, Wadhah Sabih, leans over and whispers to DW as prayers are recited in the ancient Syriac language. "We've defended Al Qosh many times against different enemies over centuries. But right now it's impossible to defend ourselves," he continues in hushed tones. "The army can't stand before IS - so how can a small village? IS sold themselves to the devil."

Christians are angry about being pushed from their ancient heartlands - August 10 this year was the first Sunday in centuries that the church bells of Saint George in Al Qosh didn't ring, Wadhah tells DW. 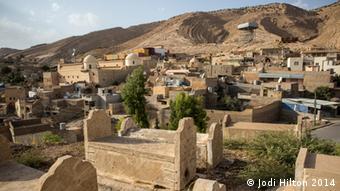 Traditions and rites are under threat

Before 2003 it was estimated that there was 1.5 million Christians in Iraq, now there are around 400,000 left, many with plans to leave. Caught between Kurdish and Arab Iraq , the Ninawa plains has long been fought over, but when IS forces swept into control Mosul, ethnic and religious minorities say they felt terrified.

After massacres and the widespread displacement of the Yazidis religious minority, a new Yazidi fighting force was set up for self-protection around Sinjar.

"In Sinjar the [Yazidi] people don't trust strange men, Kurd or Arab, to protect them - they want a share in protecting themselves. We don't want to split Iraq, we just want to be in charge of our own place," says Yaqoob Yaqo, an Assyrian Democratic Movement member of the Kurdish Regional parliament.

Christian politicians say other minorities in the Ninawa plains should also be able to protect themselves, including Shabaks and Yazidis. But it is unlikely that divergent militia groups will be able to defeat the IS fighters. Yaqoob knows that to have any fighting chance, they need backup.

The fighters have so far requested support; weapons, training and tactical coordination from Baghdad and Erbil. They have also called for international protection, in the form of a safe zone.

Mrayma echoes the views of many when he says that if international support is not given to his people, "I will get my passport, family and try to go to another country because it won't be safe here."

On a rocky bern at the edge of the town, Assyrian fighters continue to vigilantly man the defence as evening falls. A young fighter stares out at the flat burnt plains below him. Back in the town the church bells are tolling again. On narrow streets in the old heart of Al Qosh, a baby is being taken to be baptized. The people here have lost trust in their protectors; but they don't yet know who in this conflict they can depend on.

The terrorist militia "Islamic State" is reported to have abducted, raped and abused thousands of Yazidi women. Thomas von der Osten-Sacken says it is a targeted attempt to destroy this religious community. (06.10.2014)