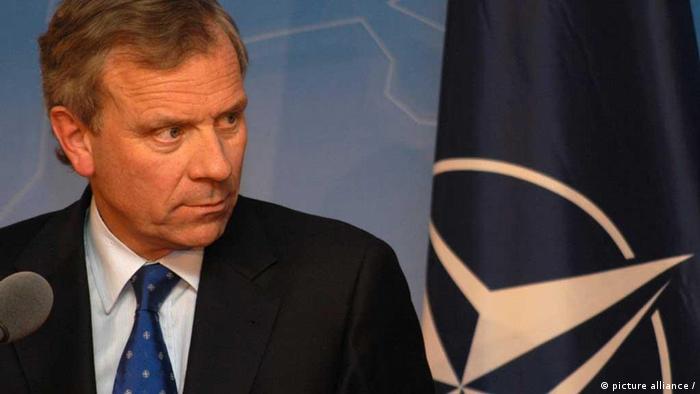 Russia is realizing that it pays a price for supporting Assad, says former head of NATO

DW: Turkey and the US have said they would increase their efforts to supply the Syrian opposition with non-military assistance to help them in their struggle against the Assad regime. Should other nations follow that example?

Jaap De Hoop Scheffer: That could be done non-lethally. I am not specifically in favor of supplying arms to the opposition because the opposition has many faces and you don't know whom you are giving the weapons to. But I think this example could be followed, but then I would underline the word non-lethal.

How effective can that assistance be against an apparently increasingly ruthless campaign by Assad's forces?

It will never be 100 percent effective, but this good initiative shows that the political process and the Kofi Annan mediation process is the key. Assad may stay in power much longer than you and I might think and the opposition doesn't form one front. It is now absolutely imperative that the bloodshed stops and that Annan with Russian help, because Russia is key, would be able to organize a ceasefire and the beginning of a political dialogue. I think that's the only way forward in Syria at the moment.

You mentioned Russia, the Assad regime's main remaining ally. It has recently supported the non-binding UN resolution on Syria and has also supported Kofi Annan's mission, saying it represented the last chance for Syria to avert full-scale civil war. Is Moscow due to international pressure now finally shifting from its support for Assad or how would you interpret Russia's move?

I think that indeed the Russian position is changing. But Kofi Annan as the representative not only of the United Nations, but also of the Arab League is key here. And the Russians and I think Putin realizes that his strong support for Assad and his murderous regime means paying a price for instance in the relationship between Russia and the rest of the Arab world and the Gulf states. I know that there are business circles in Moscow who are looking at Putin's strong support for Assad not without concern. In other words: I do think that Russia is key in Annan succeeding and starting a political dialogue.

What would you expect from Russia?

That they agree that this Annan-driven political process starts and that Russia and other relevant nations like Turkey as Syria's neighbor, Jordan and of course the West, the US and other Western nations, get serious in a sort of contact group to get a political dialogue going and give the opposition a face. As soon as you start a political process, the opposition however divided it might be, will also have a voice. The opposition doesn't have a voice at the moment and Assad goes on with his killing machine.

To stop the killing and to organize an immediate ceasefire is in my opinion the only way forward. We need the Russians for that. We need the Chinese for that by the way, but the Chinese I think are a little less strong in their support for Assad. The Russians and Chinese, as you know, are still living in the political aftermath of Libya and they are afraid that if "the West" intervenes again we might see a repetition of Libya - which we will not.

Two prominent NATO members, the US and Turkey, are leading the efforts to help the Syrian rebels. Do you see a role for NATO as a whole in this?

No I do not quite honestly. I think bringing NATO to the fore would immediately ruffle so many feathers in Moscow that the political process might be harmed by that. I do not think the NATO allies or Secretary-General Rasmussen see a role for NATO. We shouldn't forget when we discuss Syria that this is not only regional political, but this is geopolitical. Syria brings Iran into the discussion and Iran's relation with Hamas and Hezbollah. Syria is a focal point in the Sunni-Shia divide, so it is such a complex process that the only way out and I keep repeating this is a serious political process. I do not see a military solution. I do not see any form of foreign military presence in Syria.

The only thing I want to see is stopping the bloodshed, stopping the killing, organizing a ceasefire, realizing Assad might be stronger than you and I think he is. And again: Getting rid of Assad is question number one. But seeing what kind of regime will replace Assad's murderous machine in Syria is also a very complicated question, because as you know there are many minorities in Syria who might not be so happy with a different kind of regime.

So do you think then that Assad's time is running out?

I think time is running out in the sense that everyday even as we speak innocent civilians are killed and murdered in Syria. And Assad has gone unpunished up to this very moment. And the international community is not capable, not willing to intervene militarily - I would be against a military intervention by the way - and there is no consensus in the Security Council at all. So we have to underline the political process, but let me say again that Assad is running a murder machine and that should stop.

What do you make of other nations from the region that have been supplying the rebels with weapons and military assistance?

One could do that. I can understand that some nations in the Arab world feel that they should do this, but on the whole I have my doubts in the usefulness of arming the opposition. I think non-lethal support is important. My preference would be a political process and certainly not arming the opposition, also because I can't answer the question who is or who are the opposition. That's awfully complicated in Syria.

According to a Human Rights Watch report from last week, the Syrian rebels have apparently also committed atrocities against Assad loyalists. Can the international community still maintain its support for the rebels if they resort to the same kind of human rights violations as the Assad regime?

That's an interesting and complicated question. If Human Rights Watch has it right, that the opposition is also committing serious crimes against civilians without proper trial, it does make the situation more complicated and it does make it much more complicated to supply arms to rebel groups of which we have many. And apparently it's not only the Assad machine which murders and kills, but also some elements - not the whole of course - of the opposition committing heinous crimes.

This weekend the international Friends of Syria group will meet in Istanbul. What do you expect from the conference after the demands of the group at their last meeting to open a humanitarian corridor and to agree to a cease-fire were ignored?

I am not THE military expert, but my NATO years have given my some military experience and politicians calling for a humanitarian corridor should also answer these questions: Do you need air forces and if so who is going to provide them? I don't see that. Do you need boots on the ground and if so who is going to provide those soldiers? In other words, about those calls also from the European Parliament for a humanitarian corridor, have those MEP's and others thought about the consequences?

The Friends of Syria can be very useful in discussing for instance the more civilian elements and non-lethal support to the opposition. But let's give Kofi Annan priority I would say.

How hopeful are you that the Annan mission will be successful and that perhaps the Assad regime will be gone by next year?

That's difficult. We thought a few months ago that Assad would perhaps have left by now. He's still there. He's rather dominant militarily in Syria, so it might be weeks if not months, but having any form of transition in Syria I say again will need the support of the permanent five members of the Security Council. And if there is one person in whom I have confidence that he will succeed - I know him very well - it's Kofi Annan. A better one than Kofi Annan doesn't exist. I don't see another man or woman who could probably achieve what I hope Kofi Annan will achieve, but it's an uphill struggle.

And finally a non-Syria question, what does the snub by President-elect Vladimir Putin who will probably not attend the NATO summit in Chicago mean for relations between Russia and the transatlantic alliance?

That's not the signal I am hoping for. I understand that no final decision has been taken. But Russia as an important NATO partner should be in Chicago. There should be a NATO-Russia council meeting at the level of the heads of states and governments which means that Mr. Putin should travel to Chicago. If he doesn't it's the wrong signal in the NATO-Russia relationship.

Russia is an important partner and I would hope that after the elections, whatever one might think about the elections, that Putin would reopen some doors which he has closed during the election campaign by heavily criticizing the United States and NATO more in general. So I still have hopes that the Russians will come to Chicago. Not going there would of course be a bad signal in the NATO-Russia relationship. That is certainly not what I am waiting for and that's not what the partnership between NATO and Russia needs.

The regime in Damascus has accepted a peace plan brokered by the UN and Arab League special envoy Kofi Annan, according to Annan's spokesman. (27.03.2012)

When NATO holds its summit this May in Chicago, there will not be the customary additional summit with Russia. Differences over NATO's missile shield plans have put dialogue and cooperation temporarily on hold. (24.03.2012)