Russian rebel fights for 'our land' in Ukraine

Bound by a feeling of duty to the place he was born, Sergei left his family and comfortable life in Germany to fight with the pro-Russia rebels in eastern Ukraine. Kitty Logan reports from the front line. 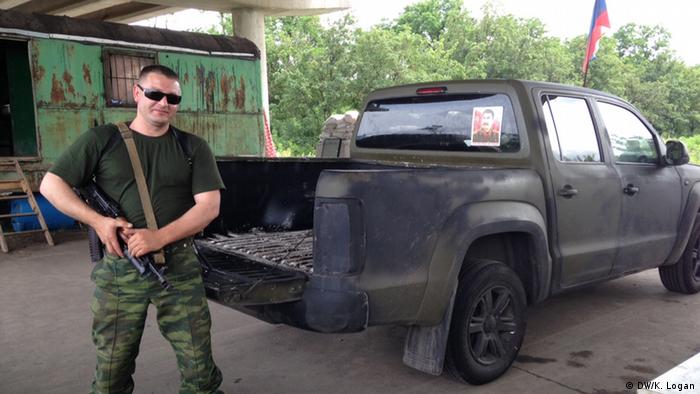 Russian-born Sergei, who goes by the military code name "Krest," crouches down by a metal railing on a bridge overlooking an open field. This is the rebel front line near Yasynuvata, not far from the strongly-contested area surrounding Donetsk airport. It is a major flashpoint, where fighting flares up almost daily. Sergei points to Ukrainian government positions in the fields towards the nearby town of Avdiivka. Below the bridge is a neat row of sandbagged bunkers, dotted evenly along a bank of earth, each manned by rebel fighters from the Vostok battalion, weapons ready. Further forward in the field, another line of soldiers faces Ukrainian government troops at close range. These are permanent positions, the two sides firmly entrenched and locked down in the same location for months; watching, waiting - and often exchanging fire.

Earlier sporadic gunfire paused, to be temporarily replaced with an eerie, tense silence. There is no sign of life here, other than the soldiers burrowed away deep in their fortifications. No civilians pass by, and what used to be a busy ring road to the airport is utterly deserted. There are not even any animals grazing in the fields. Sergei is keen to open fire on the Ukrainian forces, in revenge for the previous outburst. And so it starts up again, with a relentless barrage of small-arms fire. Within a minute, the return fire whizzes past us and Sergei dives into a trench. He screams out at his troops to hold fire. But there is no sense of alarm at the attack.

"They shoot at us every day," Sergei says, slightly out of breath after the short, but intense firefight. "Day and night. There's no calm." As he speaks this another bullet flies past and he ducks into a bunker.

It is no easy life for front-line soldiers on either side of this conflict, nor has Sergei chosen the easy option. He gave up a comfortable existence in Germany, where he lived for 25 years, to fight for the pro-Russia rebels in eastern Ukraine. 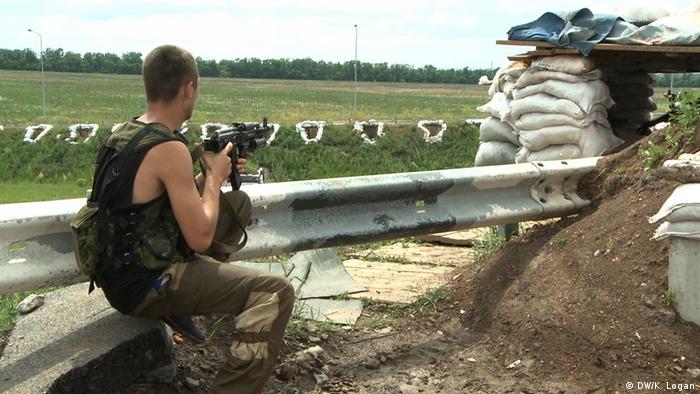 For Sergei's squadron, there is no ceasefire

"My mother is German. I have family in Germany. I have two children, a son and a daughter," he explains. "My parents also live in Germany. I had a business there. I closed it down and came here to help."

Sergei is now a squadron leader for this unit of the Donetsk-based Vostok battalion. He feels it is his patriotic duty to fight. "I'm Russian. I was born in the USSR. My father is Russian. I have to fight. These are my people," he says. "But I have no ill feeling towards Germany. Germany is a good country - everything is OK there, the laws, the life for children."

Though he was born in Russia, Sergei insists he is not part of the Russian army. He says he learned to handle weapons in Kazakhstan, where he grew up. "There's no Russian army here," he says. "It's the people who live here [who are fighting]. They want to live on their own land, in their own city."

Sergei and his soldiers pull back to a nearby checkpoint, as fighting quickly escalates from gunfire to exchanges of rocket-propelled grenades. A mortar hits nearby and the troops start to prepare automatic grenades and rocket launchers. For them, there is no ceasefire. The latest Minsk agreement, which came into force last February, is simply holding back an advance, even though Sergei admits the rebel front line has crept forward by almost two kilometers since the deal came into force. "We're waiting for a command," says Sergei. "If there's a command to advance, then we'll go further. But we have to obey the Minsk agreement."

Sergei says he is not worried about taking on Ukrainian government troops in close combat on the battlefield, despite the fact they are now better trained and equipped than they were before, thanks to assistance from the US, British and Canadian military.

"No one can beat Russians," he says.

But he would like to see a peaceful resolution to the conflict. "We don't want war. We want calm, we want peace, because many children are dying. People here also don't want war. We want to find a peaceful solution between the two sides, without anymore fighting. Maybe (Ukrainian President) Poroshenko will reconsider and leave us in peace. We don't want to continue with the bloodshed. But if he [Poroshenko] doesn't want that and won't listen to us, then we'll carry on fighting. And we'll take what belongs to us."

The fighting intensifies around the checkpoint as he calmly drinks a cup of coffee and smokes a cigarette. Then Sergei climbs into his green flat-bed truck to make the high-speed, high-adrenalin dash away, down the deserted highway, his foot flat on the accelerator to avoid sniper fire. A portrait of Stalin, watches out for him from the back window. But despite his strong sense of Soviet pride, Sergei says he wants to return to Germany once the war is over, even though he does not know when that will be. "I don't know what will happen here," he says. "But we're going further. We're advancing. That's our land."

Donetsk rebels get their message across

New media outlets in the rebel-held Ukrainian city of Donetsk are taking part in a communications war to get out their pro-Russian message. DW's Kitty Logan visits the unrecognized state's mouthpiece. (26.06.2015)

NATO is providing Ukraine with additional support in detecting mines and overseeing its airspace. Secretary-General Jens Stoltenberg made the announcement while also calling on Ukraine to press ahead with reforms. (25.06.2015)

How can international observers maintain their credibility in the middle of an armed conflict that is accompanied by an obscene propaganda war? OSCE observers talk about their mission during the DW Global Media Forum. (24.06.2015)