The Constitutional Court ordered that Ildar Dadin be immediately released from detention. He was the first to be convicted under the Kremlin's tightened regulations against anti-government protesters. 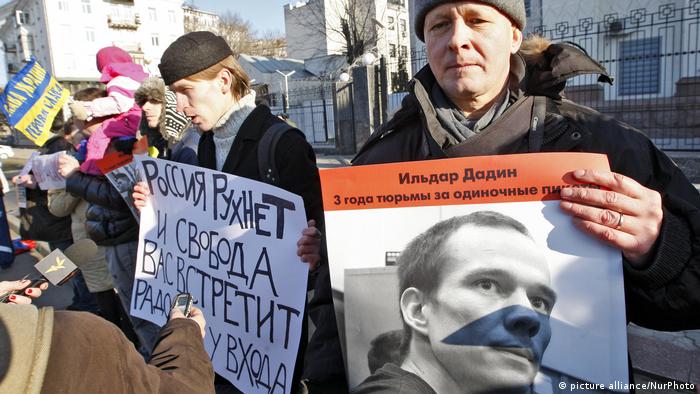 In 2015, Dadin was the first person to be convicted under strict new laws regulating anti-government demonstrations. Under the statute, violating protest rules more than twice in a 180-day period became a felony.

An outspoken supporter of Kremlin critic Alexei Navalny, Dadin regularly protested against President Vladimir Putin's infamous "gay propaganda" law and Russian military action. He was sentenced to three years in prison, though the term was later reduced to 30 months on appeal.

Council of Europe Secretary General Thorbjorn Jagland welcomed the court decision, saying the "freedom of assembly is fundamental to democracy."

"The Supreme Court ruling is based on an earlier judgment from the Russian constitutional court, which rightly said that repeated violations of rules on public gatherings should be seen as a criminal offense," Jagland said.

Last November, Dadin said that he was being tortured by prison guards. He said that they had beaten him and threatened to rape and murder him. A subsequent investigation found that the situation was serious enough for the activist to be moved to a different prison.

The outcry reached such a fever pitch that Kremlin spokesman Dmitry Peskov said that the case merited "the closest attention" from the government, and that President Putin would be informed.

On February 10, the Constitutional Court decided to order a review of Dadin's case. On Tuesday, while dismissing the charges against him, the judges also said that the protest regulations needed to be applied more proportionately.

Vladimir Kara-Murza had suffered kidney failure and was briefly in a coma due to poisoning by an unknown substance. He is known for his human rights advocacy and work with other Putin critics, including Boris Nemtsov. (19.02.2017)

A Russian court has again found Putin-opponent Alexei Navalny guilty of embezzlement in a case dating back to 2013. The verdict bans him from holding political office, but he said he'll run in the 2018 presidential poll. (08.02.2017)