A Russian court has again found Putin-opponent Alexei Navalny guilty of embezzlement in a case dating back to 2013. The verdict bans him from holding political office, but he said he'll run in the 2018 presidential poll. 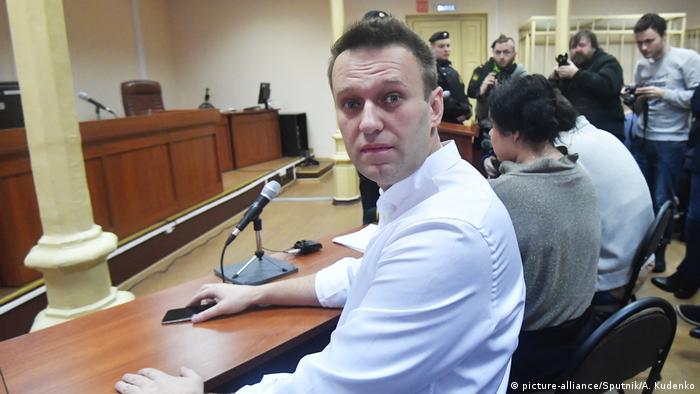 A court in Kirov, nearly 800 kilometers (500 miles) east of Moscow, found Alexei Navalny guilty of embezzlement, in a case that had been overturned in European courts and now retried in Russia. He has said he will appeal the ruling.

The court's decision excludes Navalny from 2018's presidential election, but Navalny said he will run for election anyway.

"We don't recognize this ruling. I have every right to take part in the election according to the constitution and I will do
so," he said. "I will continue to represent the interests of people who want to see Russia a normal, honest and non-corrupt country."

Prosecutors had called for Navalny to be given a five-year suspended sentence. Judge Alexei Vtyurin found Navalny guilty but is yet to pronounce the sentence. Rulings in Russian courts can take hours and even days.

Navalny had already been convicted of embezzlement in 2013 in Kirov in a case involving Russia's state timber company, Kirovles. According to the state-run Russian Legal Information Agency (RAPSI) Navalny had organized the theft of over 10,000 cubic meters of timber worth about $500,000 (470,000 euros) from Kirovles in 2009, while he was serving as an adviser to the Kirov Region governor. The 40-year-old lawyer already received a 5-year sentence in the first trial, which later was suspended on appeal. His supporters condemned the move, which effectively barred him from running for public office for the duration of the conviction, as it was politically motivated.

Navalny later filed a complaint with the European Court of Human Rights (ECHR) which ruled last year that he had been deprived of having a fair trial, ordering Russia to lift the conviction. Russia's Supreme Court therefore ruled that he and his co-defendant would have to stand trial again in the same city on the same charges.

Russian law bans anyone convicted of a serious crime of running in elections.

During a break in the proceedings, Navalny told reporters that he and his lawyers had compared the verdict with the text of the 2013 verdict against him, and found the two to be identical.

"You can come over and see that the judge is reading exactly the same text, which says a lot about the whole trial," Navalny said, adding that even the typos in the text were identical in both rulings.

"They were too lazy to write another one. It was a demonstration that they don't give a damn about the European Court and can take the old verdict," Navalny claimed.

Alexei Navalny had offended the Kremlin in December by announcing his intention to run for president in 2018 before President Vladimir Putin ever got to declare his own participation in the race. Navalny then went on to open the first regional office for his presidential bid in St. Petersburg earlier in February, despite the court verdict to bar him from running. Meanwhile an associate of Navalny's said that he would carry on with the campaign.

Kremlin critic Navalny said at the opening that "the Kremlin will do its best not to let me participate in the election." On his website, Navalny vowed he would continue his election bid regardless of the outcome of the court case:

"I consider I have the moral and legal right to take part in these elections," he said, adding that if found guilty, he would repeat the same steps to get the sentence overturned "before the official start of the campaign".

Opinion polls suggest, however, that he has substantially less backing among voters than Putin, having been targeted in a series of legal probes in the past which resulted in months of house arrest. Alexei Navalny was, however, the runner-up in Moscow's 2013 mayoral race against a Kremlin-backed incumbent. As he was appealing against the Kirov verdict at the time he was not formally convicted and could run for public office.

The end of Navalny's trial comes at a time when Russia's opposition is suffering a string of setbacks. Following the February 2015 murder of Putin opponent Boris Nemtsov, another dissident, Vladimir Kara-Murza, continues to be hospitalized in a coma with organ failure after suffering "acute poisoning" last week, according to his wife.

There has been no confirmation of foul play over the incident, which came two years after an earlier suspected poisoning nearly killed Kara-Murza.

Russians opposed to President Vladimir Putin are in a state of despair after Boris Nemtsov's murder, says Andrei Kolesnikov of the Carnegie Moscow Center. He can see no one stepping in to fill the Kremlin critic's shoes. (02.03.2015)