A Russian film crew has landed on Earth after filming scenes for the world's first feature movie shot in space.

A Russian actor and a director have returned to Earth after spending 12 days on the International Space Station (ISS) filming scenes for the world's first movie shot in space.

Yulia Peresild and director Klim Shipenko landed in a Soyuz space capsule on Sunday with veteran cosmonaut Oleg Novitskiy after a 3 1/2-hour trip from the ISS.

The capsule descended under a red-and-white striped parachute after entering Earth's atmosphere and landed in Kazakhstan's steppes on schedule at 06:36 CET, according to footage broadcast live by the Russian space agency.

"The descent vehicle of the crewed spacecraft Soyuz MS-18 is standing upright and is secure. The crew are feeling good!" Russian space agency Roscosmos tweeted.

The crew left for the space station on October 5 to shoot segments of a movie titled Challenge.

The makers of the movie have been tight-lipped about its plot and budget, but it is centered around a surgeon who is sent to the ISS to save a cosmonaut.

Peresild is playing the surgeon while Novitskiy — who has spent over six months in space — is to star as the ailing cosmonaut. 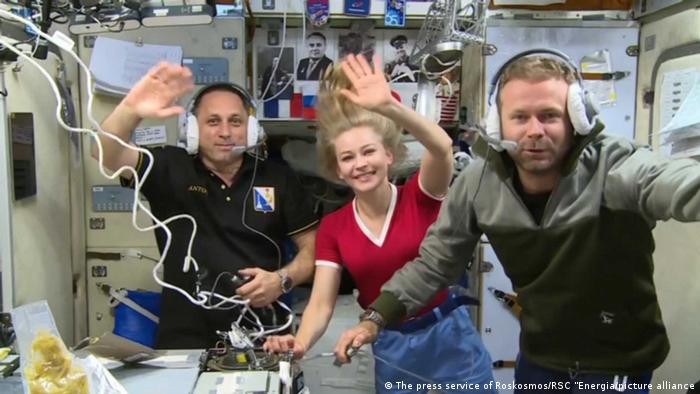 If all remains on track, the Russian film will beat a Hollywood project announced last year by actor Tom Cruise with NASA and private company SpaceX.

After Sunday's landing — which will also be featured in the movie — the film team were taken to a tent for medical examination, where all appeared healthy.

"I'm feeling a bit sad today. It seemed that 12 days would be a lot, but I did not want to leave when everything was over,'' Peresild said on state television.

More scenes of the film remain to be shot on Earth and the release date is yet to be decided.