Russia's state forest watchdog says fires covering hundreds of hectares have been recorded on lands contaminated by the Chernobyl disaster. Experts warn that the blazes could lift nuclear particles into the atmosphere. 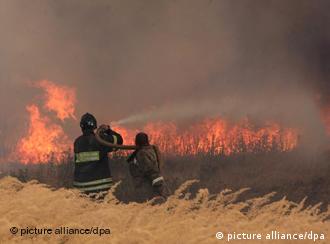 The Russian wildfires are the country's worst in decades

Wildfires covering hundreds of hectares were recorded in Russia's Bryansk region near the border to Belarus and Ukraine throughout the past week, the country's state forest watchdog said on Wednesday.

"According to data from August 6, in the Bryansk region alone 28 fires covering an area of 269 hectares (664 acres) were recorded on these radioactive lands," an official told Russia's Interfax news agency. "There are maps of the [radioactive] contamination, and there are maps of the fires. Anyone can put the two together. Why deny this information?"

Earlier this week, officials from the Russian emergency ministry denied there had been wildfires in the Bryansk region, after concern had been raised over blazes reaching the highly contaminated areas resulting in nuclear particles being lifted out of the soil and into the atmosphere. 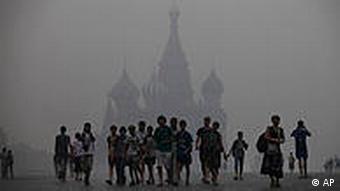 Smoke from the fires has blanketed the country for days

Emergency Minister Sergei Shoigu added on Tuesday that a team of experts had conducted a thorough check of the area and concluded that there was no visible increase in radiation levels.

Environmental group Greenpeace, meanwhile, has reiterated warnings of the danger of the fires in the contaminated areas. Vladimir Chuprov, the head of Greenpeace Russia's energy unit, told Deutsche Welle that the Russian government was attempting to "hide the real danger" of the wildfires.

"This is in many ways a repeating of Chernobyl, of the mistakes made by the government in 1986 when they failed to release any information on the risks and the danger of the reactor explosion."

With that being said, Chuprov was quick to make it clear that the danger of the wildfires was nowhere near that of the Chernobyl disaster.

"The fires in Bryansk are more than capable of lifting radioactive particles from the soil, but this will result in a release of much lower levels of radiation compared to [what was] released at Chernobyl." 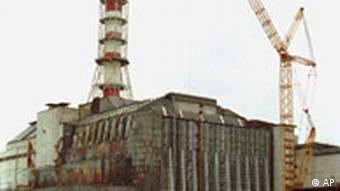 Officials in Germany, meanwhile, have not dismissed the possibility of danger for Western Europe as a result of the wildfires in Bryansk.

Professor Edmund Lengfelder, chairman of the German Society for Radiation Protection, told German public radio on Wednesday that the chance of radioactive particles entering the atmosphere was "very large" and that these could travel up to thousands of kilometers depending on wind conditions.

"Nobody can be sure about the distance these particles could travel in the wind. For this reason, it is necessary for the safety of the German people that the radiation authorities keep an eye on the air activity in Russia and to inform the German people in case any danger arises," Lengfelder said.

Germany's Federal Office for Radiation Protection said on Wednesday that the wildfires in Russia posed no danger to Germany or western Europe.

It added that such fires on contaminated lands were only capable of affecting the "immediately surrounding region."

Foreign aid arrives in Russia as battle against blaze continues

International aid began trickling into Russia on Monday as the country continues efforts to contain widespread forest and peat bog fires. Authorities said fires that threatened a nuclear site were under control. (09.08.2010)

Fears of radioactive contamination as fires near polluted land (06.08.2010)

Wildfires in Russia will end up costing the state several billion euros (11.08.2010)

The International Atomic Energy Agency and UN Secretary-General Antonio Guterres have called for the establishment of a demilitarized zone around the Russian-held Zaporizhzhia nuclear power plant in southern Ukraine.