Kirill Serebrennikov, an acclaimed Russian film and theatre director known for his liberal and innovative productions, has been found guilty of misappropriating over €1 million in government funding. 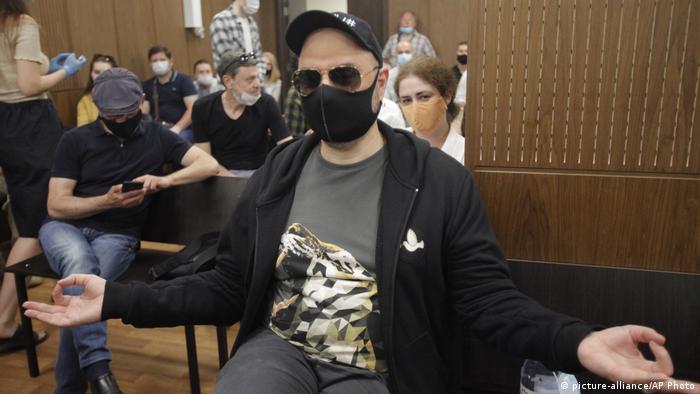 The 50-year-old and two co-defendants were charged with embezzling 129 million rubles (about €1.6 million, $1.8 million) out of 216 million rubles worth of Russian Culture Ministry funding for the Platforma arts project, which was founded and managed by Serebrennikov between 2009 and 2015.

The prosecution asked for a six-year prison sentence, but the court later imposed a three-year suspended sentence. Serebrennikov has rejected the charges as absurd and pleaded innocent.

A fourth defendant, former government official Sophia Apfelbaum, was convicted of negligence and fined; the fine was immediately lifted because of a statute of limitations.

Several hundred actors and supporters gathered outside the court for Friday's verdict, some wearing T-shirts with the slogan "Free Kirill!"

"I came here because this trial isn't about the money. It is a trial about creative freedom — about whether it can exist in Russia — or not at all," theater critic Elena Pokorskaya told DW.

Mark Rudenstein, Kinotavr Film festival founder questioned why Serebrennikov had been singled out:

"There is only government-led horror and madness here. I don't even know where this case came from. I doubt Putin himself cares enough about Serebrennikov to come up with it."

Serebrennikov was first arrested in 2017 and spent 18 months under house arrest before being released on bail.

Last year, the case nearly fell apart due to "inconsistencies" before it was restarted under a new judge.

Serebrennikov currently heads the Gogol Center, one of Moscow's top theater venues. This week, nearly 3,500 artists signed a letter to the culture ministry asking them to withdraw the charges against the director.

The guilty verdict is being considered a blow to artistic freedom in Moscow's liberal arts scene. Serebrennikov is known for fusing theater, film, modern dance, new media and music. His Platforma art project enjoyed a cult status among young Muscovites.

After Serebrennikov became the artistic director of the Gogol Center in 2012, the venue became a home for Moscow's liberal-minded artists and intelligentsia.

However, Serebrennikov has generated controversy among Russia's conservative hierarchy with his cinematic works.

His film The Student, which screened at Cannes in 2016, was targeted by conservatives over its portrayal of a student who becomes a religious fanatic.

The director has also criticized the Russian state's treatment of the LGBTQ community, and its seizure of Crimea in 2014.

Serebrennikov said in his closing remarks in court this week, "the youth always choose freedom," adding this can give "artists and spectators the feeling that the ideals of freedom will sooner or later become a foundation of our lives in this country, too."

Kirill Serebrennikov has been under house arrest, with no access to a phone or the internet for two years. But that hasn't stopped him from preparing to launch a modern take on Verdi's Nabucco in Hamburg on Sunday. (08.03.2019)

Russian filmmaker Kirill Serebrennikov has won a prestigious Nika Award for best director in Moscow, despite being under house arrest. His latest movie "Leto" ("Summer") tells the story of two Soviet rock stars. (31.03.2019)