Russian and Syrian government planes have targeted rebel-held areas of Aleppo in a bid for the rebel's last supply line. Meanwhile, hundreds have fled "Islamic State"-held areas of northern Syria amid mass abductions. 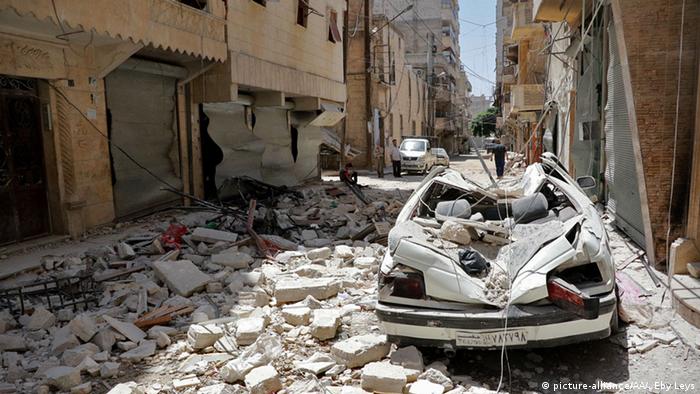 The Russian airstrikes targeted Castello Road, the last route out of the opposition-held eastern part of the city. A child was one of two people killed during strikes on an opposition neighborhood, the White Helmets civil defense group reported.

"In the past two days, my kids and I haven't been able to sleep all night because of the huge blasts, the likes of which we haven't heard before," 38-year-old shopkeeper Abu Ahmed said.

The government offensive around Aleppo comes one day after Lebanese militant group Hezbollah pledged to send more fighters to join the "greatest battle" of the war.

In eastern Syria, at least 47 people - including 31 civilians - were killed on Saturday during airstrikes on a village controlled by the "Islamic State" (IS) group, the Observatory reported.

The monitor added that the strikes were conducted by regime and Russian warplanes, which hit the militant-controlled village of Quoriya in the eastern Deir al-Zour province. Some of the dead were children. 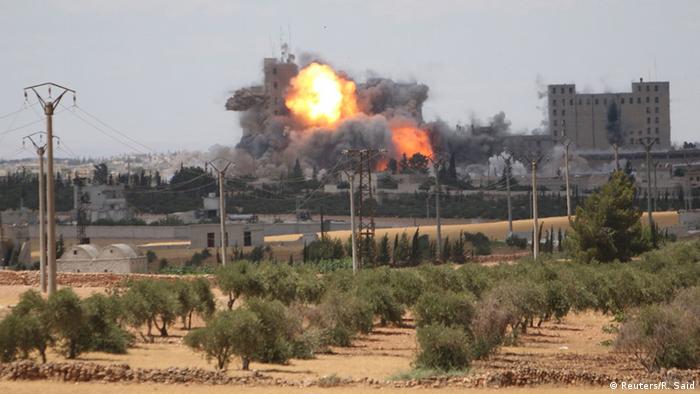 Mass abductions by IS

News of the strikes comes as the US-backed Syrian Democratic Forces (SDF) are pushing against IS fighters in the northern Syrian town of Manbij, which is located less than 20 kilometers (12 miles) from the Turkish border.

Hundreds of Kurds fled the area on Saturday as SDF forces clashed inside the town, which is a key stronghold for the militant group.

An SDF spokesman told The Associated Press that Kurdish families on the run from IS have been struck by mines and targeted by IS snipers.

"Civilians are defying death in order to leave areas controlled by Daesh," spokesman Sherfan Darwish said, using an Arabic acronym for IS.

The exodus was prompted by mass abductions by IS fighters in recent weeks. The militants abducted around 1,000 civilians - the majority of whom are Kurdish - in Aleppo province over the past three weeks, and an additional 120 in the past four days alone.

Those abducted were reportedly forced to build fortifications in retaliation for the assault by the SDF and Kurdish forces.

In the battle for Manbij, 463 IS fighters have been killed while the SDF has lost at least 89, the Observatory reported.

Syrian rebels have pushed back "Islamic State" militants from northern Aleppo, lifting a monthlong siege of the town of Marea. A monitoring group says the retreat is a sign that IS is under pressure. (08.06.2016)

Syrian Kurdish forces backed by US troops are trying to regain control of a prison housing "Islamic State" suspects. Kurdish authorities previously said they had thwarted the breakout at the facility.