The UK and France have accused Russia of possible war crimes as the Syrian army-led offensive entered its fourth day. Thousands of civilians remain trapped in Aleppo amid a brutal campaign to uproot rebels in the city. 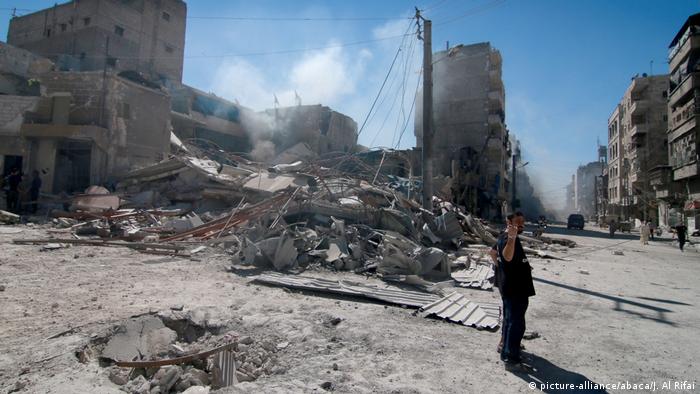 The fight over who bombed an aid convoy in Syria shows that the UN doesn't have an effective strategy for helping people in war-torn areas. Germany may be able to play an increasingly important role, writes Ines Pohl.

Rebels have retaliated by closing water pumps for government-held areas of Aleppo, affecting 1.5 million people. The UN has called on all parties to "stop attacks on water infrastructure," considered a war crime. (24.09.2016)

Addressing the Security Council, US ambassador to the United Nations Samantha Power accused Moscow of "barbarism" while Russian and Syrian warplanes pounded Aleppo as part of a renewed offensive against the rebel-controlled eastern half of the city.

Residents and rebels said hundreds of people had been killed in the new strikes on Aleppo, where water supplies to some two million people in government and rebel areas have been cut off since a US and Russian brokered ceasefire broke down last week.

"Instead of helping get lifesaving aid to civilians, Russia and Assad are bombing the humanitarian convoys, hospitals and first responders who are trying desperately to keep people alive," Power said.

However, Russia's UN ambassador Vitaly Churkin told the Security Council that his country wanted a ceasefire and negotiations between the warring parties in Syria, but "bringing a peace is almost an impossible task now."

He accused the United States of failing to control rebels, and separate so-called moderates it backs from "terrorist" groups, in particular the al-Qaeda-linked Levant Conquest Front, formerly al-Nusra.

The French and British foreign ministers also directed their verbal attacks at Russia, saying Moscow could be guilty of war crimes.

The fierce fighting in Aleppo and the bombing of an aid convoy last week effectively collapsed the ceasefire deal. Since then, Moscow and Washington, which back opposing sides in the Syrian civil war, have been accusing each other of not implementing the nationwide ceasefire.

British Foreign Minister Boris Johnson said the bombing of an aid convoy last week would "constitute a war crime" if it was done willingly, adding that the ongoing bombing in Aleppo was "absolutely barbaric."

"Does Russia think that it can install confidence and trust with its partners by simultaneously negotiating a cessation of hostilities and supporting the regime, which is bombing Aleppo?" asked Delattre.

Despite the war of words, UN Syria mediator Staffan de Mistura appealed to the Council to come up with a way to enforce a ceasefire. "I am still convinced that we can turn the course of events," he said, adding that he would not stop trying to bring peace in Syria.

'Sustained and intense bombing' in Aleppo

The UN has been particularly concerned about the intense fighting in Aleppo. UN Secretary-General Ban Ki-moon urged world powers to end the "nightmare" in Syria by putting aside their differences.

"What excuse is there for anything less than determined action to stop the mayhem? How much longer will all those with influence allow such cruelty to continue?" he asked. "I urge all involved to work harder for an end to the nightmare."

"The Assad regime and with direct participation of its ally Russia and Iranian militias has escalated its criminal and  vicious attack on our people in Aleppo employing a scorched earth policy to destroy the city and uproot its people," a statement signed by 30 rebel groups said on Sunday.

More than 300,000 people have been killed and half the population displaced since the Syrian civil war erupted nearly six years ago, when the government launched a vicious crackdown on peaceful protesters calling for Assad to step down.