Turkey and Russia have signed a deal to build a major gas pipeline under the Black Sea. A gradual rapproachment since a falling out last year shows the two can pursue a pragmatic relationship. 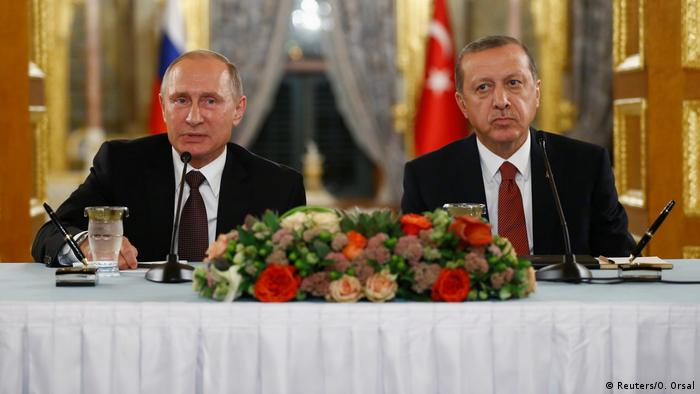 Putin arrived in Istanbul for the World Energy Congress, his first visit to the country since Turkey downed a Russian jet along the Syrian border last November, triggering a crisis. Turkey apologized for the jet incident in June, leading to a gradual improvement in relations and Moscow clawing back damaging sanctions on the Turkish economy.

In a sign Moscow and Ankara remain capable of compartmentalizing political differences in pursuit of economic deals, the two sides on Monday signed an inter-governmental agreement to build the stalled TurkStream gas pipeline under the Black Sea to Turkey.

Putin also announced Russia would resume imports fruits and vegetables from Turkey and the two sides set up an investment fund to "boost relations in many areas, such as tourism, energy, agriculture and transport," Turkish state-run Anatolian News Agency reported.

First put forward by Putin in 2014 after plans to build a similar South Stream gas pipeline to Bulgaria collapsed under EU pressure, TurkStream envisions Russia bypassing Ukraine by bringing gas to Turkey and onto Europe through Greece.

For Russia, which is already Turkey's largest gas provider, the pipeline would allow it to reduce dependence on Ukraine and Eastern Europe while helping to further seal its dominance over European gas markets.

Turkey, meanwhile, aims to become a regional oil and gas hub for energy from the Caucusus and Central Asia, the Middle East and Eastern Mediterranean in order to ensure domestic energy security and cement the country's geostrategic importance.

Monday's meeting was the third between Erdogan and Putin since the June apology over the jet downing. It signals Russia and Turkey are well on track to resume previous close ties despite larger geopolitical differences, especially over Syria.

"Our relations will (improve) in many fields, be it in defense industry, political, economic, trade, tourism or culture," Erdogan told reporters. "We will make up for lost time in the coming days," he added.

Turkish-Russian relations were already experiencing turbulence before the jet incident due to Moscow's support for Syrian president Bashar al-Assad, and finally its military intervention in Syria last September.

Ankara has been one of the biggest backers of rebels seeking to oust Assad, who is also backed by Turkey's regional rival Iran. Yet nearly a year after Russia's intervention it has become clear to Ankara that Assad is not going away anytime soon as rebels suffer a series of battlefield setbacks -- and with that there has been a recalibration of Turkey's policy in Syria.

Ankara has even been relatively mute recently as a humanitarian crisis in Aleppo grows and the rebels' long-term position looks increasingly untenable in the city. On Monday, Putin and Erdogan said they discussed delivering humanitarian aid to Aleppo and other forms of military and intelligence cooperation.

Turkey has become more worried about the "Islamic State" and the gains of US-backed Syrian Kurdish YPG militia along its border than the fate of Assad, recently softening its position on what a political transition in its neighbor would look like. Ankara had been concerned that the deterioration of relations with Russia would push Moscow to use the Kurds against Turkey.

The YPG is affiliated with the outlawed Kurdistan Workers' Party (PKK), which reignited a bloody insurgency in Turkey last year.

Reconciliation with Russia has enabled Turkey to intervene in northern Syria to kick out IS from a section of its border and prevent the YPG militia from advancing further west across the Euphrates -- a redline for Ankara.

The patching up of relations with Russia comes as Turkey found itself isolated diplomatically, not least with the United States over differences over the Syrian Kurdish YPG, viewed by the US as some of the best fighters against IS. The same diplomatic isolation factored into Ankara's reconcilliation with Israel.

The rapproachment also comes as Turkish relations with the West have been tested following the July 15 failed coup attempt and subsequent purges. Putin wasted little time in the wake of the coup attempt, throwing his support behind Erdogan and attempting to drive a wedge between the NATO member and the West.