Rapprochement between Russia and Turkey | Middle East | News and analysis of events in the Arab world | DW | 09.10.2016

Rapprochement between Russia and Turkey

What have been the most important stages in the recent history of Russian-Turkish relations? With Russian President Vladimir Putin visiting Istanbul, DW looks back at some of the major developments. 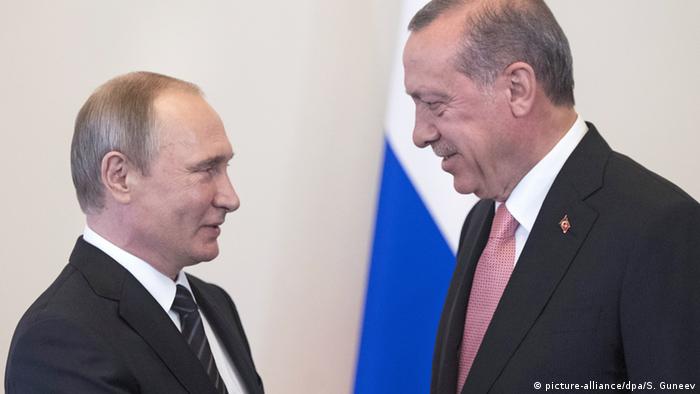 On Monday (10.10.2016) the Russian president, Vladimir Putin, visits Turkey. This visit was unimaginable just a few weeks ago. Between last November and June of this year, and despite years spent forging a successful relationship between Turkey and post-Soviet Russia, Ankara and Moscow were in a state of cold war. DW looks back on their history over the past 25 years.

1. The end of the Soviet Union, and small businesses

Rapprochement between post-Soviet Russia and Turkey was swift. There was great demand in Russia for Western-style fashions, and small Turkish businesses stepped up to meet it. Cheap clothing from Turkey soon conquered the Russian markets. Turkish companies quickly found a niche in the Russian construction industry, and the 1997 agreement to supply gas via the Blue Stream pipeline also provided a strong stimulus.

2. The heyday of friendship and cooperation

3. The litmus test of Crimea, and the Turkish Stream pipeline

2014 was a litmus test for the relationship. Outwardly, Turkey reacted calmly to Russia's annexation of the Crimean Peninsula, despite Turkish fears for Tatars living in Crimea, to whom they are ethnically related. The Turkish-Russian relationship appeared to survive this test. The best proof of this was the statement on December 1, 2014, in which Moscow and Ankara announced the construction of a new gas pipeline, Turkish Stream, which would run from Russia to Turkey via the Black Sea. Turkish Stream would replace the unsuccessful South Stream pipeline project.

4. Recognition of the Armenian genocide, and the Su-24 fighter jet

However, negotiations on the construction of the Turkish Stream pipeline were delayed, and tensions increased: among other things, in relation to the conflict between Armenia and Azerbaijan over the enclave of Nagorno-Karabakh. And when the Russian president officially used the word genocide in reference to the killing of Armenians by Turks during the First World War, it was a big blow for Ankara. Erdogan responded by reminding Moscow of Crimea, and the forced resettlement of entire peoples under Stalin.

However, what Erdogan finds most uncomfortable is Russia's interference in the civil war in Syria. Ankara has for years been pursuing completely different goals from Moscow on the Syrian front, without success. Turkey wants to topple the Syrian president, Bashar al-Assad; Russia, however, supports him.

An incident on November 24, 2015, brought Turkish-Russian tensions to a head. The Turkish military shot down a Russian Su-24 fighter jet; sources disagreed as to whether the jet was over the border zone between Syria and Turkey or, as Ankara declared, had crossed into Turkish airspace. Moscow responded by imposing comprehensive sanctions: a ban on the import of Turkish agricultural products, visa requirements for Turks, the freezing of the majority of joint Turkish-Russian economic projects, the end of joint cultural initiatives, and the departure of Russian students from Turkey. But what hit both sides the hardest was Russia's ban on package holidays to Turkey.

In June 2016 Erdogan wrote a letter to Putin in which he apologized for the shooting down of the fighter jet. The Turkish president emphasized that he still regarded Russia as a "friend" and "strategic partner," and said he wanted to improve bilateral relations again. Putin responded by lifting the ban on the sale of package holidays to Turkey. The plan is for other sanctions gradually to be lifted as well.

However, a meeting between Erdogan and Putin in St. Petersburg in August of this year showed that while both parties are prepared for a rapprochement, neither wants to alter its position on foreign policy. The subject of Syria was simply not addressed. The two sides agreed to continue negotiations over the construction of the Turkish Stream pipeline and the Russian-designed nuclear power plant in Akkuyu, as well as the creation of a free trade zone. However, even now, cooperation between Turkey and Russia cannot be said to have returned to previous levels.

Presidents Erdogan and Putin will be drafting a new joint road map in St. Petersburg. In return for Erdogan’s call for more trade, Putin may ask Ankara to jump start ties with Syria, Aram Duran reports from Istanbul. (08.08.2016)