Germany's top diplomat has rebuked Moscow for contributing to the "terrible humanitarian catastrophe" in Aleppo. The UN has called on Russia to hand over control of a humanitarian operation in the besieged city. 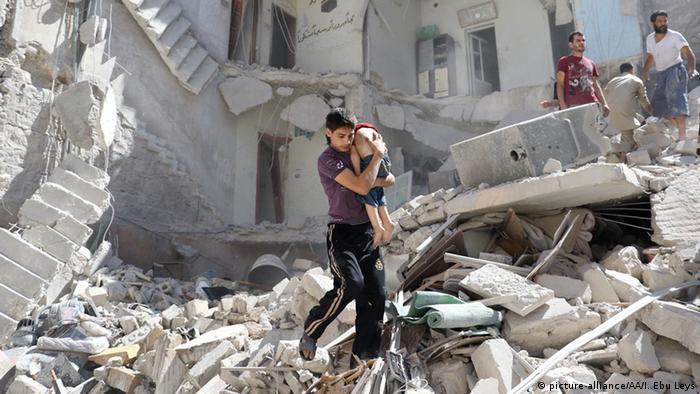 German Foreign Minister Frank-Walter Steinmeier on Friday placed part of the responsibility for the humanitarian crisis unfolding in Syria's Aleppo on Russia.

Russia and Syria have offered to open a "humanitarian corridor" after rebels and civilians were surrounded. A full assault to retake eastern Aleppo could trigger a humanitatrian crisis.

"Russia shoulders particularly great responsibility in this difficult situation on account of its support for the Syrian army and air force," Steinmeier said in a statement from Berlin.

He urged Moscow to "implement a ceasefire" and work with the UN to facilitate "humanitarian access" to Aleppo's besieged residents, who number between 250,000 and 300,000 people.

"Exercising military restraint and allowing humanitarian aid to reach people trapped in besieged areas are what is needed right now. We need there to be an end to violence and a return to the negotiating table," he added.

Remarks made by Germany's top diplomat come a day after the Syrian regime and Moscow announced it would launch a large-scale humanitarian operation by opening corridors in Aleppo for civilians to flee and rebels to surrender.

However, activists in Aleppo's rebel-held areas criticized the proposal, saying it is a front for the Syrian regime to flush out the opposition and arrest them after government troops seized the sole supply route into the area.

"Not only have they cut off the sole lifeline to eastern Aleppo, but they have killed children and women," said Brita Hagi Hassam, the head of the city's local council. "They have also bombed hospitals and vital places in order to force people into submission."

The Save the Children charity organization said a maternity hospital it supports in Aleppo's rebel-held area had been bombed on Friday, adding that casualties were reported.

Meanwhile, UN Syria envoy Staffan de Mistura on Friday called on Russia to hand over control of the corridors to ensure the operation is strictly humanitarian.

"Our suggestion is to Russia to actually leave the corridors being established at their initiative to us," de Mistura said at a press briefing in Geneva.

"The UN and the humanitarian partners … have experience. That's our job. Bringing humanitarian assistance and supplies to civilians, wherever they happen to be, is exactly why the UN is there," he added.

However, Russian Deputy Defense Minister Anatoly Antonov rebuked criticism that the corridors served other purposes aside from a humanitarian operation.

"We are ready to do everything we can to deliver aid to peaceful citizens who are hostages of the terrorists, and even to those militants who wish to lay down arms," Antonov said, according to Russian news agency Interfax.

US State Secretary John Kerry on Friday warned Moscow that if the humanitarian operation is a ruse, it would break US-Russia cooperation in Syria, where both are also fighting the "Islamic State" militant group.