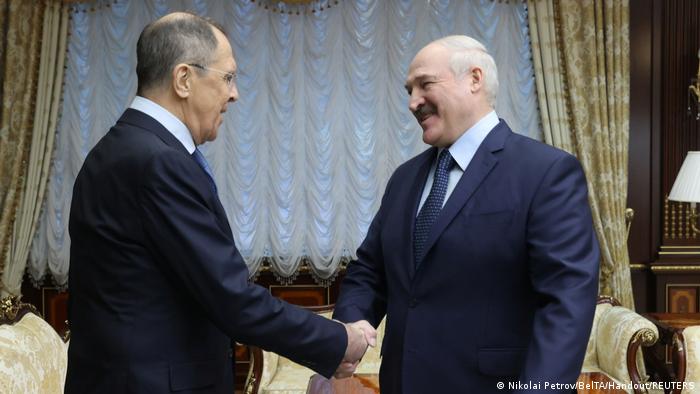 While visiting Minsk on Thursday, Russia's Foreign Minister Segey Lavrov piled up pressure on Belarus strongman Alexander Lukashenko to deliver on the promise of constitutional reform.

Lavrov said Moscow was worried about the unrest in the smaller country, where protesters have been demanding Lukashenko's resignation and accusing him of forging the results of the August election.

"We of course have an interest in the situation being calm, stable and we think that beginning the constitutional reform initiated by the country's leadership would contribute to this," Lavrov said.

What was Lukashenko's reform pledge?

The Belarus president has so far refused to step down, although he has hinted the government could call for a fresh election after changing the constitution. Lukashenko, who has been in power for over 26 years, has claimed that the country's political system has some authoritarian features and that a new system should be less reliant on the office of president.

He also pledged to launch such reforms during talks with Russia's President Vladimir Putin in September. However, Lukashenko did not follow up the pledge with any concrete steps.

The protesters have dismissed the talk of reform as the president's attempt to stall them.

Trouble between Moscow and Minsk

On Thursday, Russia's Lavrov expressed hope that the situation in Belarus would normalize with the help of "the initiative of the president of Belarus on constitutional reforms and modernizing political system."

"As President Putin has repeatedly stressed, we are interested in seeing these initiatives happen," Lavrov said.

Moscow has been backing Lukashenko throughout the latest crisis. However, cracks between Lukashenko and Putin have been growing for years. The Belarusian strongman has clashed with the Kremlin on a range of issues, including Moscow's bid to pull Minsk into a deeper political union. Ahead of the August election, Lukashenko had accused Moscow of trying to meddle in Belarusian affairs when his security forces arrested a group of Russian mercenaries.

Lavrov's latest statement could be seen as a signal to Lukashenko that Moscow's patience is wearing thin. While some observers believe that Moscow is preparing to replace the long-running president with another pro-Russian politician, others warn that the reform could deepen and formalize Russia's control over its closest ally.

On Thursday, Lavrov denied contacts between Moscow and the opposition in Belarus. He also accused the West of "blatant meddling" in the country's internal affairs.